Does Jelly Bean’s Easter Egg Hint at Another Name for the Next Version of Android?

In addition to numbers, Google names their versions of Android after sweets, Cupcake, Ice Cream Sandwich, and most recently, Jelly Bean. Almost everyone thinks that the next version of Android is going to begin with the letter “K”.

In my last episode of the Android Guy Weekly I talked a little about what features might be coming in the next iteration of the OS, an speculated about what the name might be. After all, how many sweets (other than name-brands) begin with the letter “K”? The general  consensus, as well as an off-the-cuff remark by someone “in the know” at Google I/O has been pointing us to “Key Lime Pie”. Mmmmmm, pie!

However, thanks to a quick eye, Alex from AndroidCentral may have found a hint at what’s coming next hidden in Jelly Bean’s Easter egg. 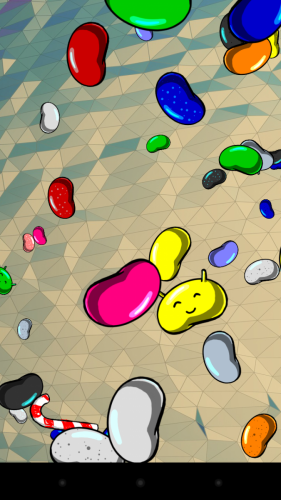 If you’d like to see the Easter egg for yourself, open settings, About phone, and tap four times on the Android version. One your screen shows the smiling, red jelly bean press and hold to get an interactive field of beans.

Perhaps. Then again, it could also be a Photoshopped hoax. If you can confirm the existence of the candy cane on your Jelly Bean flavored Android, please let us know in the comments — screenshots or videos would be helpful!

UPDATE: Phil from AndroidCentral wrote in and confirmed that the image was not Photoshopped and he’s seen the candy cane for himself. Like us, he’s skeptical that Google would call the next version “Kandy Kane”.