From Android skins to Android stock: a sweet & sour experience with the Google-edition HTC One

My journey from Sense 5 to stock Android on the Google-edition HTC One reveals the bane -and the beauty- of Android skins.

The skin/no-skin debate is the Coke vs. Pepsi divide of the smartphone space – if the cola war were an 80-20 split in favor of Pepsi, that is. Studies outlining user attitudes toward UI overlays are hard to come by, but there’s no real question about the prevalent feeling in the tech press: when it comes to Android skins, you can smell the disdain a mile away.

If you ask me, the almost-automatic hatred of skins is a tired, destructive artifact of a jaded tech media. It’s a holdover from the days when Samsung’s TouchWiz and HTC’s Sense were overwrought monstrosities sitting atop Android, bringing little added functionality to justify their too-flashy interface touches. Now that a version of Android exists that’s both functional and attractive, the argument goes, the days of cumbersome skins should be over. I don’t agree.

Neither, apparently, do the OEMs. Rather than succumbing to the withering criticism of the press, manufacturers developed their UI overlays further – and some flourished. Many skins got lighter, like Motorola’s MotoBlur, but others dug their talons even deeper into the fabric of Android. Samsung’s Galaxy S line, the world’s most successful Android smartphone family from the world’s leading handset manufacturer, carries one of the heaviest skins in existence: TouchWiz 5. And the One, the first HTC device in years to garner widespread acclaim in terms of its hardware and software, features a skin that reaches as deeply into the roots of the OS as any of the previous layers: Sense 5.

Android skins -which manufacturers prefer to call “third party UIs,” as Gizmodo helpfully reminds us– have survived not due to buyer ignorance or OEM stubbornness, but to their added utility. That’s a truth I learned rather quickly upon unboxing the Google-edition HTC One the manufacturer was kind enough to let us test, and it’s one I’ve been exploring over the past few days.

My experience with the Google-edition One comes on the heels of several months with its Sprint-branded counterpart running the full build of Sense 5, so the software differences between these otherwise-identical units are even more apparent. Some of these differences are welcome; others are just different; still others I could do without.

The sweet side of stock

The knee-jerk aversion to third-party UIs on Android devices is understandable, to a degree. For years, skins have been associated not just with cruft and bloat on Android phones, but with serious performance sacrifices as well. For the DIYer who still makes up an important portion of the Android user base, escaping from this skin-prison is often just a ten-minute hack job away; but for someone not comfortable with words like “rooting” and “modding,” the only way to get a stock Android experience until recently was to settle for a device without LTE, a device with a disable-able skin, or one of several outdated Nexus models.

So it was a real pleasure to hear at I/O 2013 that Samsung and HTC would be building “Google-edition” variants of their popular Galaxy S 4 and One smartphones. It was an even bigger pleasure to take the wraps off my very own loaner edition of the latter, and see a skinless Android experience greeting me on the other side of the lock screen. 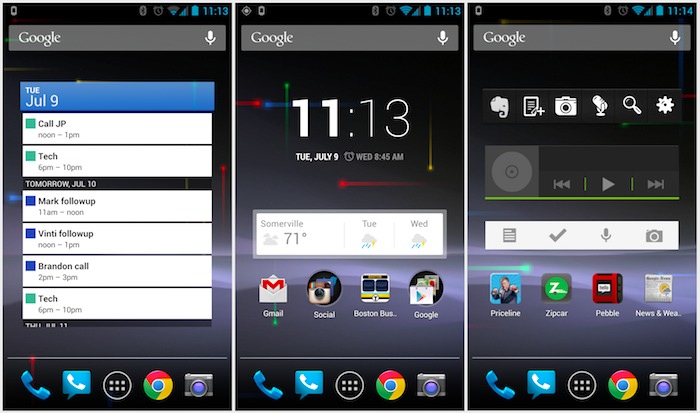 One of the nicest bits of running stock Android is being able to dismiss a lot of compatibility concerns. If a third-party accessory says it’ll run on Android, you can usually rest easier with a stock device than with a skin-runner. I found that to be true with the Pebble smart watch, which runs beautifully on naked Android 4.2.2, but  encounters problems with accessibility settings in some of Samsung’s TouchWiz builds.

There’s also the matter of stock Android being smarter than skins, in some ways. Sprint’s Sense-ified HTC One features an almost totally empty notification shade. It looks nice, but it doesn’t offer the utility of stock Android’s quick toggles, which provide easy access to switches for WiFi, screen brightness, Bluetooth settings, and the like. Sense also offers a very limited “phone options” window, with selections for power, airplane mode, and restart – and nothing else. Stock Jelly bean provides options to silence, vibrate, and ring alongside those controls, building in another avenue through which to control notification settings other than the volume rocker. (That doesn’t sound like much, but trust me: it’s a big deal if you listen to a lot of music or podcasts on your device.) And the scrolling list of multitasking cards in untainted Android makes a lot more sense, to my eye, than the three-by-three grid of tiny squares in Sense 5. 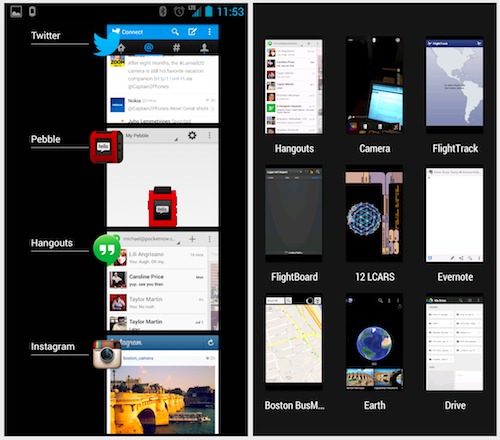 Running stock Android on the One is inherently geeky: it almost feels as though you’re getting away with something every time you wake the phone up to see Jelly Bean’s lock-screen widgets instead of Sense’s icon array. And, considering the target market for this device, that shouldn’t be a surprise: you really are running under the public’s radar, carrying a smartphone that looks like everyone else’s but delivers a “Google experience” that even the company’s vaunted Nexus 4 can’t match. Ideally, that experience will include the timely Android updates that have become a hallmark of the Nexus line – but only time will tell how valid that expectation is.

It’s not all rainbows and free ice cream, though. HTC built the One with its special version of Sense in mind, and there’s a handful of features I already miss on the stripped-down version of the device.

The sour side of Sense-lessness

The first time I really longed for Sense happened last night, in the midst of rehearsal for a play I’m working on. Wanting to encapsulate the feeling of a full night’s rehearsal in just a few photos and video clips, I reached for my One with the intention of firing up Zoe, the mode custom-built for just such an occasion. Instead, I was greeted with the stock Android viewfinder, with no quick shutters, no fun filters, and nary a Zoe to be seen. To add insult to injury, I didn’t even have enough room in our small theatre to take advantage of the one feature I did have: Photo Sphere.

Sure, the photos themselves were fine (more on that in a later piece) but the fun that HTC imbued in picture-taking with Sense 5 -the animated Gallery elements, the Highlight videos, the swipe-to-shift-cameras- was missing. It was just the Android viewfinder … which is actually prettier than the Sense version, but it offers much less meat on its bones. Could I have downloaded a suite of third-party apps to fill this gap in functionality? Sure, but it wouldn’t have been the same – and I didn’t really have the time, either.

And what of the much-maligned BlinkFeed? HTC’s custom social stream, permanently anchored to the left-most home screen in Sense 5, took a lot of heat earlier in the year for its inflexibility. People didn’t seem to mind its FlipBoard-aping UI, but instead took exception to its mere presence as a nonremovable, persistent component of the interface. 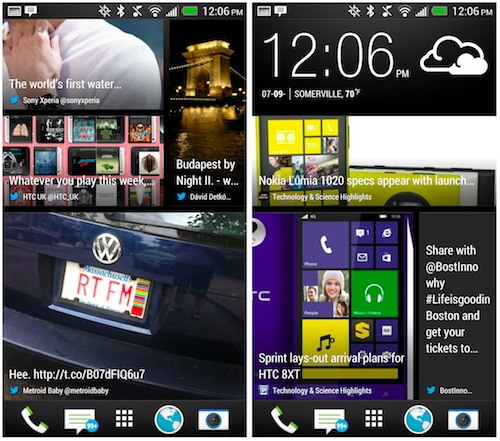 I was never one of those people. BlinkFeed has its shortcomings, but I like having it there, ready with a nice mix of news and social status updates so I can kill time while waiting for a train or walking down the street. Though the left-of-center homescreen is where my calendar widget normally resides on other devices, I was happy to relocate it in exchange for the pretty and functional BlinkFeed – and I miss the feed’s page-at-a-time scrolling on the Google-edition One.

On that last point: maybe it’s anticlimactic to end an examination like this on such a pedestrian note as software scrolling, but it’s important. Within Sense, lists slide by at very controlled rates. Numeric spinners stop at every multiple of ten. The app drawer and BlinkFeed scroll a page at a time – never more. Some consider it a speed brake, but to me it’s an expression of how HTC thinks the software should be used. In concert with other elements, like the reworked Messaging and Email apps, it’s a reminder of how invested HTC is in molding Android to fit the One through Sense – and that feeling of aesthetic unity between hardware and software is very definitely missing in the Google edition of this device. 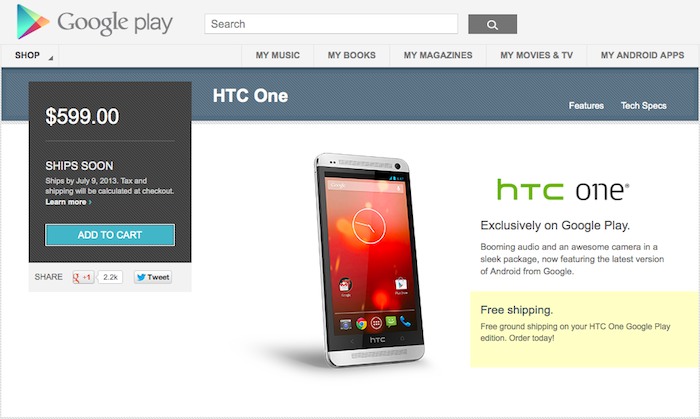 The Google-edition HTC One isn’t for the “average consumer.” It costs $599 in the Google Play store, $300 more than the similarly low-key Nexus 4 and $400-$500 more than carriers offer the standard One with a contract. This is a smartphone for developers and for enthusiasts; the vast majority of HTC One owners will get their devices from their wireless providers, along with a healthy subsidy and a heaping helping of Sense. So the question isn’t really “which one should I get?” – if you’re aware of the Google-edition One’s existence, odds are you’ve already made up your mind one way or the other.

The more interesting question, to me at least, is what the Google-edition phones say about the current state of Android skins. From where I’m sitting, it seems that while stock Android is nice to have, it carries sacrifices not everyone will be willing to make. Indeed, while most everyone in the press was busy bemoaning their existence, skins were slowly and quietly maturing, graduating from attractive nuisance to legitimate value-add. Far from being worthy of revulsion, it seems to me that third-party UIs like Sense are more relevant and important now than ever before.

HUAWEI has partnered with Qwant to offer its privacy-focused search engine services on the newly launched HUAWEI P40 series phones in Europe.