Cortana for Android leaks – get it now

Microsoft’s Cortana voice-powered virtual assistant is going cross-platform, with plans in motion to bring Cortana to both Android and iOS. When Microsoft first shared this news in late May, it spoke of making the initial Cortana Android app available sometime in June, with the iOS release following later in the year. However, by mid-June Microsoft had revised its schedule a little, and instead informed us that the first Android Cortana beta would land sometime in July. We still haven’t seen any sign of an official release, but today we’ve got the next best thing, as the Cortana Android app leaks.

You can snag the APK through the link below (as long as it lasts), but if you do so, know that you’re accessing the software and service outside official channels (and taking responsibility for any risks that follow). That said, we gave it a spin on our own Galaxy S6 Active, and it appears to be working just fine. Well, largely fine – it didn’t play nicely with the GS6A’s pop-up view, but that’s hardly Microsoft’s fault.

Despite earlier depictions as a “companion” app to Cortana on Windows 10 PCs, the app installed and ran without just fine for us without the need to connect it to a computer – just log in with your Microsoft account.

We’ll be going more in-depth with Cortana on Android (and iOS when it ultimately arrives) a little later, but for now this is your chance to give it a spin for yourself. Enjoy!

Update: It looks like this APK leaked from an Insider test that Microsoft just got started. The company says that it will be “releasing the beta publicly in the next few weeks.” 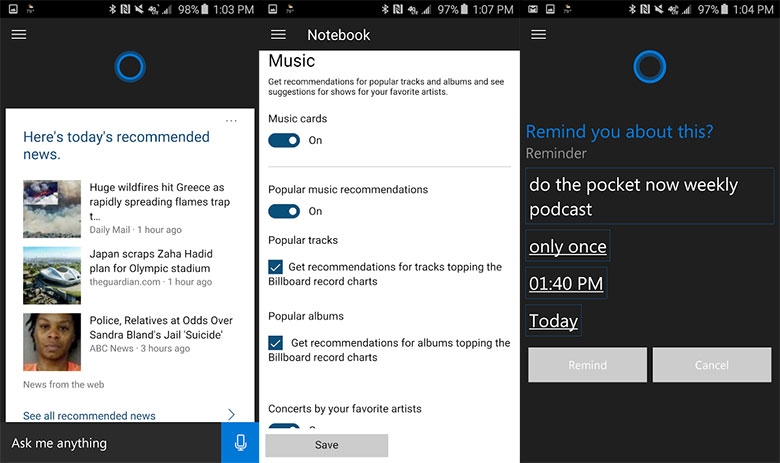 There will be some key design changes when the new model lands in stores later this year, including a smaller notch.

Samsung has listed the Galaxy A82 5G on its software update database, which is a clear indication that an official launch is not too far off.