Last week’s rumors of a color Pebble smartwatch may have just been confirmed, with a pic of such hardware appearing on Pebble’s servers.

Pebble’s countdown timer – the one we saw go live late last week – is already down to less than a day, promising big news tomorrow morning. Rumors have suggested that we could be looking forward to the next generation of Pebble hardware, one that would finally bring the smartwatch into the world of color. Specifically, we’ve heard that the first Pebble with a color display could be just about to debut, one that would also see the wearable’s screen grow to a slightly wider aspect ratio. We’ll have official word soon enough, but in the meantime it looks like the cat might be out of the bag, upon the discovery of the above image on Pebble’s servers.

While it’s already been taken down, the pic shown below here certainly appears to hit on many of the points made in last week’s rumor. Sure enough, the display is now color. And while it’s subtle, the screen dimensions depicted here do indeed reveal a wider panel.

And then there’s that bezel. If you thought the Pebble Steel was an important step forward for design, this might just be two steps backwards. Since we’re looking at this pic out of context, we suppose there’s always the possibility that this is a more rugged version of the new Pebble, and that it might also come in sleeker designs, but right now this is the beginning and the end of the evidence we have. 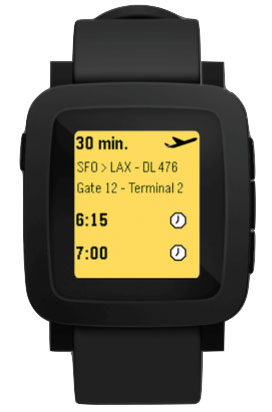 Source: Pebble (since removed)
Via: 9to5 Mac

Toda’s deals come from B&H and Amazon. You can get the 2018 iPad Pro, and the latest iPad and iPad mini on sale, along with other products