Chuwi SurBook, light on its feet, stomps all over Indiegogo goal

The Chinese manufacturer is headed into the Windows 10 convertible tablet arena with a lighter-weight device that keeps up in finish and battery life.

Yes, we’re talking about another Windows 10 convertible this week.

Chuwi’s known in some corners as the cutthroat tablet manufacturer. And as it is based in China, it has the ability to pull off products to scale in a snap. But every so often, it likes to involve its customers in the process and that’s what its latest Indiegogo crowdfunding campaign is all about.

The Chuwi SurBook is a convertible tablet that straddles the line of affordability while using one of the latest Intel Celeron chips based on the 14nm Goldmont architecture. Depending on what jobs you want to get done, you might be able to get the fit and finish of a Surface Pro or an iPad Pro without needing to cash in like crazy. 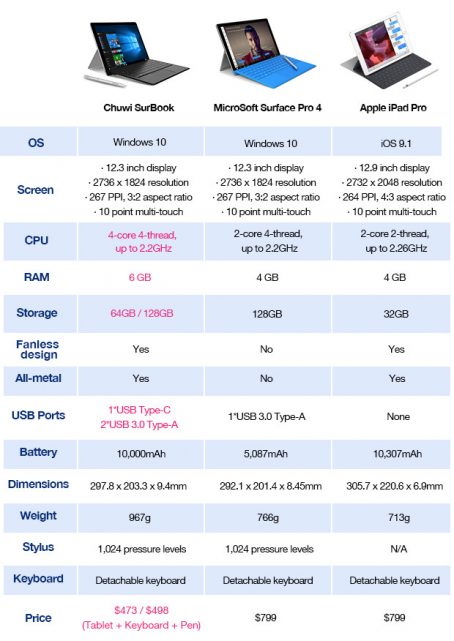 In addition to the specifications above (that are subject to change, so fair warning), the device feature’s a fold-out keyboard cover with backlit keys, a kickstand that extends out to 125 degrees and color options of black and purple.

Wi-Fi ac and Bluetooth 4.0 are in the tablet. Two full USB 3.0 ports are on the 9.4mm thick tablet along with a USB-C port, a microSD slot and a headphone jack. An active stylus will also be included that will support 1,024 pressure levels.

We’ve covered another blockbuster Indiegogo campaign for a Windows 10 2-in-1, the Eve V, and we were kinda spoiled with the levels of transparency that Eve Tech gave — the details seem a little more nebulous and changeable here. But if the company is able to get over $110,000 in the campaign’s first few hours online out of a goal of $30,000, maybe there’s something going on here.

MSRP for a 64GB tablet, keyboard and pen is $473. But perks packages at this “Super Early Bird” stage will mark down that price to $349. Getting the tablet itself would be just $299. Customers can also get a full SurBook set for the 128GB version for $399.

Shipments are scheduled to be fulfilled in July. Check out the source link below for more information.