Google Chromecast and Chromecast Audio Review are now available. What’s new, and should you buy one, or both?

In June of 2012 at Google I/O, Google’s developer conference, the company announced an all new product category designed to be conduit between your smartphone or tablet and your media. The product Google used to launch this category was called the “Nexus Q” and was offered for sale for the steep price of US$299. At the time, the orb-shaped device was supposed to let users cast audio to their high-end speaker systems, and could allow people to create their own party soundtrack through its “social, shared experience”. The product was eventually given away to those who attended I/O or had pre-ordered the device (myself included), and was quietly shelved because of its lack of functionality compared to products like Apple TV and limited support from apps and content providers. That allowed Google time to “go back to the drawing-board” to figure out how to “do it right”. In 2013 Google released the first generation Chromecast – an HDMI dongle aimed at bringing Nexus Q-like functionality to your TV, followed up by a second generation and audio-only version earlier this month. 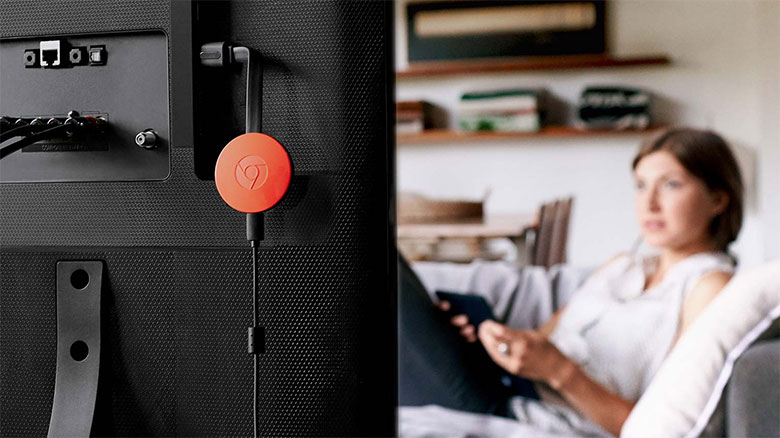 Put simply, Chromecast is a streaming media stick that you plug into an HDMI port on your TV or monitor.  Think of it like a Bluetooth speaker, for your TV:

The difference here is that instead of connecting via Bluetooth it’s over WiFi (or Ethernet, with an optional adapter), and instead of streaming directly from your device, Chromecast streams directly from the source (either a site on the Internet or a local media server). This approach lets you offload the work from your phone to Chromecast which results in much better playback (since there’s one less link in the chain). You can even start a movie, then leave the house and Chromecast will continue playing it. You can cast your phone’s screen to Chromecast, too, but that’s only for those times when your app isn’t Chromecast enabled – yet.

This year’s Chromecast is bigger than the original, but other than incremental improvements, it does essentially the same thing as its sibling – which is a very good thing! If you have the previous Chromecast you’ll already know exactly how to use the latest version. Setup and pairing have been improved through the several iterations of the Chromecast companion app, but playing video sources is identical.

In the past, the stumbling block has been trying to play videos from an app that doesn’t have Chromecast support – like anything from Amazon. Luckily, application support has been increasing, and there aren’t many big titles that don’t work with Chromecast these days (Amazon notwithstanding). A somewhat recent addition is the ability to search for content and Chromecast-enabled apps from within the Chromecast companion app on your phone or tablet.

Another frustration with the first generation product was the lack of 5GHz support, which sometimes led to less than optimal playback. The response from Google was the release of an Ethernet adapter that enabled plugging in to a wire rather than relying on the fairly crowded 2.4GHz spectrum. The new Chromecast has a larger antenna, brings support for the 5GHz spectrum, and adds support for 802.11ac. In non-technical terms this means the wireless signal is better and faster than it was in the previous version. 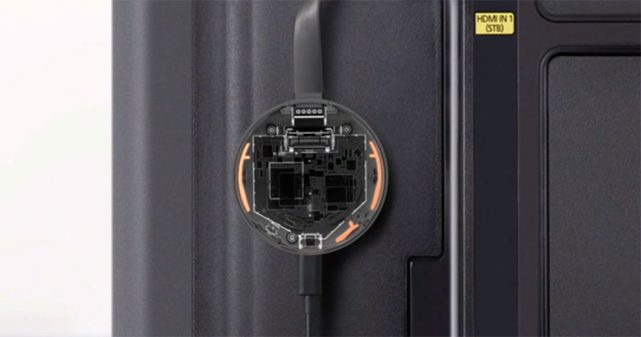 Network speed is one thing, but performance is also dependent upon the inner workings of the device itself. Google increased the speed of the processor inside the new Chromecast, too. Together, both have made the new Chromecast noticeably faster and smoother in every day operation. Videos that used to be grainy on the original version are now sharp and clear. Videos start and stop faster, and connectivity issues are a thing of the past.

The big question here is whether you should drop the US$35 on this new version. If you haven’t yet invested in a streaming media stick, Chromecast is the way to go. It’s inexpensive, compatible with any TV with an HDMI port, works with Android, iOS, Chrome OS, and even the Chrome web browser.

The next question is whether or not you should upgrade to the new Chromecast if you already have the old one. In my case, the answer to that is an overwhelming “YES!” When spectrum congestion at my home was high, videos were grainy, and almost “snowy”. It’s something I just accepted as part of the experience. The new Chromecast, in the same location, connected to the same TV, and powered by the same network have been remarkably high-definition – making the new Chromecast well worth the upgrade cost. 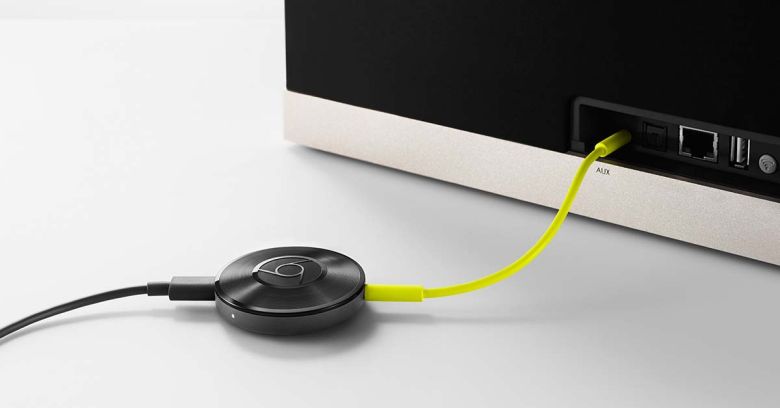 One thing my family has gotten into the habit of doing on the weekends is casting their music to our Chromecast. While that’s worked just fine, playing back music through a big-screen TV always seemed like a waste of electricity to me. This year Google released its first audio streaming “stick” (I guess they’re more like “pucks” now), and called it Chromecast Audio.

Chromecast Audio is designed to plug into your speaker system, and works the same way that video casting works with Chromecast on your TV. The difference, of course, is the lack of an HDMI port and the addition of a 3.5mm speaker port on Chromecast Audio. You can also plug in via RCA cables (with a 3.5mm-to-RCA cable) or even via an optical input (with a Mini-TOSLINK-to-TOSLINK cable). The latter two cables aren’t included, and don’t seem to be available from Google directly.

The question on most people’s minds is “why?” Bluetooth speakers are gaining in popularity, and Bluetooth dongles exist to connect phones to current speaker systems, so why would someone consider Chromecast Audio instead of Bluetooth? It’s a great question – with an even better answer.

Bluetooth is a wireless standard that works to connect two devices to each other to exchange various types of data, audio being one of them. Bluetooth operates in the 2.4GHz spectrum alongside WiFi and other unlicensed devices. That spectrum is getting pretty full these days. The more worrisome part is how Bluetooth audio streaming actually works. Let’s say you’ve got your music collection stored on your phone and want to hear it from your fancy-schamncy Bluetooth  speakers. You’ve got to pair your phone to the speakers, then play the music on your phone, send it over the air through the Bluetooth conduit, where the speakers pick it up and play it. Your phone has to continually access the songs from your device, process and translate the files into audio, and send them through a modem and radio stack to the speakers. That’s a lot of overhead. Next, consider that most people stream their music from Pandora, Spotify, Rdio, Google Play Music, or some other service. This means your phone has to not only do everything mentioned above, it’s also got to have an Internet connection open, pulling data down all the time you’re listening to your tunes. 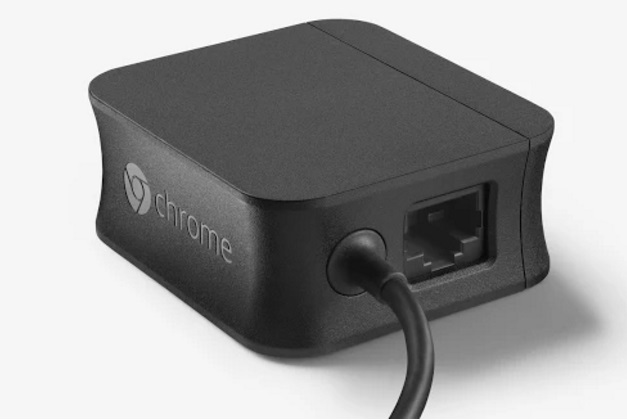 What if you could do all that without any of the negative overhead? You can, and that’s what Chromecast Audio is.

Instead of using your phone as the streaming device, the Chromecast Audio puck is. It’s hooked up to your speakers, a power cable, and your WiFi. What’s more, just like Chromecast for your TV, Chromecast Audio can work on 2.4GHz or 5GHz networks, and works with all WiFi standards, including the super-fast 802.11ac.

Right there, that means that your don’t have to waste the limited power in your phone’s battery to stream over its connection, instead the streaming is offloaded to your WiFi network. Just like Chromecast on your TV, you simply tell Chromecast Audio what you want it to play (a song, a playlist, a podcast, or channel) and it takes care of the rest. Your phone doesn’t have to be powered on, and once the stream has started, your phone doesn’t even have to be present. Also, if you’d rather not use WiFi, Google offers an Ethernet adapter that will let you plug your Chromecast Audio into an Ethernet cable – trying doing that with your Bluetooth speaker!

What’s missing? Overall, Chromecast Audio performs exactly like you’d expect it to. The downside is that, unlike Chromecast for your TV which can cast audio (not just video), Chromecast Audio can only cast audio – it cannot cast the audio stream from a video. This is disappointing, especially considering the vast collection of music available through YouTube. Videos should be able to display the video content on your phone’s screen, but cast the audio part to Chromecast Audio – but it doesn’t. What’s more, the Amazon rift is here, too: you can’t play your Audible books over your speakers through Chromecast Audio. Lastly, if you’re somewhere without an Internet connection, Chromecast Audio isn’t going to be the best choice. In those situations you’d be better served by a Bluetooth speaker.

All things considered, Chromecast Audio is well worth the US$35 Google is asking for it, and finally brings the ease and simplicity of Chromecast to your music collection and music subscriptions.