According to UK-based research and analysis firm Canalys, the “Middle Kingdom” was responsible for 119 million unit shipments during Q3 2017, a 5 percent lower score than the year before, but still almost three times as much as India’s latest quarterly tally.

The battle for first place in the regional vendor chart was once again incredibly close and heated, but ultimately, Huawei stayed on top, while OPPO and Vivo clung on to their silver and bronze medals respectively. 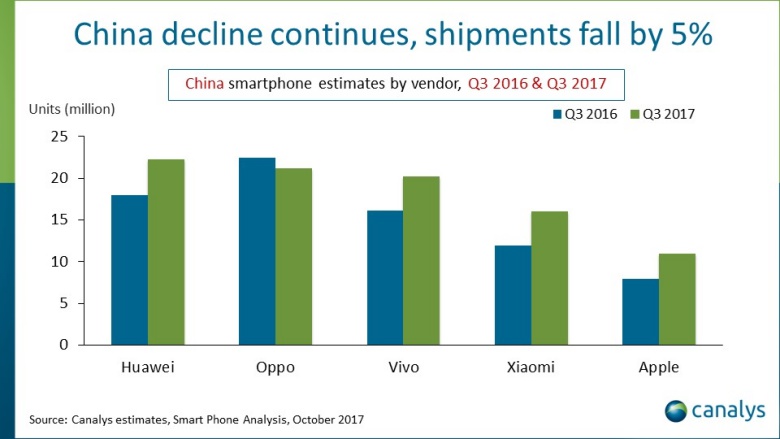 Compared to 2016’s third quarter, Huawei and Vivo boosted their sales numbers by 23 and 26 percent respectively, grabbing 19 and 17 percent market shares. OPPO was just a million units behind Huawei and a mil ahead of Vivo, snatching a solid 18 percent slice of the pie despite technically registering a shipment drop from Q3 2016.

In fourth place, Xiaomi pretty much repeated its Q2 2017 result, which was up 60 percent from Q2 2016, looking at “breaking” the top three’s “dominance” next quarter, “making it an even tighter battle to the top.” 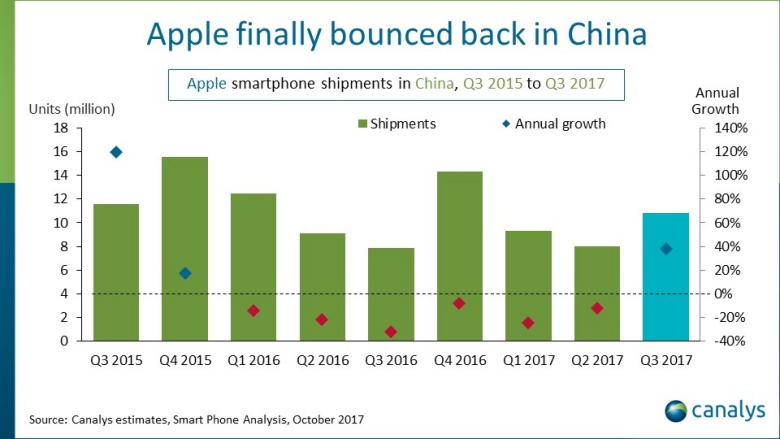 Believe it or not, the fifth best smartphone seller in China is highlighted as the nation’s standout performer, rising 40 percent from 8 million units in Q3 2016 to around 11 mil. Apple had been on a downfall for the previous six consecutive quarters, and even though this growth is deemed “temporary”, it’s still good news for Cupertino.

Who knows, maybe the iPhone 8 can maintain early local popularity longer than analysts currently expect, and perhaps iPhone X supply will swiftly catch up with demand as well. Both scenarios seem highly unlikely, but Apple has to crack the world’s largest market sooner or later, right?