OPPO is the new overall leader of smartphone sales in the all-important market of China, at least for the month of June, followed by Huawei in second.

If you’re still wondering how it might be possible for an Android handheld manufacturer to realistically predict 100 million unit global shipments without much of a presence in many key European markets or the US, Counterpoint Research should give you a solid clue.

According to the firm’s latest “Monthly Market Pulse”, OPPO claimed a big domestic win for the month of June not only in offline sales, but overall China demand, including both physical stores and online smartphone orders.

This is the fast-rising OEM’s first ever victory of such a magnitude, although Huawei nonetheless managed to retain the crown for the year’s June-ending second quarter. 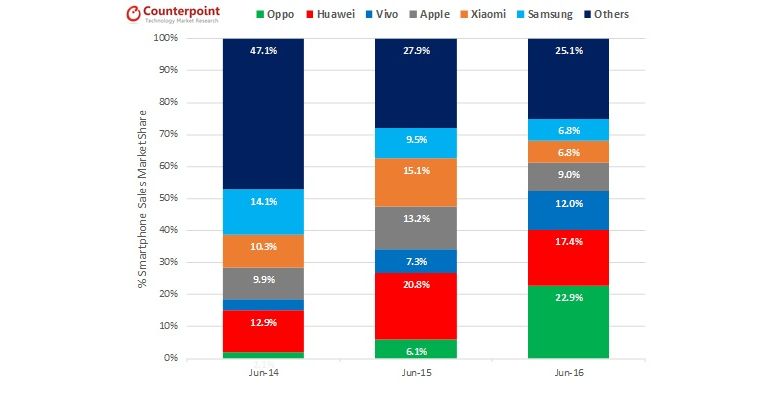 Focusing strictly on the recent OPPO-dominated 30-day timeframe, Huawei followed in second place, more than 5 percentage points away from the new king’s 22.9 percent share, while the other BBK-owned brand, Vivo, took home the bronze medal, beating Apple, Xiaomi and Samsung.

Unsurprisingly, iPhone 6s and SE popularity in the world’s largest mobile hardware market continues to be described as weaker than the demand of the 6 series last year. Still, Cupertino made the top ten model list in June with the 6s, 6s Plus and SE, ranked second, fourth and sixth respectively. The number one? The OPPO R9, of course. Number three? Perhaps unexpectedly, the LeTV Le 2.

Market observers cited by the report predict that HUAWEI will sell 5-6 million units less in Europe for the March-June period.

There is no word on international availability yet.

The new LG V60 ThinQ will soon be available, and here we give you information on where to get it, how much it will cost and more
YouTube 1.8M
Facebook 572K
Twitter 196K
Instagram 134K
RSS