Apple was one of China’s top performers in overall 2017 smartphone sales volume, with the iPhone 7 Plus ranked second and iPhone 7 fifth on the best-selling model list.
Published 15 January 2018, 09:50 EST

Even though it ultimately managed to fend off Huawei in global smartphone sales volume, as well as retain its dominant slice of the mobile industry profits pie, there’s no denying 2017 was a tough year for Apple.

Preparing for the highly anticipated iPhone X launch was challenging, to say the least, and despite rampant initial demand, analysts aren’t exactly calling the “all-screen” handset a smash hit.

Meanwhile, interest in the iterative iPhone 8 duo seemed relatively low from the get-go, which helped the aging iPhone 7 secure first place on the worldwide best-selling list of Q3 2017, ahead of the even older 6s.

Then the performance throttling scandal erupted, and Apple is still scrambling to recover from a public image standpoint. It’s hard to predict exactly how this huge controversy will impact sales going forward, but the Cupertino-based tech giant can find a little comfort knowing its overall 2017 numbers bounced back in the paramount Chinese market. 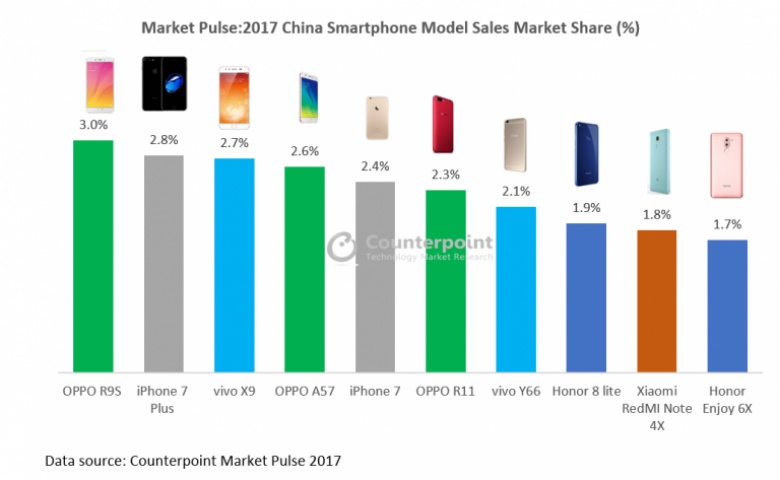 Dominated by local players OPPO, Vivo, Huawei and Xiaomi, the nation’s top ten list of hot-selling smartphones last year only included two models from abroad – the iPhone 7 Plus in second place, and the “regular” iPhone 7 in fifth. That’s it. No Galaxies, no LGs, no Motorolas or HTCs.

The upper mid-range OPPO R9s prevailed with a full 3 percent of China’s total sales during 2017, while the Vivo X9 took the bronze medal, narrowly ahead of the OPPO A57. The OPPO R11 managed to finish sixth, despite barely seeing daylight in June, with the Vivo Y66, Honor 8 Lite, Xiaomi Redmi Note 4X and Honor Enjoy 6X wrapping up a lineup of largely budget-focused low to mid-end affairs.

That’s aside from the iPhone 7 and 7 Plus, of course, although even those two greatly benefited from price cuts implemented in the year’s second half.