In China, Huawei took a massive lead. OPPO and vivo follow on from there. Xiaomi looksl ike it is struggling at home. Apple has taking a big hit.
Published 28 January 2019, 15:30 EST

The Chinese economy has taken a downward turn in the past several months and one way it is showing is in smartphone sales.

Canalys has compiled sales data from the country in the past year and is estimating 396 million unit shipments for 2018 — 14 percent drop from 2017.

As per usual in these reports, domestic players top the bill in market share, though there is a noted migration away from boutique, smaller brands towards well-established companies — companies categorized as “other” saw a 60 percent decline in shipments.

Huawei has seen its best performance yet with 27 percent, up 7 points over a year and 16 percent in raw growth. Analysts put that positivity on its recent push in the premium market — its camera-forward P and Mate series of phones have grown significantly in the past few years. 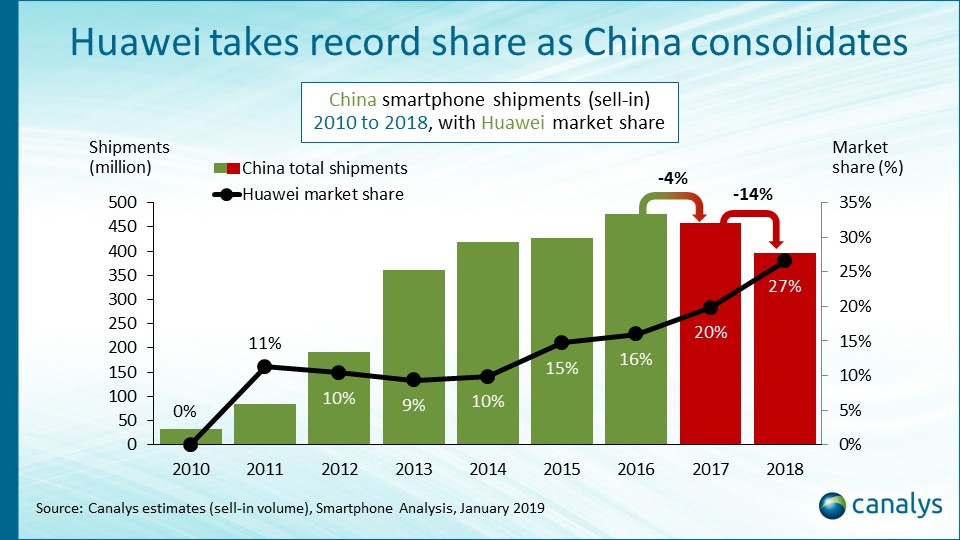 Out of the top five, vivo was the only other manufacturer to grow unit shipments, in this case by 9 percent. In share terms, it has ticked up 4 points to 20 percent, landing marginally behind second-place sister company OPPO. vivo’s rise, in fact, is somewhat surprising given that its reliance on its Chinese audience is the highest out of the top five.

Xiaomi was fourth with 12 percent share, but a 6 percent loss in shipments. It hopes to further capitalize on its international expansion of its trunk brand while working its budget-minded spinoff Redmi back at home to make it competitive with the likes of Huawei’s own Honor.

Out of the major league players, Apple took the brunt of the losses with a 13 percent drop in moves, though its market share holds steady at 9 percent. It is in fifth position.

Canalys Shanghai-based researcher Mo Jia doesn’t give a particular reason why the premium stature of iPhones has failed to attract buyers, but says this:

Apple has several challenges in China, an the growing power of competitors is not actually its biggest. As its services division becomes more important in China, it is vital for Apple to maintain or grow its installed based of iOS users. Apple must re-examine its China strategy, and find a way to revive its high-end brand image, in order to align with the purchasing behavior of local middle-class and upper-class demographics.

Some of Apple’s perceived challenges seen from various points of view include anti-Western sentiment amidst a complicated US-China relationship and a lack of innovation in its products.