CES 2014: our coverage from start to finish

Come with us for a CES 2014 retrospective, as we revisit all the stories that made this year’s expo the even it was.

For all the months we spend looking forward to the CES, thinking about which devices we might see, and planning whose booth we’re going to hit first, it sure can go by in a flash. Sure, it doesn’t seem like it when you’re in the thick of things, but looking back on it now, just a week later, it’s already starting to seem like a distant memory.

Part of that has to be due to just how close we are to MWC, and how quickly we have to transition back into that building-up role as we field the mountains of new rumors for what we’ll see there, but before we put CES 2014 to bed, we’re bringing you a series of posts about our experiences. As you check out some of our bloopers (despite our oh-so-professional demeanor), or hear some more in-depth thoughts from our on-the-ground team now that they’ve had a chance to catch their breath and share some of their experiences, you may want to take a broader look back at everything CES 2014 brought us. 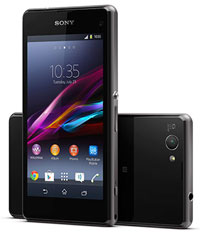 One of the first stories to come out of CES actually predated the event by about a week, with ASUS teasing some of the hardware it would be launching. It sure looked like the company would be coming out with 4, 5, and 6-inch Androids, and that’s just what it ultimately delivered, in the form of its ZenFone 4, 5, and 6. While none of them are really outstanding handsets, they are notable for their use of Intel SoCs. We also saw the company announce the PadFone X for AT&T, offering a five-inch handset with nine-inch tablet dock. The biggest news there is arguably the support for VoLTE and LTE Advance. ASUS also had some tablet news, but we’ll get to that in just a moment.

Lenovo was back with its Vibe Z, having announced the phone a couple months prior, but also brought some new models: the S930, A859, and S650. Those three don’t sound very high-end, but at least a couple of them are sporting HD screens, and Lenovo is sure getting the prices right, with all selling in the $200s and low $300s. 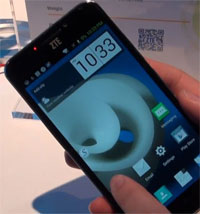 Then there was ZTE, which for being a company that doesn’t get much respect in the States, still came prepared to lay out a nice spread. We saw five such handsets – the Grand S II, Nubia 5S and 5S mini, Sonata 4G, and the 5.7-inch Iconic Phablet – and got to get some hands-on time with the 5S, Grand S II, and the Iconic Phablet.

Archos continued to fire some volleys at the budget smartphone market, hoping that one of them would stick. We saw it announce both the 50 Helium 4G and 45 Helium 4G; while the 45 was a little too low-end for our tastes, the five-inch 50 with its 720p display didn’t sound half bad at $250.

Playing a little loose with the word “phone,” Huawei introduced the 6.1-inch Ascend Mate2 4G. A Snapdragon 400 may not win the phone any benchmark competitions, but that tablet-sized 4050mAh battery could easily give the Mate2 some boast-worthy battery life. That also allows the phone to pull a cool trick by which it can be used to charge other devices when you’re out on the go. We gave the phablet the hands-on treatment before seeing how it might compare against the Galaxy Note 3.

Of all the “big names” to bring new smartphones to the CES, Sony easily had one of the best lineups. Not only did we get to see Sony’s plans for bringing the Xperia Z1 to the US as the Z1S for T-Mobile, but we also got an answer to those months and months of rumors about an international Z1 Mini in the form of the Xperia Z1 Compact. Sony was also showing-off smartphone accessories, like that universal car dock that gives your phone a home right in the middle of your dash.

Wrapping-up our CES phone coverage, we saw Hisense make with one of the largest phablets around, its 6.8-inch X1. It’s not going to be for everyone, but if you’ve got hands like an NBA player, Hisense intends to bring the phone to the US in a few months. 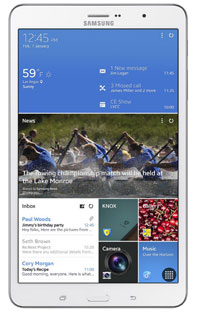 If the CES smartphone lineup left you wanting, the tablets it had to offer really stepped up to steal the show. The biggest news came from Samsung, with four new models to debut. Sure, we didn’t see any sign of a new Nexus 10, but there was plenty of other new stuff to go around with the launch of the Galaxy TabPRO 8.4, 10.1, and the 12.2; we were expecting to see a 12.2-inch Galaxy Note (which we also got), but the additional TabPRO model was a surprise. We went hands-on with the TabPROs, gave the NotePRO 12.2 the same up-close-and-personal treatment, and stuck around to do a couple comparisons, putting the new NotePRO 12.2 up against the Note 10.1, and seeing how the TabPRO 8.4 stacked up to the iPad mini and Nexus 7.

Archos attempted to tackle the home automation problem with its Connected Home project, with the seven-inch Smart Home Tablet at its heart. The tablet itself didn’t look too impressive, but at least Archos is trying to stay ahead of the curve with its focus on connected devices.

We saw some new Windows 8 gear from Lenovo in the form of the ThinkPad 8, offering a 1080p display (8-inch, of course), Intel Bay Trail processor, and options for up to 128GB of storage. 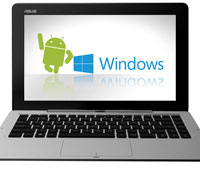 Rather than choosing Android or Windows 8, ASUS elected to go with both, introducing its dual-platform Transformer Book Duet. The tablet is a big one, with a 13.3-inch 1080p screen, and running a powerful Intel Core i7 chip. A keyboard dock gives it the full notebook treatment, including the addition of some very much adequate storage in the form of a 1TB drive.

The intersection between mobile devices like smartphones and tablets with automobiles was a major theme of this year’s CES, and beyond hearing about the Open Automotive Alliance, we learned that Audi‘s been working on a tablet of its own for its vehicles, the semi-ruggedized Mobile Audi Smart Display. 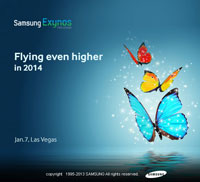 We had high expectations going in to CES 2014 about what we might learn about next-gen silicon in our phones, and while we got some answers, we were also left hoping for more. Like with Samsung – the company’s teasers sure seemed to hint at big CES news, but we didn’t end up getting anything of the sort.

NVIDIA, on the other hand, came ready to party, and shared news of its new K1 chips, to be available in both 32-bit and 64-bit configurations. Both K1s offer a 192-core GPU, and NVIDIA is hoping to see the chips used for mobile gaming solutions.

We also got a little update from Qualcomm, hearing about chips like the 602a for automotive uses or the 802 for high-end TVs, and seeing more from the already-announced Snapdragon 805.

Unsurprisingly, we got to check out a good number of wearable gadgets on the CES floor. LG may not have had any new phones or tablets to debut, but it did introduce its Lifeband Touch fitness tracker, which we managed to try out for ourselves. 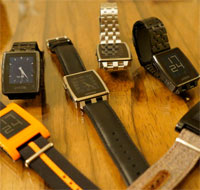 While we didn’t get to spend much time with some wearables, like the new smartwatch from Archos, others were much more capable of grabbing out interest, and chief among those has to be Pebble with its Pebble Steel. After teasing its announcement, the company introduced Steel as a thinner, (slightly) more capable, and just better-looking version of last year’s smartwatch. The big Pebble fans that we are, some hands-on treatment was required, and we looked not just at the new watch itself, but at some of the new apps.

Not everything we saw fit into nice, neat categories like all that gear we just mentioned. For instance, we finally got a direct sequel to the old Galaxy Camera as Samsung introduced its new Galaxy Camera 2 – an Android-based camera solution that’s a whole lot more affordable that last year’s Galaxy NX.

And then there was ZTE, which in addition to its phones and phablets, had a neat little pico projector to launch, the Projector Hotspot. In case you’re having trouble reading the writing on the wall, beyond the projector abilities, it doubles as an LTE/WiFi bridge.

Even the carriers were getting in on the CES action, and following AT&T‘s early announcement of a plan to help attract new subscribers by paying-off their ETFs from their existing carriers, T-Mobile followed suit with a very similar plan of its own, as it rolled-out the latest of its Uncarrier announcements.

Besides just bringing you the straight news on all these goings-on, we brought you quite a few editorials about our experiences with CES and our takes on what was being announced. For instance, before things really got underway I put together a breakdown of the rumors we had heard so far (which makes a nice comparison piece to this, seeing what we did and didn’t get).

Taylor similarly got amped-up for CES by thinking about the sort of announcements that might be made, and later took you for a look inside his bag to show how smartphone professionals travel to events like this. Post-CES, he got to sing his praises for the great showing Pebble put on, and recounted what a FitBit Flex was able to tell him about his time walking around the show.

Joe, like so many of us, is in love with the Pebble Steel, and shared his thoughts on why it makes such a great smartwatch.

Michael headed-up our special CES edition of the Pocketnow Weekly, reconnecting with Taylor (with help from Jaime) to talk about their experiences in Las Vegas. Later, he reflected on some of that surprisingly nice ZTE hardware the company was exhibiting.

We also had a few more CES videos to share with you, like our CES recap, and the oh-so-popular blooper reel footage.

That’s all she wrote for CES 2014! We may have a few new thoughts in the days to come, but we’re moving on, and there’s a lot more 2014 ahead of us – with more phones, tablets, smartwatches, and whatever crazy new unexpected gadgets come out way. Thanks for following all our CES coverage, and stick around so you don’t miss whatever’s coming next!

The new AirPods Pro Light may be coming, but there’s no idea when, and suppliers may be more concerned about how COVID 19 may affect sales