There is a class of people out there for whom a phone does not need to be pretty, or svelte, or dainty. Things like small bezels, brushed aluminum, sleek exteriors give way to other traits like durability and good old fashioned rubberized toughness. This is the class to which the Cat S40 appeals. This is a class of users who work for a living, who are out on the job from dawn until dusk, and who are going to sweat, work, and sweat some more.

These users want a phone that can take a beating and still perform. They want a phone that can fall from a height onto a concrete floor covered with sawdust and survive. If you are one of those users, you guffaw at those dainty little iPhones, and you especially laugh heartily at the curved glass of a Galaxy S6 Edge. You need a workin’ phone. Made by the same company that made your forklift.

If you’re grunting and beating your chest by now, well, stop it, because the other bus passengers are getting nervous. But this phone might just be for you, so read on, and really, try and control yourself. 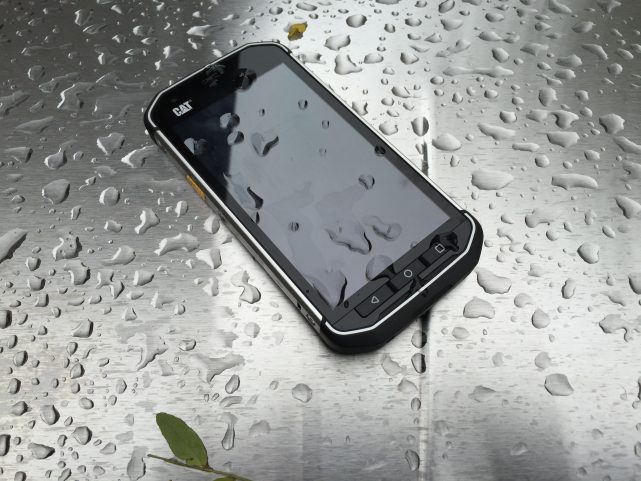 Let’s just throw this out there – a no-nonsense phone is going to look like a no-nonsense phone. The Cat S40 is no exception. “Heavy” and “beefy” are two words that jump to mind when you pick up this phone, but that’s ok, because the next two words are “strong” and “BWAM!” This phone looks bulletproof. We haven’t tested that yet, and are frankly doubtful that it actually is bulletproof, but at the same time, we wouldn’t be surprised if it was.

The outside shell is metal and rubber – like the back of a pickup truck. Ok, maybe a Matchbox pickup truck, but still. Exposed bolts that remind us of rivets are there too just to add to the butt-kicking look of this phone. When you pick this phone up, you don’t know if you should check Facebook, or drive a nail with it. Spoiler alert – it probably does both of those equally well.

Around the edge of the phone, you have those telltale covers that remind you that not all phones have free-flooding ports yet. These covers start at the top over the headphone jack, and continue around the outside for the SIM tray, MicroSD slot, and power/data port. They all have rubber gaskets for a tight fit. On the right side of the phone, you’ll find your power and volume keys. On the left is a programmable button, similar to the Samsung Galaxy S6 Active’s Active Key. On the bottom, in front are the three Android buttons you know and love – back, home, and multi-tasking. The back of the phone is rubberized with the CAT logo and the 8 megapixel camera/flash.

Inside, things get less impressive. This phone carries a Snapdragon 210 quad-core processor, 1GB RAM, 16GB of storage (of which about 10GB is user accessible), and a 3000mAh battery. The most notable of those specs is the battery, which we’ll discuss later. Overall, this is a less than impressive inside to go along with an imposing outside.

The display is a 4.7” IPS panel with good viewing angles, but is a touch on the dim side, and therefore hard to see in direct sunlight. True to its robust upbringing, the display is covered with Gorilla Glass 4. The panel is billed as being responsive to both wet and gloved hands. We can confirm the wet hands functionality, but the gloved hands – not so much. Several pairs of gloves failed to produce even a twitch on the screen, except for our fingerless gloves (we were getting pretty desperate by that point). There are probably pairs of gloves out there that will work with this phone, but we don’t own any of them.

The programmable key on the left side of the phone can do just about anything you want – call a contact, launch an app, wake the phone, you name it. It’s a handy button that we’ve grown to like on the S6 Active. It’s nice to see another phone do the same, but it makes us wonder why only seemingly durable phones are including it. More we say. More! 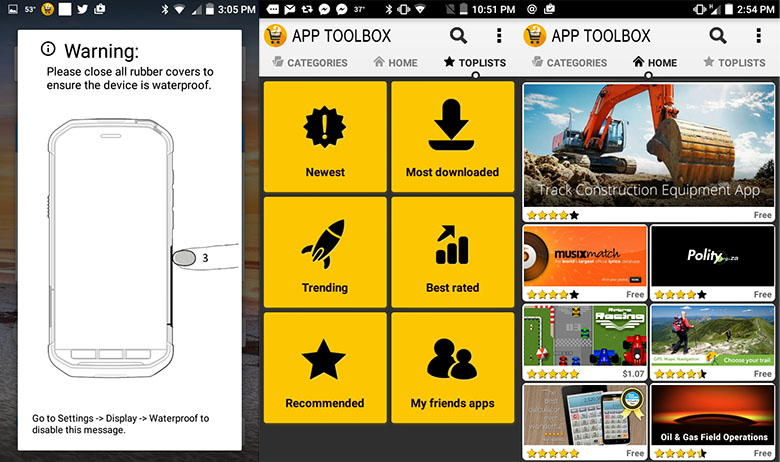 The Cat S40 runs a stock version of Android 5.1. There are a few tweaks here and there, most notably for the programmable button we discussed above. There’s also an animation that pops up whenever one of the watertight covers are opened, alerting you that your phone is no longer waterproof. One interesting feature is the inclusion of a custom app store, called the App Toolbox. As the name implies, Cat has compiled a selection of apps that it thinks the kinds of users who will like the Cat phone will want to use.

This app toolbox has a few funny quirks to it, for example listing The Home Depot app in the Entertainment category. It also has a few notable exceptions such as Geocaching and Ingress apps missing from the Outdoor & Hiking category even though the large battery and durability would seemingly be a natural fit. Not that we’re bitter or anything.

What you will find in the app toolbox is a lot of “get stuff done” kinds of apps, like calculators, unit converters, floor plan creators, travel apps, and of course, health and fitness apps. This app store was designed for people who are really into these phones – blue collar, working folks who are more interested in the wreaking ball, than in the singer on top of it. 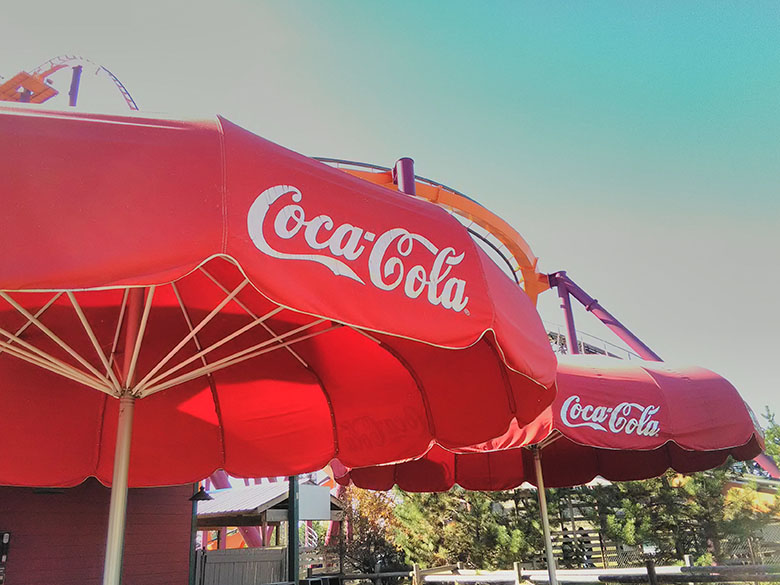 The cameras on this phone also fall into the less-than-impressive category. The 8-megapixel shooter on the back and the 2-megapixel on the front are of the decent and not-so-good variety respectively. The front facing camera is adequate for video calls, and that’s about it. The lighting has to be just right for this to even justify its own existence. Too bright or too dark, and you may as well not even use it. But, if you’re on a job site and you want to contact the foreman and talk about those blueprints, it’ll probably be fine.

On the back, the Cat S40’s camera is also not bad. The rear camera is capable of taking nice shots with a steady, practiced hand, but tends to err on the side of over-exposure. Blown out whites are not uncommon for this camera. Macro shots tend to be on the blurry side. At full resolution, photos are grainy, especially in the dark areas. We’ve said it before, and we’ll say it again, if you’re Instagramming, you’re going to be ok 70% of the time. But if your goal is more serious, then you will want a different camera. To continue with our “heavy worker” profile, this camera will take acceptable shots for things such as documenting damage to a building, or photographing blueprints. Let’s just hope our heavy worker has something else to shoot those “kid at soccer practice” photos with after the job is done. 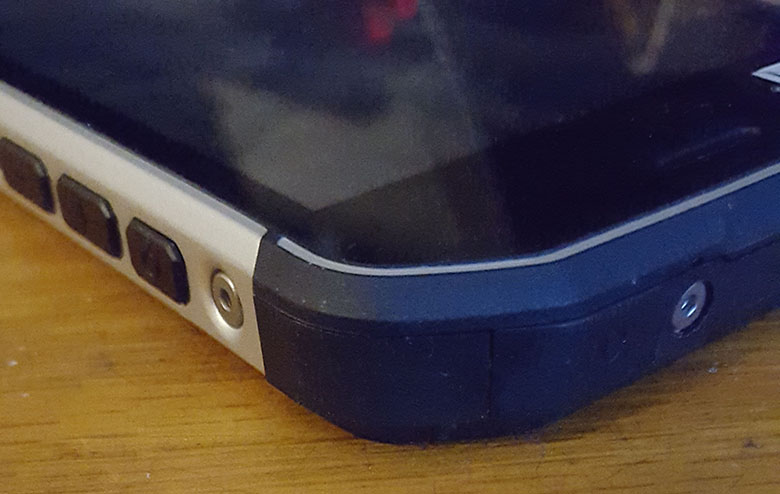 From a durability standpoint, this phone delivers. It is rated with military spec standard 810G protections against extreme temperatures, humidity, thermal shocks, vibrations, and salt mist, and even an imposing mother-in-law. This phone can take a pounding. This phone enjoys swimming with the fishes, freezer rides, and even long, sunny afternoons in the glove compartment. Drops and dust do not phase this bad boy. This phone isn’t built for the construction worker, so much as it’s built for the clumsy construction worker. This is a phone that loves to be outside, experiencing all that it has to offer. 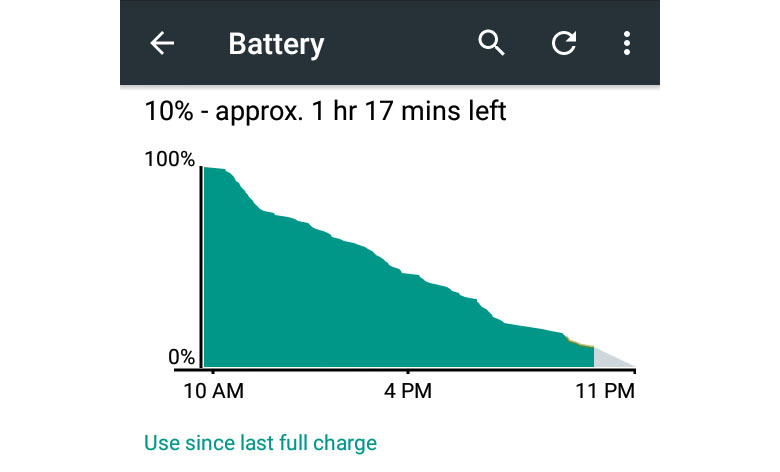 We tested this phone on AT&T’s network for 10 days. Our world-phone cannot get more than HSPA+ data speed, though the US variant will get 4G LTE. Call quality was clear, and the speakerphone was loud, but very, almost ear-piercingly tinny.

As the specifications suggest, this phone is anything but a powerhouse. As much as we can see a steel worker enjoying the durability and longevity of this phone, it’s hard to imagine that same steel worker enjoying the 5-7 second wait it takes for Facebook to load, or the stuttering performance Sparkle will dole out at 400 feet in the air. Yes, the camera can document damage to a building but only if you’re willing to wait three seconds in between shots. FYI: That gets really annoying, really fast.

On the plus side, being underpowered means the phone will last. It has no trouble surviving a full day at an amusement park full of photography and Facebook, laying its head to rest with a reassuring 10% at then end of the day. In the pocket of a nine-to-fiver, it’s fair to say this phone will last a day and a half or even two days on a single charge with light use. There is no quick charge here, so plan to wait about 90 minutes for a full charge. 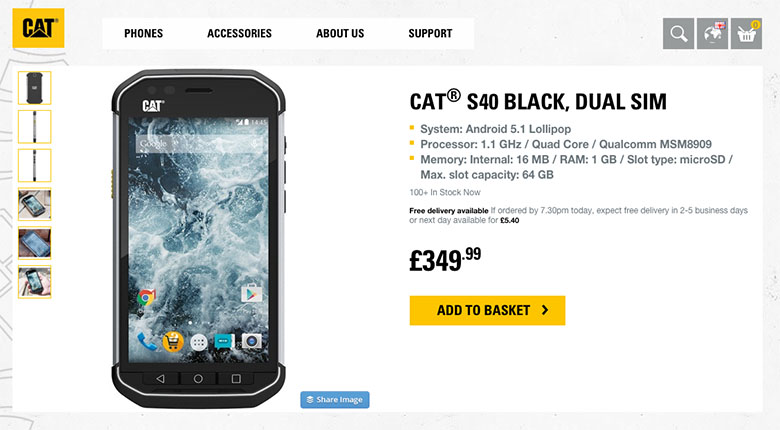 The Cat S40 is available now through catphones.com for £349.99 ($533.86 US) in overseas markets. The Cat S40 will be available in the US through Quality One Wireless, though at the time of publication, it was not yet listed on the site. 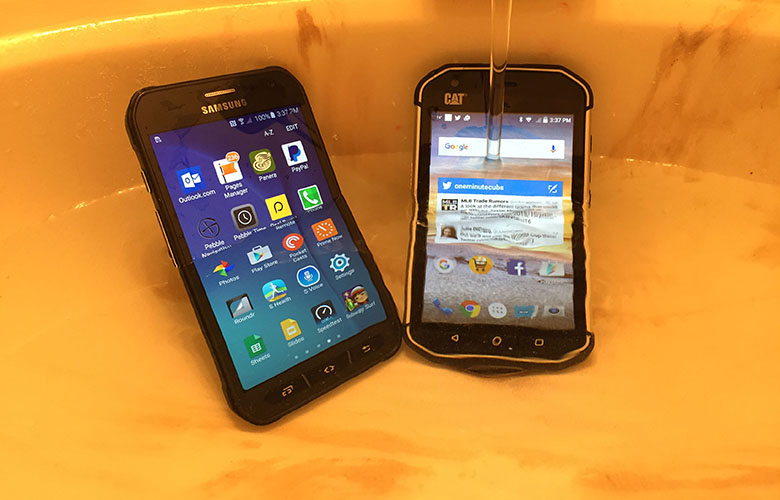 This phone is an absolute tank that can stand up to any torture you care to put it through. The rubberized/metal outer shell laughs in the face of danger. That is all great. But the performance hit from the insides make this phone hard to recommend. Even the price isn’t that great compared to a similarly spec’ed phone and an Otterbox case. A few hundred dollars more and you’ll find a phone in the Galaxy S6 Active that may not be as bulletproof as this phone, but delivers a much better experience than the one you’ll find in Caterpiller’s latest.

As it stands, if you are an outdoorsman or an everyday worker who labors away in the heights of Chicago summers and the depths of Chicago winters, you know how much of a toll that can take on a phone. So this phone may be for you. This is a phone that will not damage easily. Frankly, we just wish the insides of the phone were worth protecting.

Check out the latest deals on the OnePlus 8 series, plus discounts on several Apple Watch Nike variants and more Android phones

The device has been canceled due to a worldwide chip shortage. Hence, the development of Pixel 5a isn’t moving forward.

A lower entry point, aggressive deals, and wider carrier availability proved to the success mantra for Galaxy S21 series in the US.

LG will be updating some of its smartphones to Android 13, which is still two…

The Samsung Galaxy Quantum 2 is tipped to come equipped with a 6.7-inch Super AMOLED…