Can we stop blaming Google for Chat’s lack of end-to-end encryption?

Google’s new Chat app is not even out yet, and already being criticized for its approach and lack of encryption. Read more as to our take of why that is.
Published 25 April 2018, 14:00 EDT

Following the news that Google is working to bring “RCS, or “Rich Communication Services” integration into its Messages texting app, comments started popping up across the web, slamming Google for working on yet another messaging platform, but more specifically, one which doesn’t have end-to-end encryption.

The article posted on The Verge claims that Google is pressing service providers to roll out a new RCS service which will be named Chat. Google has also put the development of Allo on hold so that the team can focus all of its efforts in making its Messages app fully RCS compliant while also adding features like GIF search and Google Assistant. But since the RCS standard is essentially a replacement for the current SMS protocol, Chat will not be encrypted.

Google's RCS will be dead-on-arrival. Designing a new chat platform in 2018 without end-to-end #encryption is a non-starter. Users demand the strength of @signalapp and the simplicity/features of @telegram – not 'innovation from carriers' that will tap and monetize.

Many are comparing Chat to iMessage since it will have many of the same features. That being said, Chat will be much different. RCS is a communications standard which has support from 47 service providers and 11 OEMs. With Chat, Android and Windows users will be able to send messages to friends, family members and co-workers with their default messaging app without needing to install a third-party app like Allo, Signal or WhatsApp. That will give users the ability to sending uncompressed photos, videos and other file formats without the sender or recipient both needing to use a specific app.

RCS Chat from @Google – sounds great, but I won't use it without end to end encryption. Sticking with @signalapp & @WhatsApp . https://t.co/fTXoL5tmmt via @backlon

While I understand that some people have a legitimate need to send or receive end-to-end encrypted messages, I don’t believe that Google’s support for the Chat platform should be demonized. RCS isn’t a Google standard, it’s one that the GSMA dreamed up back in 2007. Google is simply stepping forward in the final phase of implementation to ensure that service providers and device manufacturers are aligned and delivering a service to consumers that is actually worth using.

End-to-end encryption is still a possibility

One thing that The Verge article seems to get wrong is that it’s “unlikely that third-party developers will be able to create full RCS-enabled apps.” RCS is not an open protocol, but there are specific APIs that developers can use to create their own apps to send and receive messages. Since we have third-party SMS apps like Textra, Chomp SMS, and Handcent,  we could easily get a new generation of RCS-compliant apps which give users unique features just like Google will be going with Messages. And there’s no reason why end-to-end encryption couldn’t be one of those features. 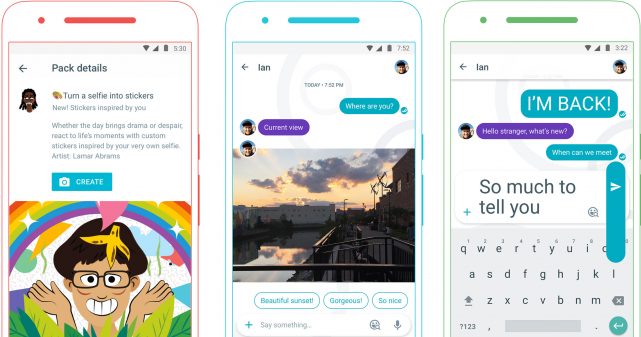 Think of it this way: Allo, could be updated to be RCS-compliant. If that’s done, an Allo user could send a message to someone who is also using Allo which would be delivered directly to the recipient over Google’s servers, allowing it to be encrypted end-to-end. But if the recipient doesn’t use Allo, the message would be routed like any other RCS message, from the phone, through the service providers and ultimately to the recipient’s phone and read through the recipient’s Chat app of choice. This is essentially how Allo works now since it uses SMS as its fallback system if a message is sent from Allo to a non-Allo user.

For years, Google has struggled to deliver a cohesive strategy for messaging on Android. Hangouts, Allo and Duo currently compete for the same users while offering completely unique capabilities and features. By updating Messages and working with service providers and OEMs for a smooth rollout of Chat, Google will finally have an iMessage competitor for it’s Android platform — something we’ve all been craving for a very long time.

What’s your take on Chat and RCS? Do you think a lack of end-to-end encryption will be the demise of this new messaging protocol?