When the iPhone 6s was announced with an upgraded 12 megapixel camera, I immediately wondered how that would compare to the 12 megapixel phone camera on the Nokia N8 that I was using many years ago. The reviews for the iPhone 6s’s new camera have been pretty good and some are saying it’s the best camera on a smartphone ever. In this comparison, we’re going to look at how it compares to a few old Nokia phones; the Nokia N8 from 2010, the Nokia Lumia 1020 from 2013, and the Nokia-derived Microsoft Lumia 640 XL which actually was released early this year but is notably a budget smartphone at around $225. Now, before we start, we’re just looking at still image quality here. Some others have taken into account things like focus speed, launch speed, video recording capabilities, etc.

Take a look below at a series of 100% crops of the same scenes taken with each phone. You may see some differences in camera angle due to the focal length differences in the lenses, or the resolution differences of the sensors, but you should be able to see a good comparison between the image quality of each phone. Also note that we’re using the RAW DNG versions of the Lumia 1020’s image capture to ensure lack of post-processing as the JPGs generated from the Lumia 1020 can be drastically different. 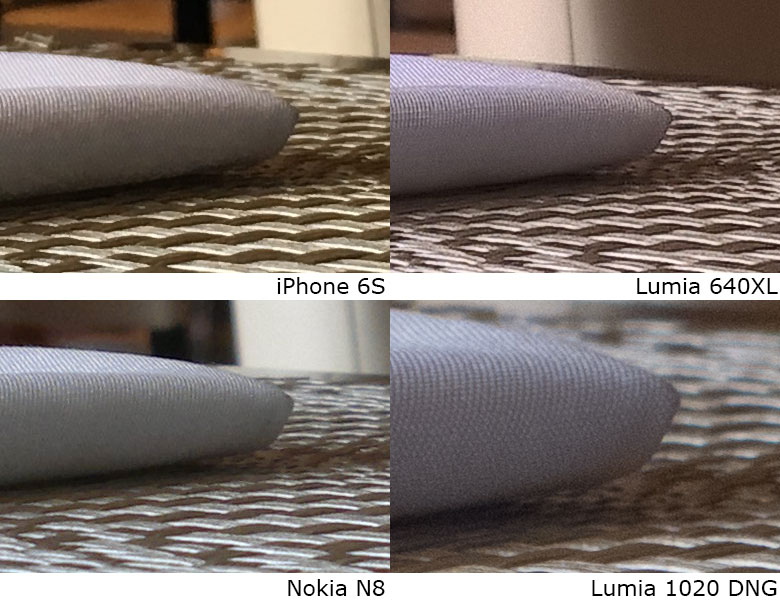 We’ll start with an indoor low-light example. While this restaurant photo is not extremely low-light, it’s dark enough to get some noise to show up. This crop is centered on the focus point in the middle of the frame which is where the image quality should be the best. The color of the napkin corner in the iPhone 6s is clearly warmer than the others and warmer than it should be. This is to be expected from iPhone cameras as most of them do tend to the warmer side. However, the detail in the iPhone 6s’s image is very lacking. There is some resemblance of ta thread texture in the folded napkin, but you see spots where sensor fails. The Lumia 640XL has a similar issue, but to a lesser degree as the threads are more pronounced. The Nokia N8 loses thread detail in the shadow area, but keeps them pretty straight in the mid-tones. The Lumia 1020 is the only camera that can resolve the cross stitching of threads in the folded napkin. 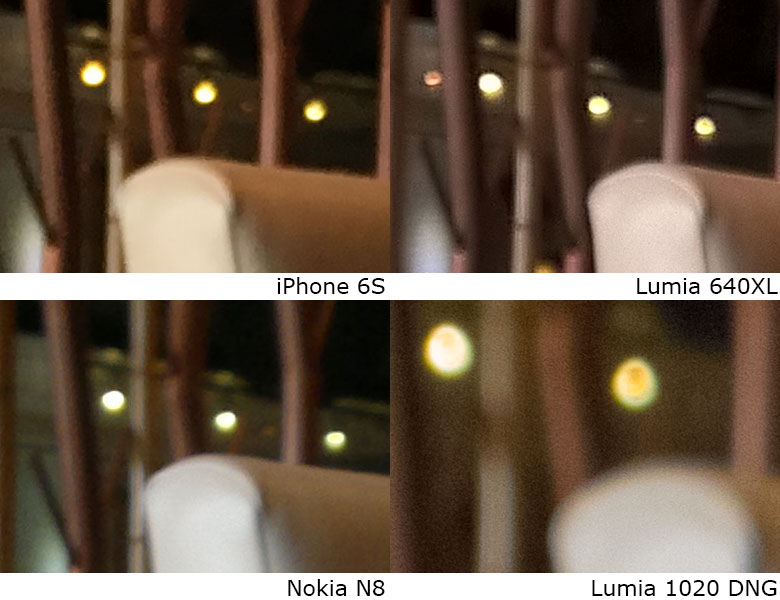 When you look at a different section of the image where the blurry bokeh is, we get a better idea of the structure of the noise as well as the smoothness of the bokeh. While the Lumia 1020 does show a significant amount of noise, it’s more film-like noise that doesn’t interfere with the smoothness of the bokeh nor the detail of the image. The iPhone 6s has huge amounts of splotchy scattered artifacts that make edges look textured or squiggly. The Lumia 640XL also has splotchy noise, but to a slightly lesser degree than the iPhone 6s. The Nokia N8 is a little better at the smoothness of this section of the image, too. Each thumbnail below links to the full resolution versions of these images. 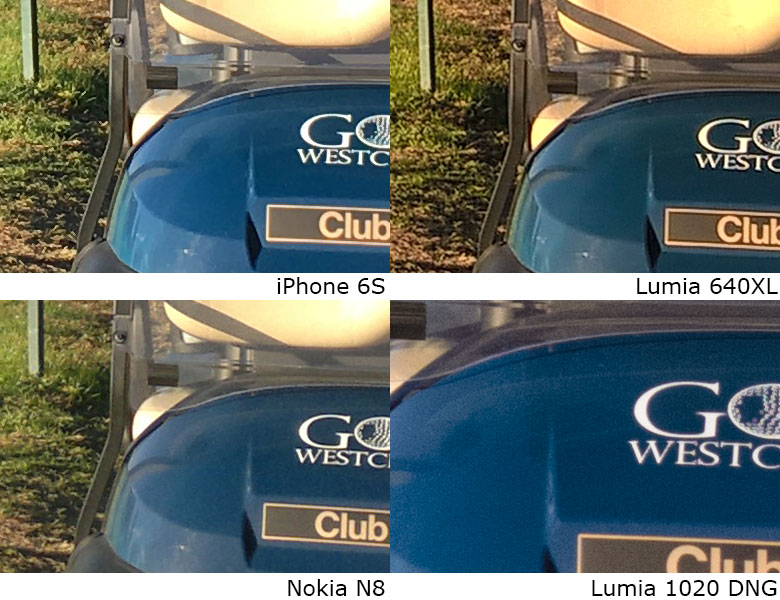 In this example there is plenty of light to give each camera its optimal image quality. Now, the light in this scene is meant to be a bit warm since the sun is getting low, so warmer tones are to be expected. The Lumia 640 XL and iPhone 6S are very close in this example. The Lumia 640XL has a bit extra artificial sharpening along the edges while the iPhone has some splotchy noise that keeps the edges from being as smooth as they should. The Nokia N8 has less contrast, and less artificial sharpening, but smoother detail than the iPhone 6s. The RAW Lumia 1020 image clearly shows much more detail along with the signature film-like noise. Each thumbnail below links to the full resolution versions of these images. 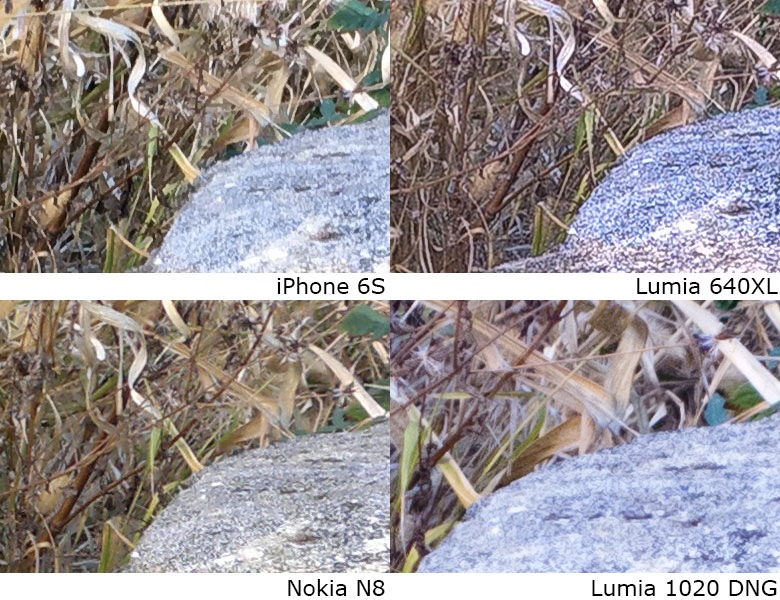 The above sample is another brightly lit scene, but this time with a lot more detail to resolve. You can see right away that the Lumia 640XL puts a lot of speckling and over sharpening on the rock texture. The iPhone 6s and Nokia N8 are really close in terms of the amount of detail they resolve, though detailed lines and edges are a bit smoother with the Nokia N8. At 100% of full resolution, the Lumia 1020 looks a bit soft, but due to the massive advantage in pixel count, there’s clearly more detail there. Click each thumbnail below to see the full resolution versions of these images.

While the iPhone 6s and its new 12 megapixel sensor is certainly an improvement over the classic 8 megapixel sensor that iPhone users have been stuck with for years, the image quality still suffers from flakey, scattered noise that kills a lot of the detail. The budget-friendly Nokia-derived Lumia 640XL is not too far off from the iPhone 6s and that’s pretty good considering the Lumia 640XL costs about $200 vs. the iPhone 6s’s $650 price tag. The Nokia N8 from 5 years before the iPhone 6s was released still holds its own and bests the iPhone in a few areas. The Lumia 1020 is still king when it comes to image quality and RAW flexibility as long as you can forgive its slowness in saving ginormous 40Mb image files every time you take a shot. Feel free to download the full resolution samples linked to above and give us your own opinions about the comparison in the comments below.

It seems that the LG Rollable smartphone was closer to launch, as more of its certifications start to surface online