Samsung’s Galaxy Note II was a wildly popular smartphone. With the next-gen on the horizon, take our poll and tell us if you will buy a Galaxy Note 3!
Published 09 September 2013, 17:52 EDT

A few weeks ago, I said I was done with large phones, that it’s a bit of a burden to carry an oversized phone if you’re prone to carrying two phones on a daily basis. In a nutshell, the Xperia Z Ultra and Galaxy Mega 6.3 ruined larger phones for me. They were bigger for the sake of being bigger.

Plain and simple, pocket space in your standard pair of (reasonably stylish) jeans simply doesn’t allow for a 6-inch phone.

Downsizing to the Moto X and Lumia 1020 was, unsurprisingly, quite pleasant. And although I’ve loved the Galaxy Note II for the year or so I’ve been carrying it, it was time to step it back a notch. The additional software didn’t really make a compelling argument for additional screen real estate. Multi-Window is a nice and useful feature, but without root and some hackery, it’s limited to a specific set of apps. And the S Pen would work just as well on slightly smaller display.

I said it, and fully meant it. I was not interested in the Note 3. The Galaxy Note II has been fantastic, but the more phones grow larger, the less useful and practical they become – larger without any more utility.

With rumors suggesting all sorts of potential screen sizes for the Note 3, and a complete lack of faith in Samsung’s ability to develop truly useful features on my part, I lost all interest in the Note 3 before it was ever official.

Inside, I knew there would be some hankerings for the new Note. As much as I adored the first two, it was inevitable. Yet I was tired of hyperglaze, I was tired of TouchWiz fluff, and I was tired of, well … larger phones.

In an unexpected turn of events, however, Samsung blindsided many of us. Gone is the hyperglaze finish. The Note 3 utilizes a love-or-hate faux leather with faux stitching. The S Pen has a more neat and clean appearance. The rear of the device looks more mature. And the Note 3 is finally what the Note series has been about all along, only now in design, as well performance and marketability – executive, business professional, and premium.

Sure, the underpinnings are still the flimsy plastic Samsung has always used. And at it’s core, it’s the same ol’ thing with prettier makeup. But that’s what most of us have been complaining about all along. This is the first Samsung smartphone in recent memory that … looks nice.

The Note 3 is about packing more of everything in roughly the same package – more display, more RAM, more storage, more features, more horsepower. Everything about it is better than its predecessor, yet its physical footprint has hardly changed whatsoever. And that’s something that speaks directly to people who enjoy larger phones.

Samsung has an understanding of what makes large smartphones so appealing. It has continually added to the Note family, piece by piece to make Note not only an internationally known brand, but a symbol for the ultimate mobile utility. And while other manufacturers continue missing the mark, misunderstanding what makes an oversized phone worth the extra baggage, Samsung keeps knocking home runs out of the park. 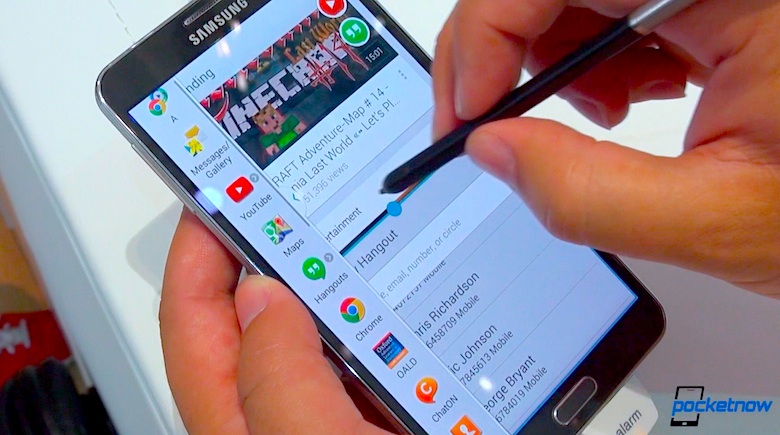 Samsung innovated honest to goodness features this time around, not marketing gimmicks that pack a wow factor on the sales floor and have no practicality in actual usage. It has improved the S Pen integration with Air Command and drag-and-drop text capabilities in Multi-Window mode. And Pen Windows allows you to turn a select few apps into floating windows by drawing a rectangle on the display from within Air Command.

I loved the Note II and never once felt it was too big for normal use. So, theoretically, I shouldn’t have any qualms with the Note 3 either, at least in terms of size. And although I’ve temporarily settled down with a more moderately sized phone for the time being and gotten quite comfortable, the Galaxy Note 3 has most definitely piqued my interests.

Will I buy the Note 3? I haven’t completely decided yet, but odds are, I will. The only two phones that make me hesitant to say yes are the Moto X and rumored Nexus 5. The Note II is one of my all-time favorite phones, and the Note 3, despite what I previously said about larger phones, looks like it might be added to my device Hall of Fame, as well.

But we’re interested in your stance, readers. Will you be picking up the Galaxy Note 3 once it’s available in your area or on your provider? Be sure to take part in our poll below and share your sentiments in the comments section!