Read what look Apple could be going for with the design of its rumored budget-priced iPhone.

OK, so maybe those supposed next-gen iPhone components don’t really help us that much with what to expect from the hardware as a whole. For a more complete sense of the phones, rumors could still be our best options, and now some new ones have arrived to attempt to describe the low-cost iPhone in quite a bit of detail.

The guys at iLounge have heard from their “reliable sources” that this budget iPhone will be largely constructed out of plastic, just like had been rumored before, and will resemble an odd mix of design elements from the iPhone 5, latest iPod touch, and an iPod classic, of all things.

Supposedly, this iPhone would have the general shape of the iPhone 5, but with curves that resemble those on the iPod classic –  a flat back and sides, but curved transitions between them. The port layout on the handset’s bottom edge would apparently closely resemble that of the most recent iPod touch.

iLounge says this budget iPhone will still have a four-inch screen, like current models, and will still be a high-res Retina component. From the sounds of things, the site is quite confident about this information it’s received, and while it doesn’t have any imagery of prototype hardware to share, the level of detail it’s offering suggests ties to someone with access to such a thing. 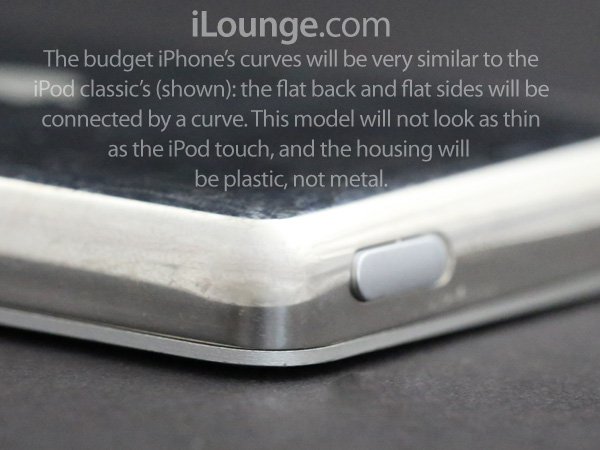