For nearly a year, the BLU Win JR LTE was promised Windows 10 Mobile. It was physically impossible, but it was marketed that way, says a Redditor.
Published 20 March 2016, 20:57 EDT

Microsoft disappointed many Windows Phone 8.1 users by cutting down the roster eligible for an upgrade to Windows 10 Mobile. For BLU Win HD LTE owners, they were in the clear. For those carrying the BLU Win JR LTE, tough cookies. You’d expect it with the minimum requirements for the update package, though: the phone had only 4GB of storage with 512MB RAM.

Yet, BLU and Microsoft slapped the Windows 10 badge on the damn thing anyways. 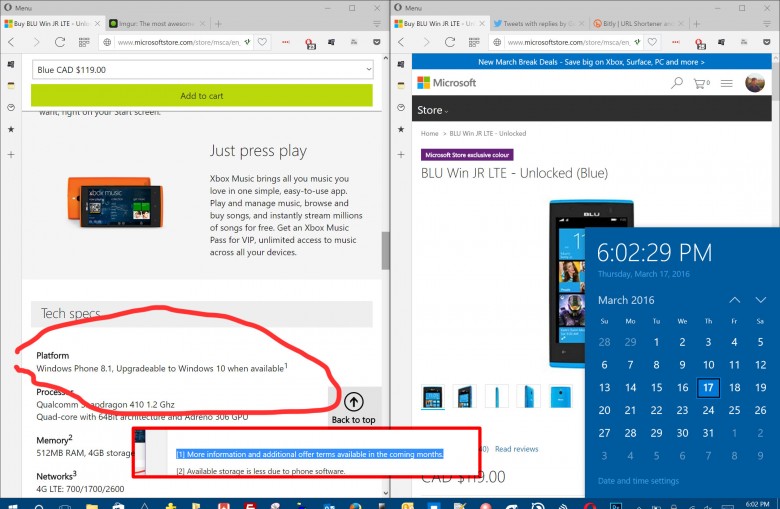 Over the course of a thread, a Redditor thoroughly took apart the marketing for the BLU Win JR LTE. The Microsoft Store promoted the device’s blessing of Windows 10 Mobile for nearly a year — something Microsoft’s own Upgrade Advisor app dashed from the outset. Only after the official devices announcement was made (and, as a point of fact, after the Reddit thread took off) did the broken promise get cleaned off the product page. And not a word from the two companies so far.

Yikes, Microsoft quietly updates BLU Win JR LTE saying no Windows 10 upgrade after saying it would get the bits. pic.twitter.com/Zu44rtTIs7

Why was such a disconnect allowed to happen when it came to the advertising? How was it allowed to fester as a lie? And will there be recompense for or revenge on the part of tricked buyers? We’ll have to wait and see.

Samsung Galaxy S21 Ultra will reportedly be available in three additional custom colors that include a shade of brown, gray and dark blue.