BLU Studio 7.0 may be more tablet than phone, but it sure is affordable

See what kind of sacrifices the BLU Studio 7.0 has to make to keep its price as low as $150.

There’s probably never going to be a hard-line answer to the question “how big is too big to be a smartphone?” Manufacturers will continue to push limits, and as long as these phablets that encroach into tablet-sized spaces continue to attract shoppers, new devices will keep on arriving. The latest to catch our eye is the Studio 7.0 from BLU, a lower-end phablet that tries to get some attention due to its large size and budget price.

How low end? Well, even at seven inches, that display is only 1024 x 600 – an odd resolution to be sure, especially at a size where 720p feels like the bare minimum. The 1.3GHz SoC is a dual-core component, there’s 8GB of storage (at least with microSD expansion available), and we pray to the smartphone gods that the “1MB” of RAM listed on BLU’s product page is a grievous typo (it’s gotta be 1GB, right? We’ve reached out to BLU to confirm). The Studio 7.0 is also unlocked for use on the GSM carrier of your choice, though without LTE support.

So far, there’s not a lot to be excited about – and then we come to the $150 price tag. It’s not so low as to have us throwing our money at BLU, but the combination of a tablet-like phone, the lack of a contract requirement, and presence of cellular connectivity might just make the Studio 7.0 attractive to the right shopper. Well, maybe. 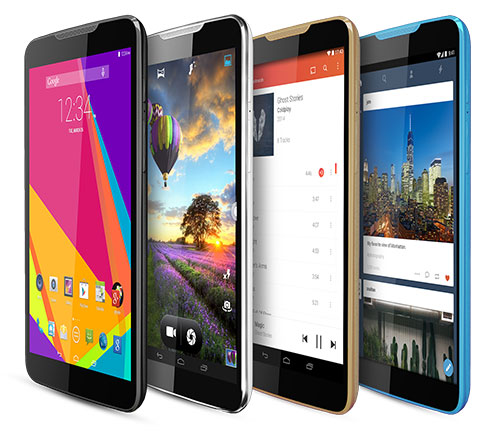