The Blu Pure XR brings a lot of great things to the midrange table, including an Apple-Meets-Samsung feature called the “Edge bar”. Intrigued? C’mon in.
Published 29 August 2016, 11:30 EDT

One of the fiercest competitors in the midrange space has to be Blu. This plucky little OEM out of Miami is chalk full of surf, sun, fun, and decent phones. The latest to hit the sandy shores is the Blu Pure XR. We have been testing this phone in the Chicago area on AT&T’s network for ten days, and here is what we found out. 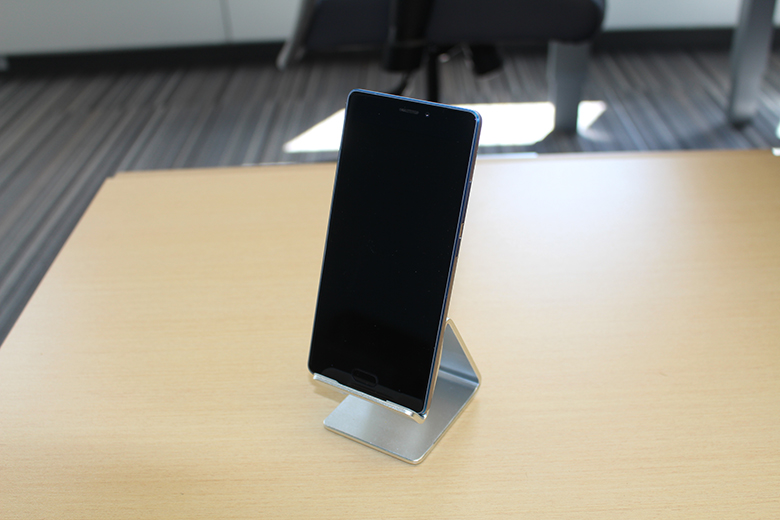 The theme of the Blu Pure XR’s hardware is “Sensitivity”, and not in the “long walks on the beach” kind of way. We’ll get to that aspect in a moment, but first, of course you want the juicy stuff. What’s under the hood? Starting off we have a MediaTek 6755 64-bit 2.0 GHz Octa-core Processor, 4 GB of RAM, and 64 GB on board storage (expandable via MicroSD). All this is kept in an all-aluminum chassis that is just 7mm thick topped by a 5.5” Full HD, Super AMOLED Curved Display at a resolution of 1080 x 1920. Rounding out the insides, we have a 3,000 mAh battery, and a USB Type-C port.

On the outside, Blu has included a fingerprint sensor which is pretty fast and also acts as a home button. Like the ZTE ZMAX Pro we reviewed last week, you can customize the Back and Multitasking buttons, and like that same phone, the buttons themselves are unlabeled in what we are hoping is not becoming an industry trend.

The screen on the Blu Pure XR is good, but not great. On a screen this size, 1080 x 1920 just really doesn’t cut it. But that display is what we need to talk about because this display is pressure sensitive and 3D touch enabled. The concept brought first by Huawei and popularized by Apple is a fun addition to the phone and reminiscent of an Apple-Meets-Samsung concept. 3D touch brings two major things to the table. Like Apple’s implementation, a firm press of a supported icon will bring forward some quick-launch options for that particular app. That can be anything from starting a new note, to searching for a type of file, etc. Also, a firm press of the screen near the edge of the phone can open an “Edge Bar” which is a list of shortcuts to six designated apps, much like the Galaxy Edge series of phones. This works on any screen and can be quite handy.

Of course, just like previous implementations, discoverability is still an issue here. Only certain supported icons will have 3D touch commands available. 3D pressing on a non-supported app does nothing. Maybe Blu, Huawei, and Apple can get together and compare notes regarding this issue. It’s a cool concept to be sure, but it is very underutilized at the moment.

Also, in the sensitivity department are the volume and power buttons. We’re talking hair trigger here people. Very often during our time with the phone, we would accidentally press the power button in the middle of a game, or the volume would increase suddenly and annoyingly while riding in a pocket. And speaking of annoying sound…

The Blu Pure XR has an amazingly loud loudspeaker which is good, but the speaker itself has basically no bass and is all treble, which is bad. Ear piercingly bad. The bottom-firing speaker does get quite a bit of volume – arguably the loudest we’ve heard come from a smartphone, but the sound quality is pretty bad. Fortunately, Blu also ships a pair of ear buds in the box. Plugging those into the headphone jack gives you a better tone – very bassy, but still retaining good high-end tone. If you are going to have this phone make sound, do yourself a favor and have it do so through the headphones. 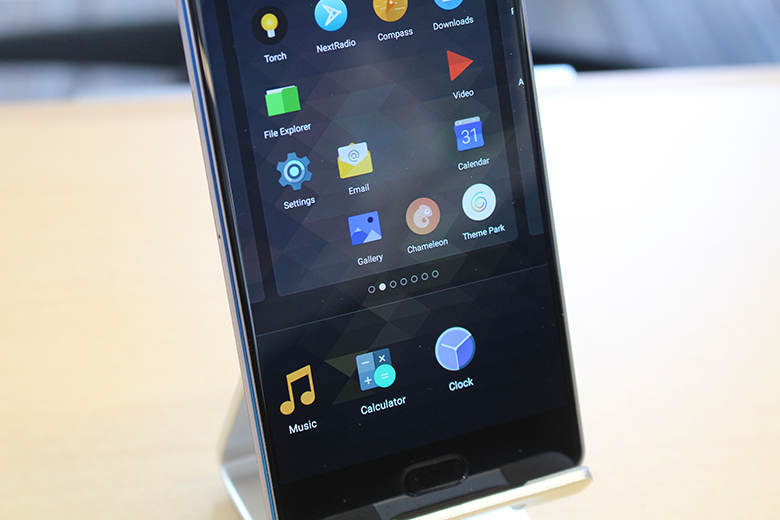 Blu software is like a box of chocolates. You never know what you’re going to get, and the Blu Pure XR is no exception. Blu’s skin is built upon Android 6.0, but you won’t see much that reminds you of that operating system. The notification shade is just for notifications. A swipe up from the bottom of the screen reveals the control center where your toggles for WiFi, Bluetooth, Flashlight, and the like are located. Also located in the control center is the settings button.

Even the settings menu is part of Blu’s skin of Android. There is basically nothing stock left in this build, which is quite different than what we typically see these days. That’s not necessarily a bad thing, and this isn’t a condemnation of this particular phone, but Blu seems to have an identity crisis when it comes to its software. Virtually every Blu phone we have used (and we’ve used quite a few) has had some different build of a skin on it, so our head starts to spin from the time we open the box. It would be our recommendation that Blu find a skin it likes and run with it going forward.

Moving on to the camera, we find ourselves in familiar territory. Every Blu phone we’ve used has had a good by not great camera. The Pure XR is no exception. Outdoors, in great lighting, the camera is fine – actually better than fine. The camera carries accurate color reproduction and fine detail even when photos get zoomed and cropped. Once you leave the great outdoors or go anywhere where the light isn’t as good, there is a noticeable drop in performance. Not only is there a good amount of graininess, but noticeable loss of focus as well.

Tucked away in the settings, you’ll find the modes that we’re used to seeing – but they’re almost hidden away in a modes button in the upper right corner of the camera app. There is no slow motion capture that we could find. Overall, the camera app is not very intuitive almost to the point of being hard to use beyond just normal point and shoot. Like the rest of Blu’s software, once you get used to it, we’re sure it’s fine, but until you do, it’s a bit frustrating.

On the plus side, the 3,000 mAh battery performs pretty well, easily getting through a full day with moderate use. When streaming video on WiFi for 30 minutes, we only see a 5% drop in battery power. Screen on time averages around 3.5 hours so if you’re a nine-to-fiver, this phone will have no problem getting you through the day, even with some streaming.

The Blu Pure XR is available unlocked from Amazon and Best Buy starting August 29 for $299. 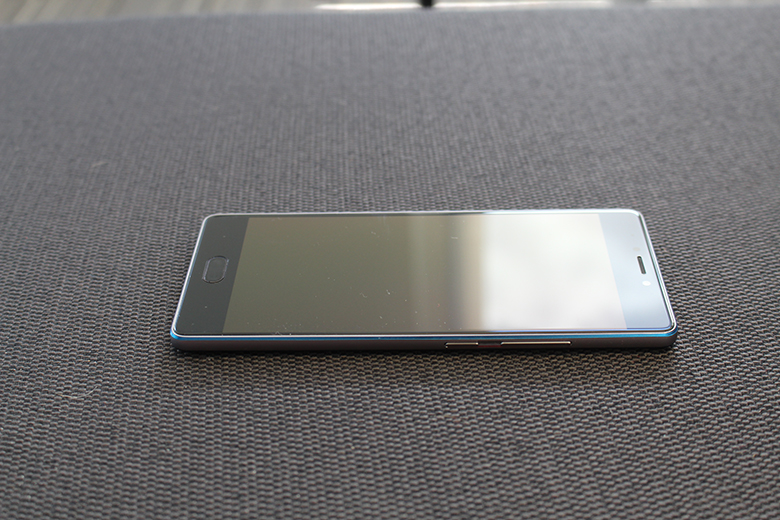 Overall, this is the most powerful Blu phone we have used. We’re not used to seeing this kind of performance from the Miami-based OEM, which is good. The sensitivity of the power button in particular was an annoyance, but one we’re willing to live with. If Blu can get a better camera in future models like this, the Pure XR could give other midrange options a run for their money. But then, a lot of midrange OEMs compromise in the camera, which is unfortunate.

The software and the addition of 3D touch is pretty neat overall. For those willing to overlook the loss of the app drawer and the confusion of not finding settings in the notification shade, the addition of 3D touch is simply delightful – especially the quick launch icons. In the future, we’d like to see expanded capability here – more apps, more pages, or even widgets. Heck, put notifications over there.

Fortunately, these are all software concerns, and easily corrected. The hardware is solid, attractive and powerful. If one is so inclined, software can be altered. Even so, this is a really great phone to be had for under $300, which is hard to argue with. Blu keeps on nailing the price point in its offerings, but it cuts some pretty big corners as well. Whether or not those are the right corners to cut will be up to the individual buyer, but we are pretty pleased this time around.

On today’s Pocketnow Daily, we talk about the possible launch date of the iPhone 12, more Google Pixel 5 leaks, and more.

It seems that the new Samsung Exynos 1000 processor may come with more power, and it may even be faster than its Snapdragon counterpart

Today’s deals come from Amazon and B&H where we find the Google Pixel 4, the Jabra Elite 85h and more devices on sale

Today's deals come from Amazon and B&H where we find the Google Pixel 4, the Jabra…