Story Maker on the BlackBerry Z10 is a fun, exciting, and totally unexpected gift from the smartphone maker. Read on to see how this free app transmutes lame photos and video into awesomesauce.
Published 12 February 2013, 16:01 ESTUpdated 01 April 2021, 14:04 EDT

If you’re looking to edit video on a computer, there’s a vast selection of software out there. From Windows Movie Maker to iMovie all the way up to Final Cut Pro and Adobe Premiere, an endless sea of options awaits those who would cut their movies together on a desktop or a tablet.

But even on the simplest of those setups, editing video represents a fair amount of work. Even iMovie requires you to bring your camera or smartphone to your computer or tablet, sync via a cable or the cloud to transfer the footage, then spend twenty to thirty minutes snipping, cropping, stretching, and zooming until you have an exportable product. That ain’t no fun, jack.

What if there was a piece of software right on your smartphone that not only did local editing and rendering of video, but took most of the leg-work out in the process? One company dared to ask that question.

That company goes by the name of Apple, and its mobile version of iMovie has been available on iOS devices since the launch of the iPhone 4. We even took it for a quick spin back in the day, when iPhones were thicker and our title images -and waistlines- were slimmer. Since then, iMovie for iOS has grown into quite the capable smartphone editing solution.

But Apple’s competitors haven’t been standing still in the face of this very cool product tossed down from Mount Cupertino. The first time I laid eyes on a competing solution was while reviewing the HTC One X for AT&T, which featured an app unimaginatively dubbed Movie Maker. It included a simple user interface, a handful of transition effects, and the most inexplicably unsettling stock music I’ve ever laid ears on:

If you watched that all the way though, you may now take a short recess to play something else -anything else- to flush that haunting sense of vague unease from your head.

Anyway, Movie Maker wasn’t a surprise. This is the kind of stuff that makes sense from HTC or Samsung, companies interested in jazzing up their Android skins to stand out from the pack. But RIM was the last company I’d have expected to start building fun quirks like video editors into its smartphones. Maybe it’s partially for that reason that the company shed its stodgy old brand name a few weeks back, and embraced the fun side of consumer software with a spirit not seen since the original BlackBerry Pearl. To that end, the new BlackBerry Z10 does indeed feature an on-board movie editor, and it goes by the name Story Maker.

As you may have heard, a bit of a blizzard hit the Pocketnow Boston offices recently, so I had ample snowed-in time to discover what made Story Maker tick, and whether it was worth the time of any would-be BlackBerry Z10 buyers.

Perhaps unsurprisingly, the experience of whipping up a quick video in Story Maker is very easy. I should note here that the app’s name, besides being snooze-worthy, is also rather apt: this isn’t just a movie editor, but more akin to something like Power Point – except it’s built for presenting fun life events, not boring office ones. The core of that distinction lies in Story Maker’s friendliness to still photos, which can be thrown in right alongside the video, all willy-nilly like. 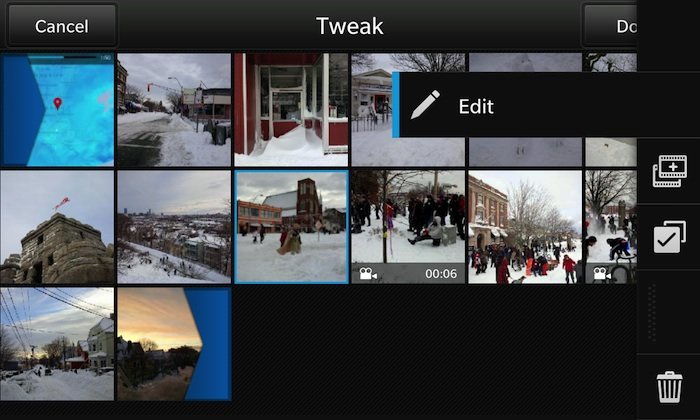 In a credit to the app’s designers, that “throw stuff in there and see what happens” simplification isn’t too far from the actual procedure for making Story Maker work. The real sequence of events is a five-step process that goes like this:

Seriously, that’s it. The app throws your photos, videos, and music into a cyber-blender along with some interesting transitions, and the next thing you know, you’ve got a fairly well-cut MP4 of your nine-hour drive to Canada that looks way more dramatic, exciting, and hair-raising than it actually was. This all happens on-device, too – no need for any help from that holier-than-thou “network” fellow.

It gets a little more involved if you don’t like Story Maker’s initial cut (you prima donna, you), but at least you have options. The app lets you tweak timing, transitions, crops and filters, and you can reorder, add, or remove clips at any time. You can even adjust brightness, contrast, and orientation of specific clips within the whole project, as well as dictate exactly how long you want it featured in the arrangement.

It’s not without its drawbacks -there are a few bugs here and there, some of which require a device restart to get everything happy again. Also, there are little quirks and seemingly arbitrary limitations -like the 17-character limit on titles- that render this app less than perfect.

But come on: this is a well-featured video editor for a smartphone, offered in stock configuration right out of the box. A few bugs and limitations are a more than reasonable price to pay for the functionality you get in return, not to mention how much more epic it makes your day-to-day life look. Agreed?

Good. Now put your eyes on this magical post-blizzard slideshow I whipped up in ten minutes on a device smaller than a sandwich, and be thankful to live in such an awesome time:

The latest iPad mini is already on sale over at Amazon.com, where you will also find…