The BlackBerry Passport from an Android Perspective

What happens when Joe the Android Guy goes hands-on with the BlackBerry Passport: is it a cruel joke or a foreign, yet forgiving experience? Let’s find out!

Back in my early days of “smartphonery”, I went with Android and my brother went with BlackBerry – the one with the rollerball. You know which one I’m talking about. Today, the rollerball is gone and the latest and greatest is the BlackBerry Passport.

“Hey Joe, you haven’t used a BlackBerry in a long time, let’s see how you like this new BlackBerry Passport!”

That’s how the conversation began. I didn’t like BlackBerry very much back then, so I came into this “adventure” more than a little biased. (You’ve been warned.) Days later a packaged arrived in the Pocketnow Utah office. I opened the box and pulled out what looked like a Nexus 6 that had been cut in half, with a funky keyboard crammed onto the bottom – and I do mean “crammed”. 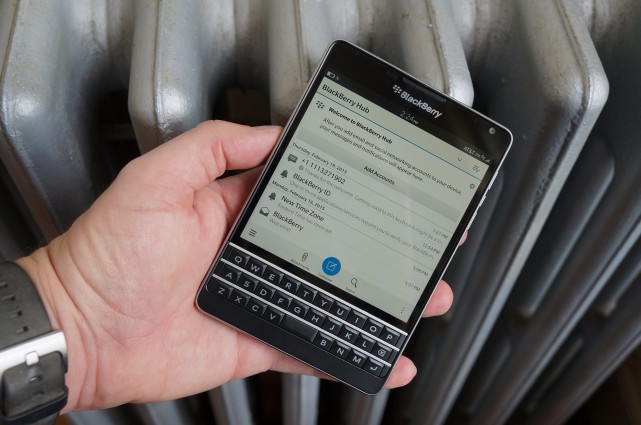 The phone itself is every bit as wide as the Nexus 6 – which is pretty wide! If you have a hard time holding wide phones, you’ll have a problem with this one, too. Fortunately, I don’t have that problem, but it’s worth mentioning. The Passport looks wider than it actually is, thanks to the almost square dimensions.

The button arrangement isn’t what I’m used to. BlackBerry put the power button on the top, which is a little awkward to reach. The volume up and down keys are right where they should be… but there’s a mystery button in the middle of the two. Pressing it apparently does nothing, but long-pressing it brings up the BlackBerry Assistant – BlackBerry’s answer to “OK Google”, Siri, and Cortana.

There’s no home button and no back button. Sliding up and to the right brings up the BlackBerry Hub – a stream of your email, calls, PIN Messages, and more. Swiping from right to left a couple times brings you to what Android users would call the “recents” menu, or “task manager”. Swipe again and you’ll get your first screen of icons. They’re arranged by long-pressing, but they aren’t alphabetized to begin with, so finding what you’re looking for will take a little more time until you get things situated. You can even group apps in folders, or by screen. 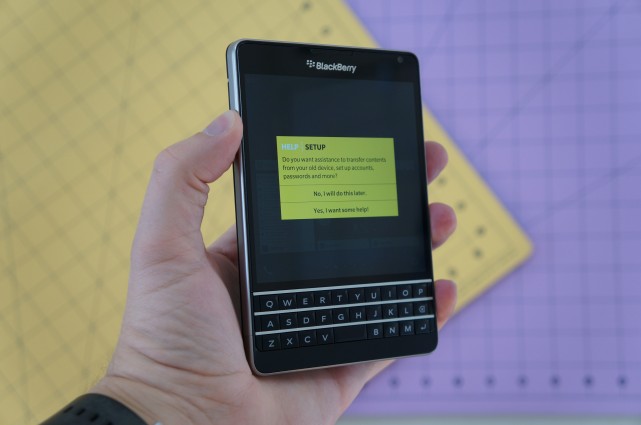 Apps are where things get really “interesting”. At first I was terribly disappointed by the lack of apps in BlackBerry’s store, that’s when I noticed the Amazon appstore. Could it be? Yup, BlackBerry runs Android apps. Finding them and installing them is the trick!

Since I already had an Amazon appstore account I was able to find the apps that I’d already purchased, install them onto the BlackBerry Passport, and start using them right away.

Not every Android app is available through the Amazon appstore. I haven’t even made my own apps available outside Google’s Play Store – not yet anyway. Google’s apps are notably missing, but that’s to be expected, isn’t it?

It felt strange using Android apps on a BlackBerry, but then I started to notice all the Material Design hints scattered throughout the BlackBerry OS. Every little part is “subtly Material”. It’s not really Google’s Material design, but it’s very reminiscent!

Also, the physical keyboard was a welcome addition, and one that I’ve missed – until I started using it. For basic typing, it’s great. For passwords and logging on to sites and apps, it was a pain. Switching from lowercase to uppercase was easy enough to do, but hard to tell if you were typing caps or lowercase since the letters on the physical keys can’t change.

There aren’t enough keys, either. BlackBerry addressed this by adding a row (or two, or three, or four) of soft keys above the physical keyboard. Transitioning from keys with wonderful tactile feedback and travel to “empty” and “abrupt” soft keys was a little disconcerting.

If it weren’t for all the gestures that you’ve got to learn (and remember) to navigate around the phone, if they were replaced instead with dedicated physical or on-screen home and back buttons, Android users would likely feel right at home. As it is, the BlackBerry Passport is “foreign”, but forgiving.

Looking for more BlackBerry coverage from Pocketnow? Check out our BlackBerry Classic review video, followed by Adam Doud’s written review rebuttal – and then tie it all together with an in-depth discussion of the modern BlackBerry world on episode 127 of the Pocketnow Weekly podcast!