A couple leaked screenshots claim to show off the new skinnable BBM interface for BlackBerry 10.

Following yesterday’s release of a leaked slide depicting RIM’s upcoming L-series and N-series BlackBerry 10 handsets, N4BB continues to publish some apparently insider documents, this time giving us a look at how BlackBerry Messenger may appear on the company’s new operating system.

Yesterday’s imagery mentioned the use of OLED screen components in RIM’s future lineup, a decision that appears to be affecting app design, as well. As you can can see in these graphics, the company has been working on a new BBM that features configurable color themes, including options for a darker appearance that reduces battery use. Depending on what you end up going with, power savings could be up to 75% below normal consumption rates.

This is far from a complete look at what to expect form BBM on BB10, but it at least serves to show the sort of things that are important to RIM as it makes decisions about how to present its new OS. That is, it knows that its user base spends a good deal of time on BBM, and values devices that can hold a charge, so it’s taking steps to make sure their phones aren’t running out of juice by mid-afternoon. If that’s indicative of the rest of the choices RIM has been making when it comes to BB10, it might be in better shape than it’s getting credit for. 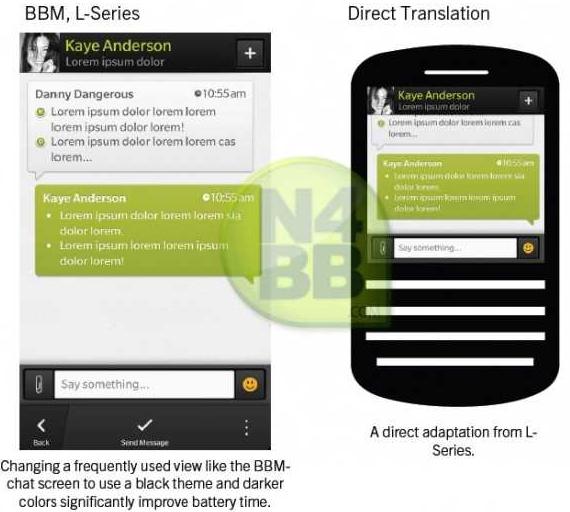