We’re not 100 percent sure about the BlackBerry KEY2 name, but a KEYone sequel is certainly right around the corner, and we have its full spec sheet already.

While John Chen’s dream of seeing the classic BlackBerry Bold 9900 revived and modernized may not turn into reality anytime soon, we’re probably not too far away from a couple of high-end India-exclusive releases, as well as the KEYone’s global sequel.

Likely to be branded BlackBerry KEY2 (or KEYtwo, or something along those lines), the second-gen touchscreen/QWERTY keyboard hybrid was reportedly codenamed “Athena”, carrying various model numbers starting with BBF100.

A BBF100-4 version, presumably meant for the Chinese market, recently obtained the regional telecommunications certification center’s seal of approval, confirming a whole bunch of key (no pun intended) specs and features, as well as a largely familiar design.

It’s pretty much etched in stone now that the BlackBerry KEY2 will retain its predecessor’s 4.5-inch 1080 x 1620 display while packing a beefed-up octa-core Snapdragon 660 processor and 6GB RAM.

There are two cameras at the back, boasting 12 and 8MP sensors, a single 8MP selfie shooter, 64GB internal storage space, Android 8.1 Oreo on the software side of things, and somewhat disappointingly, a slightly smaller 3360mAh battery also on deck. 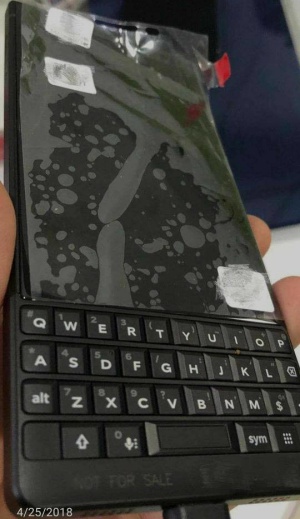 For what it’s worth, the BBF100 is 12 grams lighter than the BBB100, aka KEYone, as well as almost one millimeter thinner. Besides, the original’s battery life is so epic that a minor capacity downgrade can’t make much of a difference.

Oh, and just in case Tenaa’s product images are not clear and revealing enough, a real-life picture is also making the rounds with a closer view of the new physical keyboard. It’s not a glamour shot, but it tells us almost everything we need to know about the BlackBerry KEY2. Just release the thing already, TCL!