While BlackBerry’s first ever Android smartphone has hardly been selling like hotcakes, with or without discounts, the Canadian company that’s increasing its focus in the software landscape doesn’t want to throw in the hardware-producing towel either.

Not with (modest) shipment goals realized, profits on the horizon, and the high-end, much too pricey Priv set to be followed up by a robust, relatively affordable pair of mid-rangers.

Rendered not long ago based on sightings of prototype units, the BlackBerry Hamburg and Rome are further detailed today, courtesy of GFX Bench. Well, technically, only one of the two devices performed pre-release graphics performance tests letting nearly all its important features slip, but we’re probably looking at extremely similar handhelds here in terms of their internals.

The Hamburg and Rome will mainly differ as far as design and productivity goes, with a physical QWERTY keyboard fitted on just the latter, and a 5.2-inch Full HD screen apparently flying solo on the Hamburg. 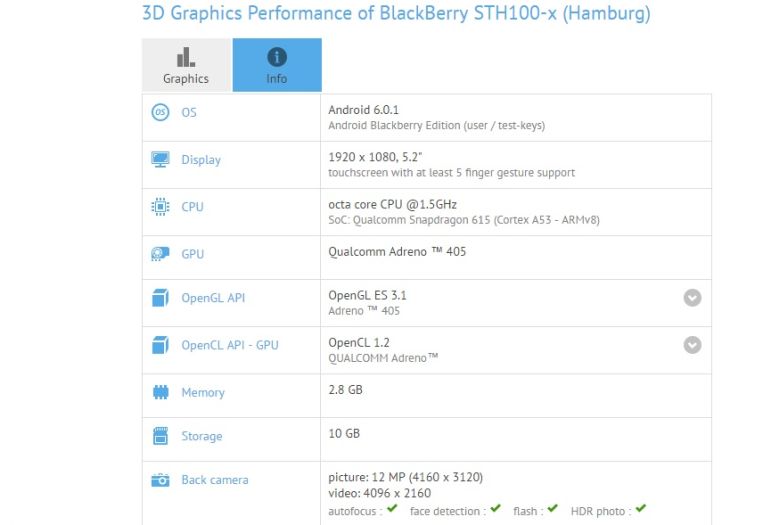 The STH100-x model number suggests this touch-only Android shares some DNA with the Priv, aka STV100-x, though almost everything about the BlackBerry Hamburg represents a downgrade. The 1080p panel, octa-core Snapdragon 615 processor, 16GB internal storage, not to mention the 12MP rear camera.

Then again, Marshmallow already runs the Hamburg’s software show, multitaskers get the same 3GB RAM as on the Priv, and the selfie shooter looks way better on paper, with 8 lavish megapixels. If BB pulls off its usual security magic, and prices this thing at no more than $400 unlocked, it may finally have a real winner on its hands.