In our BlackBerry Classic Review Rebuttal, we don’t only look at the device, we check out the BlackBerry lifestyle. 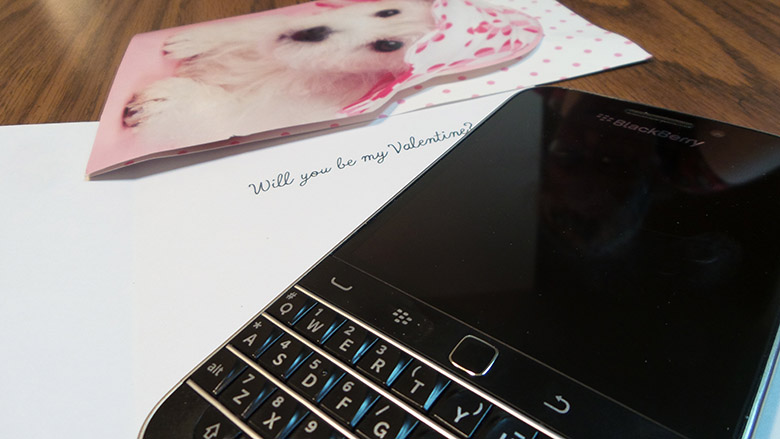 There are two kinds of people in this world – those who consider BlackBerry to be God’s gift to smartphones, and those who are wrong.

That’s actually not true. What is true is that there is a declining base of people out there who loves them some BlackBerry phones and after a few days, I’m starting to discover why. I’ve had the opportunity to carry around a BlackBerry Classic for just over a couple of weeks, courtesy of our friends at US Mobile, and I have a similar opinion of the device as put forth in Mr. Fisher’s original review, but from a perspective that is unique in a couple of key ways.

Second, I love weird phones, and carrying a BlackBerry in 2015 is in some ways “weird” by societal standards. So I wanted to kill a few birds with one stone, get back to my physical-keyboard-toting roots and be a BlackBerry user, if only for a bit of time. But what I didn’t realize was that being a BlackBerry user isn’t just about carrying a device. It’s a state of mind. It’s a lifestyle choice. It’s not one that I’m prepared to make full time, but I didn’t mind dabbling in it for a week or two. I play in the BlackBerry minors, but I’m not ready to go to the show. 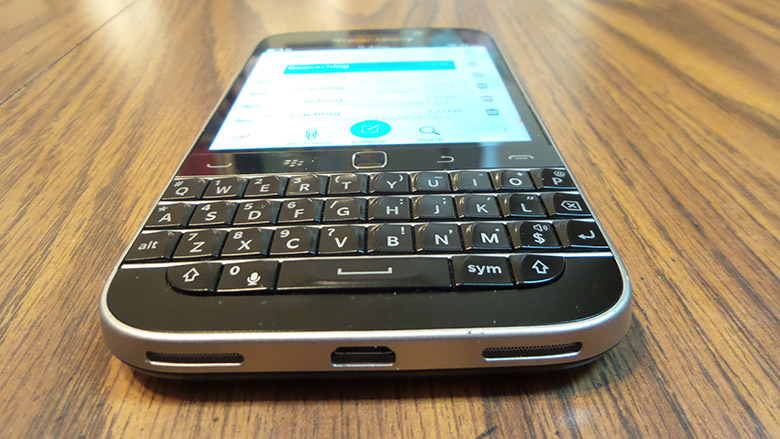 The hardware of this phone is exceptional. The device has a bit of girth and a bit of weight, but it feels great to hold. You don’t mind the heft of the device, because it feels, as Michael said in his video, “important.” The weight belongs there because this is a powerful device – not “powerful” as in top-of-the-line specifications (good God, not even close) – but “powerful” as in it’s a productivity powerhouse in a small package.

Keys to the city

The most notable part of the phone, as with almost every other Blackberry, is the keyboard. Physical keyboards are about as “in” as bell-bottoms and pet rocks. The Classic’s keyboard is a fine exception to that rule. Personally, I prefer the HP Pre 3’s physical keyboard in that it combines the right amount of squishiness and clickiness, but the Classic’s keyboard is responsive and surprisingly fast, once you get used to it.

One of our readers pointed out one keyboard shortcut that Michael failed to mention in his review. Start typing an email address in an email field, and press the spacebar where the “@” is supposed to go, and BlackBerry intelligently puts in an “@” symbol. The same happens with the dot after the domain name. This is life-changing for me on the BlackBerry, and I appreciate the tip.

The display on the BlackBerry is small. It is a 3.5-inch square with a resolution of 720 x 720. Some will point at the screen as a failing. I see it as simply the reality of having a BlackBerry physical keyboard present. It’s small, sure, but not so small as to diminish the experience. Scrolling exists for a reason, and the BlackBerry makes it even easier with the space bar shortcut key. Other than that, the screen is not remarkable. 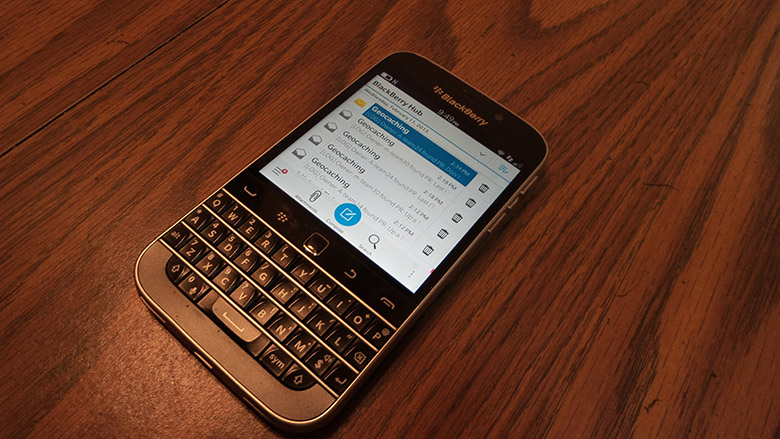 The software on the BlackBerry is also very well done. Far and away the most famous feature of BlackBerry OS 10 is the BlackBerry Hub. This is your one-stop shop for all things communication on your phone. I had five email accounts, Twitter, Facebook, LinkedIn, iGrann, and probably a few other accounts that I’m forgetting to list, yet the Hub doesn’t miss a beat with any of it. At first I wasn’t sure about it. Now it’s growing on me. I still like to have my life compartmentalized, however I no longer object to having everything in one place. I mean, I know you can customize the Hub to only display certain things, but isn’t that missing the point?

The part of the software that I enjoyed the most, though, was the one part that didn’t get talked about in the review. With BlackBerry OS 10.3, BlackBerry introduced the Voice Assistant. This Siri/Google Now/Cortana voice action center is not unlike what you’d expect from a voice assistant. There are no cards or sports scores or any kind of quick-glance information display like in Cortana and Google Now, but that’s not what I like those services for. I love voice input, and I use it as often as I can. 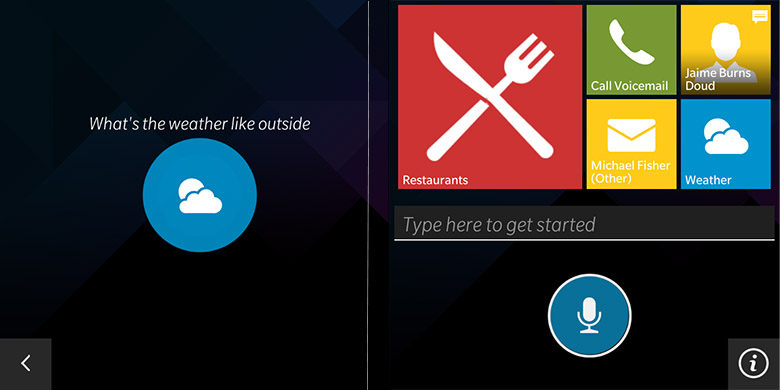 The Voice Assistant on BlackBerry isn’t necessarily the most personable assistant you’ll find. There is little chance of whirlwind romance with Joaquin Phoenix. It also has a very weird voice and accent, like Stephen Hawking trying to sound Dutch. But the tasks it can do, it does pretty well. You can ask the standard questions, like “Navigate Home” or “What’s the weather like outside?” and you’ll get the information you’re looking for, just like the others. But where the Voice Assistant stands out is in…you guessed it…communication.

With the Voice Assistant, you can compose an email. Sure, any service can do that, but you get granular control over the composition. You can change recipients, add or change the subject of an email, and add or change the message of an email, all with your voice. That kind of control is awesome. You can actually write a full and proper email with the power of your voice. Maybe I’m geeking-out here a bit too much, but I found it to be absolutely fabulous, and I will miss that part of it.

Then of course, there’s a downside to the software. We’re going to breeze over this section because it has already been said, over and over (and over and over): the app selection sucks. Yes, there is the Amazon App Store. Yes, you can side load Android APKs. Yes, you can even install Google Play and buy all the apps you want directly. But to do so, you have to use a fair amount of hackery, and a little Googling to find out how. Again, I thank the commenters from my first impressions editorial.

So the app selection is atrocious, and John Chen is mad about it. To those who need the apps, they’re there to be had if you’re willing to work for them. To those who don’t or aren’t, carry on, my wayward son. 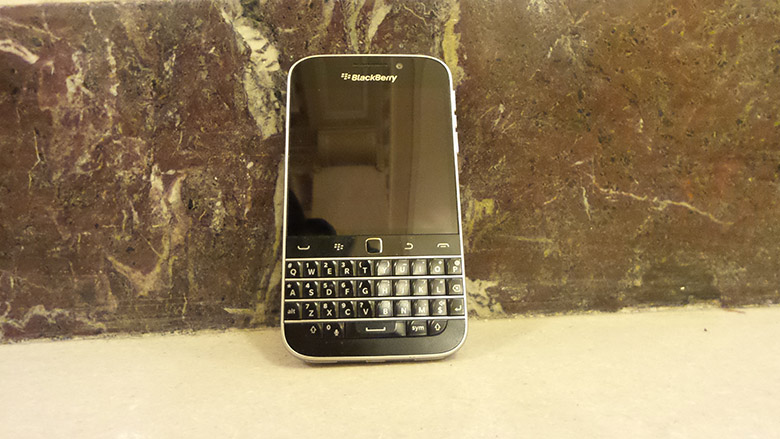 The rest of the phone falls into the “just ok” category from the camera, to the specifications, to the battery life. I will say that I enjoyed longer battery life than I’ve come to expect from smartphones. I don’t think that’s necessarily a testament to the battery’s durability, though. The battery life on the BlackBerry was really good because I didn’t really do a whole lot on it. I communicated, played the odd game of Sparkle, took the random photo or video, and I watched 10 minutes of an episode of House of Cards on Netflix because I could. Beyond that I was a productivity machine, pumping out emails and texts like there was no tomorrow.

This is not a condemnation of the phone. It’s the reality of the phone. If you want graphics and games and videos, then carry another phone or a tablet with you. This phone was not designed and built to attract user over from other platforms. This was built to give those currently on the platform a newer and better device. If you want apps and big screens and you want to play as much as you work, there are a ton of options out there. Go get one.

But, if you want to communicate efficiently and effectively and you don’t want to sift through an ocean of notifications to figure out why your phone just beeped, then carry a BlackBerry. But be advised, it comes with the lifestyle. Be prepared to field the questions from friends and bystanders – “Hey is that a BlackBerry?” Be extra prepared to answer the question that always follows: “Why?”

Once again, we’d like to thank our friends over at USMobile for our review unit. Be sure and check out out video review of the BlackBerry Classic!