BlackBerry 10 vs Windows Phone 8; Who’s The Next Underdog?

Underdog: One that is expected to lose a contest or struggle, or at least that’s what the dictionary says. Isn’t it amazing how times have changed? Five years ago, Microsoft and the now defunct RIM both mocked Android and iOS. They felt that they sold so many millions of phones that there was no need for their strategies to change. Now you find both of these companies competing for a third place.

Both their stories are the result of terrible strategic management, and not of bad products. Both did great in the enterprise, and consumers were slowly becoming accustomed to having a mobile device that was ready for more than just phone calls. On one hand Microsoft had some great partners that were willing to push the limits of hardware, like in the case of HTC and Samsung, and on the other hand RIM’s BlackBerry devices made the whole idea of carrying a smartphone something desirable thanks to some awesome designs.

The question is, who do you think will land third place in 2013? And even if one of these companies landed the spot, it’s not like if both Google and Apple aren’t working hard in shrinking the possibilities for the underdogs to grow. “Weed Killing” is actually a term in business, and it’s clear that the two top players are using all their power to eliminate even the underdogs from their roots.

So, at times when even being an underdog is a grim endeavor, who’s your pick? I’ll start with my predictions of which company has better chances and why, and hopefully you’ll provide your thoughts in the comments.

BlackBerry has something that’s extremely strong to its favor. They’ve been slow, but they haven’t committed suicide with existing customers. Obviously if we used Palm as an example of a slow company that didn’t commit suicide with their customers either and is now dead, it would be hard to consider this as a point in favor. What makes this point considerable though, is that to BlackBerry’s advantage, Microsoft has committed suicide twice already.

All of us at Pocketnow started as Windows Mobile users. In my case in particular, back when Windows Mobile apps cost $30 and Microsoft Reader ebooks another $20, I easily invested around $500 in apps and games to make the best out of my Windows Mobile devices. It was at times hit or miss for an app to work from one version of Windows Mobile to the next, or even from one device to the other, but developers would usually update their apps to fix these issues once you pointed them out. Then came 2010, and my $500 investment was shot dead by the same company that built it. Windows Phone 7 doesn’t allow Windows Mobile content to work on it even through emulation. Then comes 2012 and Windows Phone 8 shoots all of the Windows Phone 7 struggle in the foot again, and for those of you that debate that it’s only a matter of developers updating their apps, kindly ask Spotify why I’m still waiting. So the question is, can Microsoft be trusted?

BlackBerry may be notorious for being extremely slow in adopting new technologies like 3G or even Wi-Fi back in the day. None of their current BlackBerry 7 devices even support LTE for that matter. But this would be the first time that they make a leap from one OS to the other, and instead of going from a full-fledged stallion OS to a locked-down pony like Microsoft did by ditching Windows Mobile over Windows Phone 7, BlackBerry 10 is actually much better than BlackBerry 7. Yes, BlackBerry is killing the investment of their current customer base, but at least current customers will get a feeling of moving to something better. 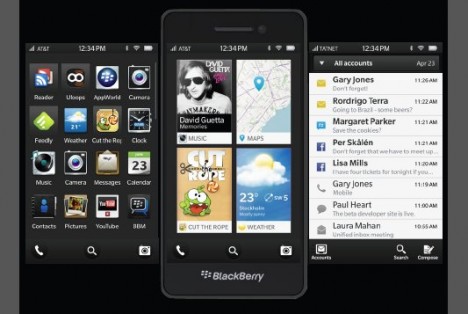 How many times have you seen Honda defy market trends with a square wheel instead of a round one? What isn’t broken really doesn’t require fixing. I still chuckle every time a Microsoft presenter tries to force you into seeing that the 2D colored squares on the screen that flip every now and then are beautiful. Surely I find it bold that Microsoft defies the skeuomorphic UIs that iOS and Android try to bring to the market, but is challenging the system really the only way Windows Phone 8 can differentiate itself? Microsoft has such a bevy of software solutions that would dwarf any competitor if only the company was smart enough to work together, and still all they have in mind is to convince you that the live tiles are beautiful.

BlackBerry on the other hand is not trying to reinvent the wheel. What they’ve done is figure out a way to make it smarter. Instead of having you jump between apps like crazy on iOS or Android, they’ve continued their unified strategy with the BlackBerry hub. It was successful for them in their past OS, and they’ve continued that with BlackBerry 10 in a higher level. I still debate if there’s anything intuitive about so many gestures on the OS, but hey, at least it’s only one thing to learn.

BlackBerry is giving us apps, not excuses

So, in this day and age, going from iOS to Android or back is actually not difficult. Both platforms share an almost identical list of apps, so you won’t really feel that you’re missing anything if you jump ship one day. If you decided to do the same with Windows Phone, you’re in for a nightmare.

Windows Phone enthusiasts will tell you that you don’t need Dropbox because you have SkyDrive, or that you don’t need Spotify because you have the Xbox Music Pass. New users will most likely fit right in to that argument. The problem is that some of us old users don’t want to move to SkyDrive. We want Dropbox. Some of us don’t want to lose all the work we put into building our Spotify playlists just because Microsoft isn’t bold enough to get the developers to update their app to Windows Phone 8. Yes, Microsoft built their own Facebook app because the parent company didn’t want to, but can we really consider that the Microsoft solution provides the same experience? Some of us want apps, not excuses.

BlackBerry on the other hand was very smart about this. Instead of boasting over their 70,000 apps in BlackBerry 7, what they did was focus on the top 1,000 apps that iOS and Android are currently swimming on, and they focused on getting those apps on BlackBerry 10. Spotify may not be there yet, but DropBox is along with others. Windows Phone 8 is still stuck with Asphalt 5, and BlackBerry 10 users will be able to play Asphalt 7 on launch day. So would it be hard for iOS or Android uses to move to BlackBerry? Not so much.

Obviously there are more things to consider when comparing both of these platforms or companies. Who knows, probably my arguments will prove themselves to be wrong in the next month or so if Microsoft smells some real coffee from a third competitor. Being an underdog isn’t the best thing to shoot for at any time in the mobile space. Just as both RIM and Microsoft will struggle, the top players will struggle as well to remain at the top, so it’s still anybody’s game.

What about you? Do you feel there are other arguments not mentioned here that would allow Microsoft to take the edge over BlackBerry? Leave us a comment down bellow.