Cyber Monday Update: We mentioned quite a few Cyber Monday deals last week, like AT&T’s basically free-on-contract HTC One X (sadly, not plus) or Samsung Galaxy S II Skyrocket. Beyond that GS2, Samsung’s got a few additional offers mentioned on its Facebook page, including savings on a second Samsung device when you buy one through AT&T, and don’t forget that those Samsung T-Mobile deals we talked about are still good, including a $100 16GB Galaxy S III.

Thanksgiving is now upon us, for those of you living in the US, at least, while for today that means turkey, uncomfortable interactions with relatives, and an endless assortment of marathons on TV, tomorrow it means that the holiday shopping season has officially begun. That’s right: Black Friday.

If you can manage to brave the crowd and survive the frenzied hordes of fellow shoppers, there are some decent deals to be found out there. In the hopes of pointing you in the right direction, we’ve rounded-up some of the best sales out there on smartphones and tablets, including both tomorrow’s deals as well as those that will be good on Black Friday’s internet-age cousin, Cyber Monday.

This is all a lot of information to take in, so we’re going to try hitting the big deals on a carrier-by-carrier basis. After all, like it or not, most of us in the US are locked-in to a contract with one carrier or another. If you’re lucky enough to not be tied-down, feel free to browse through all of this, or otherwise jump right to your carrier of choice.

Verizon‘s got a special-edition cranberry-red Motorola Droid RAZR, similar to the red models that had been employee exclusives, that will be going free-on-contract. Of course, that’s the RAZR and not the RAZR HD, so it’s not as hot as it could be. The carrier will also have a Samsung Galaxy Tab 2 7.0 for just under $100, and a few accessory deals, as well; you can get a Jawbone Jambox wireless speaker for about $100 – 50% off – with the purchase of a phone.

Sprint‘s offering the 16GB Galaxy S III for only $50 on-contract, but if you’d rather find something that’s free-on-contract, the carrier has some other Samsung deals worth checking out. Both the Galaxy Victory 4G and the Galaxy Nexus will be free with service agreement and after cashing-in applicable rebates.

What about AT&T? We already heard about the Lumia 920 savings it would be offering, with the brand-new WP8 handset going for only $50 on-contract. While AT&T’s selling the new HTC One X+ for $200, you might want to wait until Cyber Monday, when the original One X will be going for essentially free-on-contract. You’ll find the same deal for the Motorola Atrix HD and Samsung’s Galaxy S II Skyrocket, as well as Nokia’s Lumia 900.

T-Mobile‘s seriously pushing Samsung hardware, with offers like a $100 Galaxy S III, a $200 Galaxy Note II, and older models like the Galaxy S II or Galaxy S Blaze 4G free-on-contract. While those offers start on Friday, they’ll run well into next month, so you needn’t rush.

Of course, Black Friday isn’t so much about smartphone carriers as it is big retail giants, and a number of them have some deals of their own that are well worth checking out. 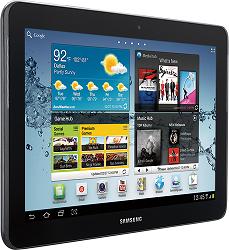 Best Buy has a number of tempting offers, but its most attractive may be the nearly-$50 Galaxy S IIIs. While Sprint is already offering the same deal itself, you can also get a $50 AT&T GS3 from Best Buy. If you can’t fight past the Best Buy crowds, Radio Shack will be matching those prices. Walmart has a slightly different deal, which may or may not be more appealing; its Galaxy S III models will be $129 on-contract, but all come with a $100 Walmart gift card, offsetting much of the cost.

There will be plenty of tablets up for sale this weekend, and while the savings are still decent, they can seem a bit meager compared to the deals on some of these phones. Sears has the 16GB Samsung Galaxy Tab 2 10.1 for just under $300, and Office Depot will let you save a few bucks on the new 32G Nexus 7, going for $230.

If you’re keen on purchasing a Surface tablet, Microsoft is running a small deal on a Surface bundle in its retail stores: if you feel like grabbing a backup keyboard cover, or just want one each of the Touch and Type varieties, the second will be $50 off.

With so many different retailers out there, this is all just scratching the surface of the full range of deals that will be available, and some new ones are bound to pop-up at the last minute. If you catch wind of a killer deal we missed here, be sure to post about it in the comments, so we can all get in on the savings.

Update(s): The deals are just continuing to pile up. Google is offering some discounts on Google Play app and media purchases. Apple’s got some deals of its own ready to go on iPads and their accessories. Windows Phone users can also check out some big app sales, with games discounted as much as 60%.

Amazon’s got the Lumia 920 for essentially free on-contract.