Bixi Review: Touchless control of your smartphone is just a gesture away

Every now and then, my job allows me to play with something really cool. Maybe it’s cool because it’s powerful, or has great hardware, or something else. Sometimes, you get to use something that feels like using the future. That’s what Bixi brings to the table. Bixi is a Bluetooth remote control for your smartphone or tablet that allows you to control your device with just a wave of your hand.

Touchless control of your phone is a really great concept. There are practical reasons why you would want to. Bixi’s team cites its inspiration as using a phone while cooking, and your hands are covered in food. Definitely a need, if a bit niche. But expanding this model, touchless control of your smartphone – everything from using your voice to waving gestures over a thin puck – allows you to slip into your best Tom Cruise in Minority Report character. 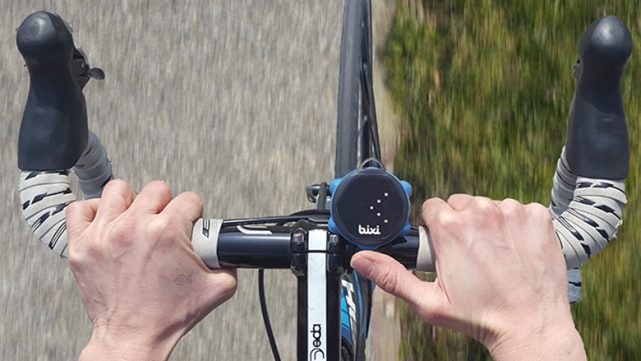 I had the opportunity to test out the Bixi with alpha software for about two weeks, and it’s a pretty fun little device. The Bixi remote can connect to your phone or tablet, but also can control devices like a GoPro, Smart lights, and other devices with a wave of your hand. My testing was performed solely using my Honor 8, focusing mostly on the phone and music playing functions.

And that was generally enough for me to get excited about the Bixi. I set up a few predetermined text messages and phone call contacts, and controlled my music. The Bixi can recognize seven different gestures which can be preset to various functions, depending on the profile you choose in the app. For the phone function, you can choose a contact and even a preprogrammed text message to send to the contact of your choice.

An IR camera, similar to that in an Xbox Kinect, detects the gestures above the device. The range is limited to 20 – 25 cm to conserve battery life. My demo unit lasted the entire two-week review process, only needing one charge along the way. The CEO/founder of Bixi, Narayanan Vijayaraghavan, anticipates up to a month of battery life in the final product.

As you gesture above Bixi, LED lights indicate that your hand has been detected, and flash to indicate what gesture was detected. Supported gestures include a swipe up, down, left, right, plus moving your hand up and down (away/toward the Bixi), plus a “tap” gesture. Each of these gestures has its own function, depending on what profile you have open. For example, in the music profile, swiping downward plays and pauses, swiping to the right skips to the next track, and so on. 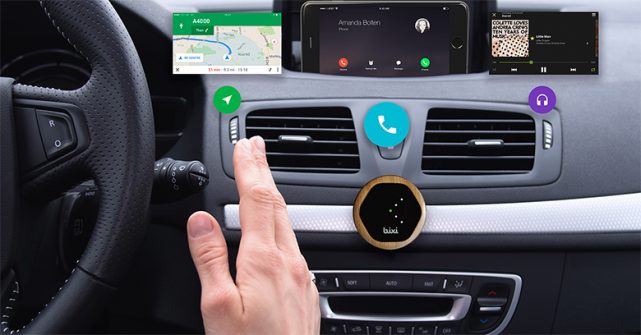 There are also accessories you can pick up which allow you to mount the Bixi to your bike/car. Personally, I’m most excited about the potential bike application. I dream of keeping my phone in my pocket, or in a mount and swiping over the Bixi to text my wife to open the garage door. Also using Bixi to answer an incoming call, or even turn on/up music while riding is one of those ultra-futuristic scenarios that make this technology exciting.

And really, that’s what we’re all doing here. We’re looking for technology that excites us going forward. That being said, the device is not without a few downsides. Most notably, the software isn’t quite there yet – prone to occasional crashing and missing some crucial functionality that would make the app nice to use. Plus, Bixi feels like it belongs somewhere between truly useful and a gimmick, but the fact that I’ve been using it for two weeks and I haven’t decided yet speaks well for it.

Bixi is currently fully funded on Kickstarter with more than twenty days to go. Most of the early rewards are gone, so a Bixi unit will set you back about $80 at this point. That’s another part that’s a little hard to take. Bixi is cool, but is it $79.99 cool? That’s for you to decide, but assuming the developer can work out some of the software bugs, I would have to think I’d be willing to pony up. I’ve been looking for a device like this to help me power through my bike rides, so for that alone, it would be worth it for me. Plus, I love the future of devices, and I think Bixi might be part of that future.

Alcatel 1SE features a trio of cameras at the back, while the Alcatel 3X adds an extra macro camera and packs a more powerful MediaTek processor.