If real, the Sharp Aquos S2 looks like a total game changer, with zero bezels and under-glass fingerprint recognition. The S1 is slightly less spectacular.

The makers of the original “edgeless” smartphone kept a surprisingly low profile in the bezel-killing wars these past couple of years, letting Xiaomi, Samsung, LG and Essential come closer and closer to the dream of a mobile device with absolutely no wasted space on its front.

But it seems there’s at least one slim-bordered Sharp handset in the pipeline almost ready to follow in the footsteps of 2014’s chintastic Aquos Crystal. Purportedly pictured in the flesh on the Japanese company’s assembly line, the Aquos S1 doesn’t look all that different from the as-yet unreleased Essential Phone.

Slightly curvier around the edges, this rumored Snapdragon 630 or 660 mid-ranger also appears to feature a larger top selfie camera cutout and thicker bottom bezel, possibly including a physical home button doubling as a “traditional” fingerprint scanner.

At the end of the day, that doesn’t sound particularly exciting, but the Sharp Aquos S2 is an entirely different beast. Unfortunately, the only piece of evidence pointing to the existence and imminence of this truly full-screen powerhouse is a suspiciously high-quality render. 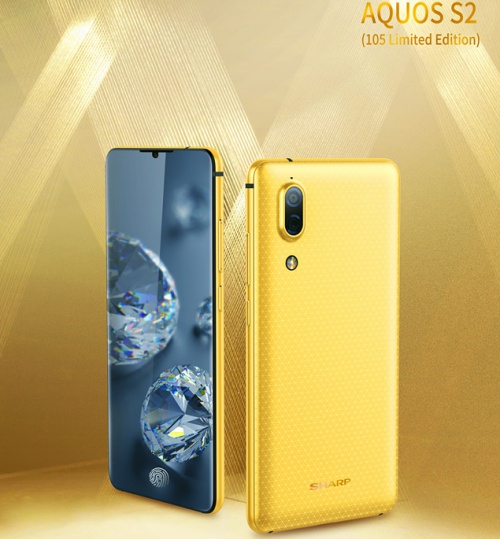 This could be merely a concept, even one envisioned by an overly imaginative fan, but what’s the harm in dreaming? After all, it’s obvious that, if real, the Aquos S2, aka “105 Limited Edition”, will come out in very small numbers in one or two Asian markets, similar to last year’s Xiaomi Mi MIX experiment.

In addition to a beautiful “Infinity” display wrapping around every side and corner of this phone’s face, there would be a teeny-tiny front shooter hole and, yes, under-glass fingerprint recognition. That’s the super-advanced technology giving Samsung and Apple so many headaches, which makes this “leak” that much harder to trust. With Foxconn in its corner though, maybe Sharp can finally achieve the impossible.