I think I found the best way to Video Conference

Remember when we had a video calling standard that worked with all mobile phones around the world so you could just call someone up and see them?
Published 17 June 2019, 14:00 EDT

Instead, today we have dozens (maybe hundreds) of different apps designed to do video & voice over the internet protocol (VOIP).  Some video conferencing apps and services use the standards compliant Session Initiation Protocol (SIP) and Extensible Messaging and Presence Protocol (XMPP), but most do not, or if they do, they’ll neglect to implement the intoperability aspects so that you’ll be stuck in their silo and have to peer pressure people into using those often invasive apps.

Most apps like Facebook Messenger, Instagram, Whatsapp, Viber, Skype, Telegram, Signal, Facetime, etc. all use different types of internet video calling methods and none of them are interoperable with each other. That means you can’t video call a Whatsapp user from Skype or Facetime or anything else other than Whatsapp.  That’s not good for freedom of choice and openness at all.  Companies do this mainly to try to lock people into using their products so that they can take advantage of that user-base with things like ads, privacy-invasive usage tracking, etc.

Those are mostly one-to-one personal consumer friendly video calling services that are built into instant messaging apps. There are also a whole slew of other business-related video conferencing and meeting services like GoToMeeting, WebEx, Skype for Business/Lync/Teams, etc.  Some of those are a little better since they allow participants to join via browser interfaces on desktop computers without having to set up accounts and whatnot, but they’re still proprietary and costly.

I’ve been keeping an eye on the growth of Matrix as an open-source decentralized messaging protocol since it seems to be much better than Telegram or Signal, and some Matrix clients use another service for the video calling portion called Jitsi.

How does it work?

With all of those other apps, you usually have to  get your friends to sign up and make an account and download the app and add each other’s account names to the app or share your phone number with the service and all of that annoying crap.  Or in the case with Apple Facetime, you have to get them to buy an iPhone or iPad or Mac. With Jitsi Meet, all you do is type a URL, send it, and when your friends or colleagues click it… they join the video call!  That’s it.

Now if you open the link on an Android or iOS device, you’re going to get forwarded to the app store where you can download the Jitsi Meet client. As soon as it installs, there will probably be a “continue” button which will instantly dump you into the video calling room.  Again… you barely have to do anything other than press “install” and “Continue”.  No sign-ups, no tracking, nothing.

On a desktop Windows PC, Mac, or Linux device, you’re going to need a web browser that supports WebRTC.  Most people are probably already using one since it’s been supported on Firefox and all Chromium-based browser variants for a while. If you want to use this with someone that has Internet Explorer from 2013, they’ll have to install a newer browser. Microsoft Edge on Windows 10 also does not support WebRTC, but it will when the Chromium-based update arrives.  And Jitsi will not block those browsers from working with the service unlike what Google does with Google Meet and Google Duo.

Typing the URL is super simple too.  It’s like this:  https://meet.jit.si/PocketnowIsTheBest

Go ahead and click that if you want to join a video call right now and talk to whomever else just read this paragraph and also clicked that link. 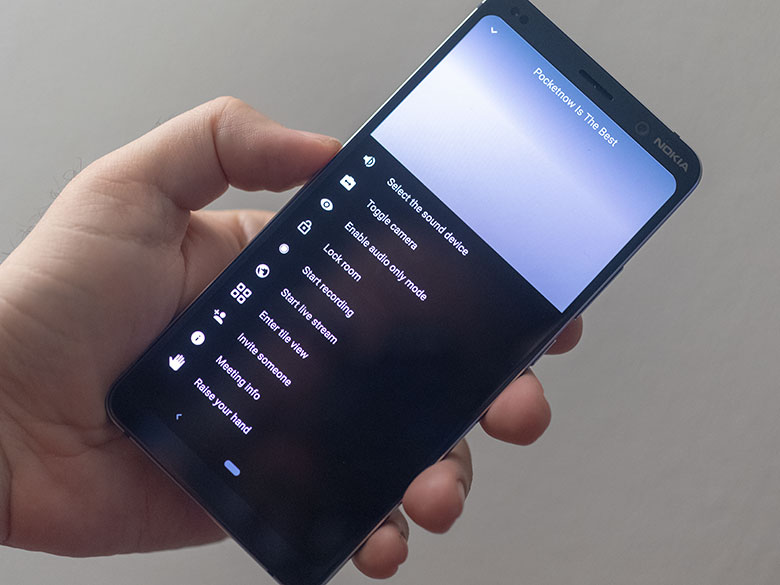 Obviously, you can send links like that any way you want. You can email it, add it to a calendar meeting request message, add it to a QR code, print it on a postcard, type it into Slack, WhatsApp, FB Messenger, Instagram, Signal, Telegram, Twitter, SMS, ICQ, IRC, Riot IM, Delta Chat… whatever!  Also, if you have a different friend on each of those messaging services, you can send it to all of them and everyone will be able to join the video call in perfect harmony with a very low barrier to entry. 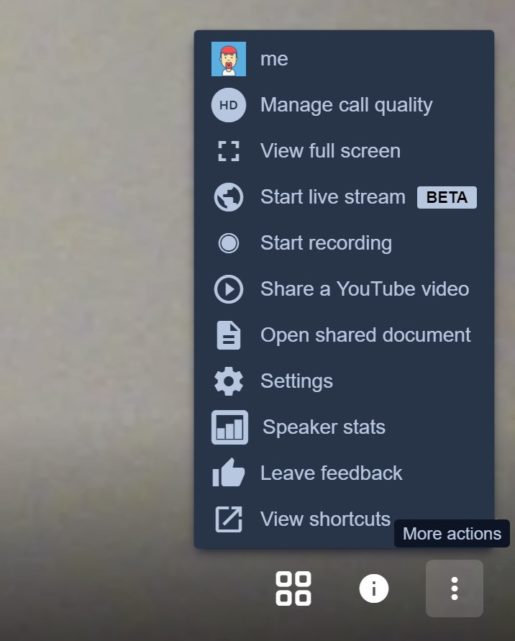 Jitsi Meet is more than just video calling too.  On the desktop browser, there’s screen sharing and document sharing. All apps also have YouTube live streaming, and recording options.

Being able to click a link to join a video conference… Is that TOO easy?  Couldn’t people just coincidentally join the same room as me?

Yes, there’s also end-to-end encryption!  For one-to-one video calls there will be a direct peer-to-peer connection.  That’s not possible with more than two people, so larger conference calls will be routed through the Jitsi Videobridge server which passes everyone’s audio/video stream to all of the other people right away as opposed to mixing them.

The server code is completely open source and downloadable too, so if you want to audit it yourself to find any possible security problems, feel free.

Oh okay, you want even more security?  No problem. You can make your own Jitsi Meet video calling server and take full control over who can access it. The apps have settings fields where your users can easily type the URL of your own server or any other Jitsi Meet server you might want to use. Obviously, making your own server is going to be a little more difficult and you’ll have to buy the hardware to do it, but that’s the price of technological independence & freedom.

This decentralized nature of the Jitsi video calling server means it can’t really be shut down.  If meet.jit.si stops working at some point… anyone else can just install the software on another server at another URL and get the same functionality. That’s the kind of decentralized nature that has made internet standards like the World Wide Web’s HTML and Email so long-lasting and far-reaching.

There are very few limitations in using Jitsi Meet for video calls and video conferencing. One big limitation is the processing power and internet speed of your server. Jitsi Meet doesn’t limit the number of people who can join a video conferencing room at one time, so the more people you add the more likely you’ll have server resource problems and you’ll need to buy better server hardware.

The other limitation is that there isn’t any kind of notification that lets you know when someone has joined a room if you are not already in that room. You can’t really do that without adding potentially privacy violating user registration features and that’s something we want to avoid.  Plus, how often do you really make a video call without scheduling it ahead of time?  Never?  Many people don’t even make voice phone calls without scheduling them ahead of time via email anymore.  Sending a Jitsi Meet link in a Meeting Request email (or instant message or whatever) is a much better way to do the video calling thing since you can make sure you’ll be dressed and located in a properly quiet, well-lit area that’s conducive to video conferencing.

Have you ever heard of Jitsi before?  What other video calling apps do you still use?  Let us know in the “Discuss This Post” link below.

The Oppo Watch 2 smartwatch proved to be quite successful last year, and the company will release its successor on July 27.

Google is working on improving the existing Wear OS system and is working on bringing a number of updates and improvements to the platform.