These are currently the best prepaid solutions available in the U.S.

Plan pricing for prepaid solutions are better than ever, but which is the best? Learn about the best prepaid plans in this in-depth breakdown!

How much do you spend each month just to stay connected?

As cell phones – namely, smartphones – have increased in popularity over the last decade, the cost of keeping them connected has slowly crept upwards. Cheaper functions, like voice calling and SMS, have taken a back seat to the more convenient and bandwidth-hogging mobile data. As such, calling plans and text messaging are now, more often than not, offered in unlimited quantities. However, gone are the days of $20 and $30 unlimited data plans (unless you’re lucky enough to be hanging on to a grandfathered plan).

The cost of consuming our favorite content from practically anywhere at any time has gone up significantly. It isn’t uncommon for individuals to be spending upwards of $100 each month for a limited amount of data with an unlimited calling and text plan. It isn’t cheap, and for many, the ability to check Facebook while waiting in line at Starbucks or watch funny videos of cats on the train simply isn’t worth the high monthly rates.

This ultimately led to a surge of MVNOs – mobile virtual network operators who purchase wholesale access to existing wireless networks and resell the service branded as their own – here in the States. Popular entities such as Virgin Mobile, SIMPLE Mobile, and Straight Talk are just a few of the popular MVNOs.

Through these virtual wireless providers, you can keep your smartphone connected each month without breaking the bank. But there are so many. Which should you choose? Which prepaid service has the best plans?

Allow us to break it down for you with the best prepaid services here in the U.S. 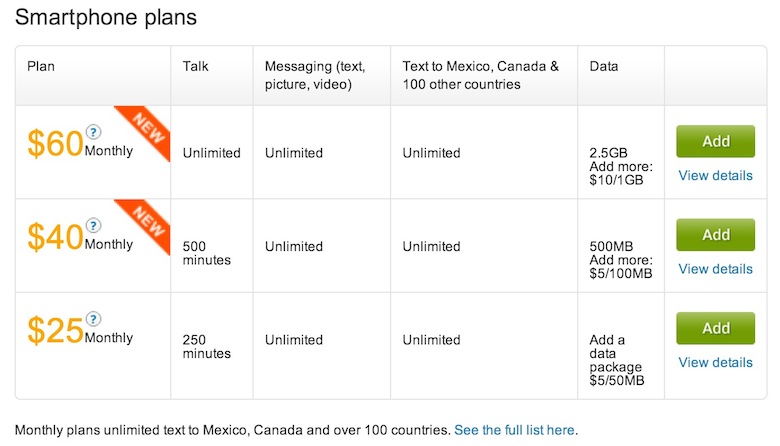 To kick things off, many of the major wireless providers here in the States offer their own prepaid services. AT&T, for one, has a decent offer called GoPhone.

Paying just $25 over a 30-day period will get you 250 minutes for voice calls and unlimited SMS and MMS within the U.S. It also includes unlimited SMS to Mexico, Canada, and other 100 countries. This plan does not offer any data, however. It’s an additional $5 charge which will only net you 50MB of data. If you’re going to use data – at all – don’t go with this plan.

Let’s be honest, though. Most of us need and thrive off the convenience of data these days. For those who need data, AT&T’s offer isn’t terrible. For $40 each month, you get 500 minutes, unlimited SMS and MMS, and 500MB of data. But serious data users will want to opt for the largest plan – $60 monthly. This will get you unlimited minutes and SMS/MMS, as well as 2.5GB data. Each additional gigabyte is just $10.

AT&T’s prepaid offerings aren’t the best, but they could be far worse. The largest prepaid plan is $5 cheaper than AT&T’s no-contract individual plan and comes with 0.5GB more. Score! 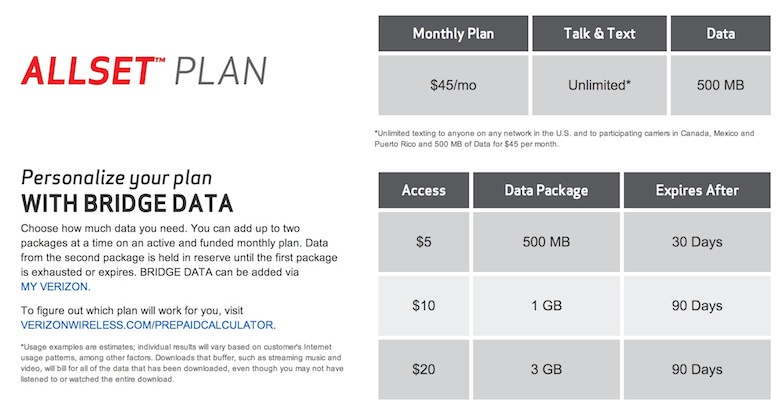 Like AT&T, Verizon Wireless also has a prepaid service, which it calls ALLSET. ALLSET comes with just one plan; it’s $45 per month and it includes unlimited talk and text to anyone on any network in the U.S., Canada, or Mexico. This plan also includes 500MB of data.

Best of all, as of last month, ALLSET data users now have access to Verizon’s 4G LTE network, meaning they’re no longer stuck on the aging 3G network. More than anything, Verizon’s LTE network is now the major draw for ALLSET.

The stipulation here is that you can’t bring just any ol’ phone to ALLSET. It has to be a Verizon-branded CDMA-compatible smartphone. This means, if you don’t already have a smartphone to use on ALLSET, you’ll have to purchase one, which may be a deal breaker for some, considering the popularity of the BYOD model in the prepaid market.

Virgin Mobile is a popular prepaid option that’s been around for several years now. It operates on Sprint’s network, so, depending on your location, Virgin may already be off the table. However, if Sprint has adequate coverage in your area, Virgin is definitely worth a look.

Its plans start at just $35 per month, which includes unlimited data, unlimited text, and just 300 minutes. For another $10, you can bump your monthly minute limit to 1,200 minutes. And for $55 each month, you get unlimited everything.

With Virgin, there is a catch – as is normal on most prepaid services – with the term “unlimited”. Only 2.5GB of data is provided at 3G and 4G speeds. After that, you will be throttled and will succumb to 2G speeds – a small price to pay for … well, a small price to pay.

Since Virgin operates on Sprint’s network, it also requires a CDMA-compatible smartphone – a deal-breaker for some.

Like Virgin, Boost Mobile has been around for a while, and it, too, operates on Sprint’s network (again, a CDMA smartphone is required).

Like with Virgin, you definitely want to make sure Sprint has solid coverage in your area and the device selection is the biggest shortcoming. 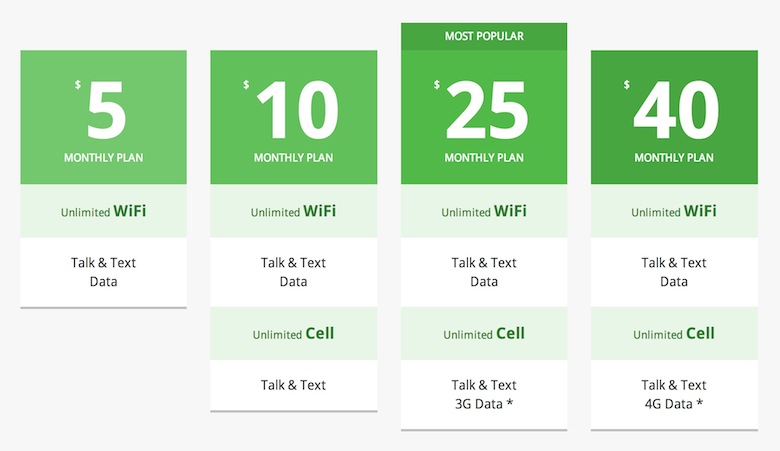 Republic Wireless is another Sprint-powered MVNO, and its pricing is hard to ignore.

The catch with Republic Wireless is the device selection. Right now on its website, there are just two smartphones to choose from — the Moto X and Moto G, both awesome phones in their own right. However, you do get 5GB of data before you’re throttled. And you get a pass the first time you exceed the threshold (or after six consecutive billing cycles without exceeding 5GB); Republic will give you another 5GB of data to get you through the month without being throttled.

Provided coverage is strong in your area, Republic Wireless is hard to pass up, if you’re in the market for some prepaid service.

Straight Talk is a bit of a different beast. You can choose between which network you’re going to operate on, based on the phone you currently have and the SIM card or access code you purchase. You can purchase either a T-Mobile or AT&T compatible SIM card or a CDMA access code for unlocked CDMA phones.

You can also purchase a phone through Straight Talk if you don’t already have one – but the draw of Straight Talk is the ability to bring your existing phone, number, and network and get close to what you already had for a fraction of the price.

Straight Talk offers two separate tiers of plans for use inside the U.S.: $30 and $45 per month. At the $30 price point, you get 1,500 nationwide minutes, unlimited SMS and MMS, and 100MB data. The higher tier offers unlimited minutes, SMS, MMS, and data. Provided you have an LTE-compatible smartphone, you get your first 3GB of data at LTE speeds. After that, per usual, you will be throttled.

There is an international plan, as well, for those needing to call outside the U.S. For $60, you get everything in the $45 plan, plus international calling to over 1,000 destinations worldwide.

What’s unique about Straight Talk is the ability to prepay for longer terms than just 30 days. Of course, with a prepaid account with many MVNOs, you can simply overfill your account and let it slowly pull from the funds each month. But with Straight Talk, you can prepay for either three, six, or 12 months. And for each, you get a slight discount on the standard monthly rate. For instance, if you purchase 12 months of service, you will pay $495. Normally, at $45 per month, 12 months of Straight Talk service would be $540. So prepaying for a year will save you an additional $45 – or you effectively get a month free. 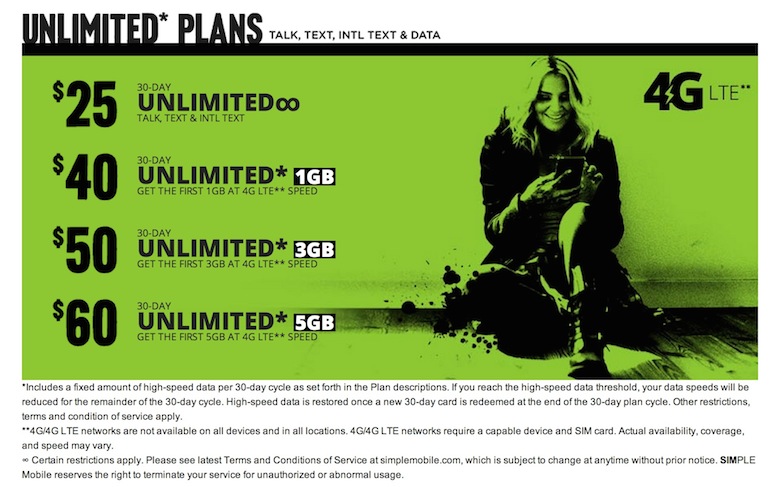 SIMPLE Mobile also encourages users to bring their own phone to start up service, though it also offers over 60 smartphones for purchase.

Its plan offerings are pretty straightforward. The lowest plan, $25 every 30 days, will net you unlimited talk, text, and international text. The next step up, $40 per month, will get you everything from the $25 plan plus unlimited data – the first gigabyte will be at 4G LTE speeds, provided you have the right equipment. The $50 and $60 per month plans increase the LTE data to 3GB and 5GB, respectively.

SIMPLE Mobile operates on T-Mobile’s network. With SIMPLE, you won’t get as much for your money if you’re looking at the smaller tiers, but if you’re looking for more 4G data, you can upgrade to higher data allotments than you can with Straight Talk. Just make sure T-Mobile has sufficient coverage in your area.

T-Mobile also offers prepaid services, though they’re not quite as cheap as other options.

The base plan is $50 per month and offers unlimited talk, text, and data. However, after just 1GB, you will be throttled. Jumping to the $60 per month plan will increase the 4G LTE data limit to 3GB. Increase it to 5GB by jumping to the $70 plan. Or if you need truly unlimited data – no throttling with 5GB mobile hotspot – simply opt for the $80 per month plan.

The downside here is the pricing. It’s slowly inching back up towards that $100 threshold. However, it’s the only prepaid offer that comes in the form of truly unlimited 4G LTE.

So which should you choose? 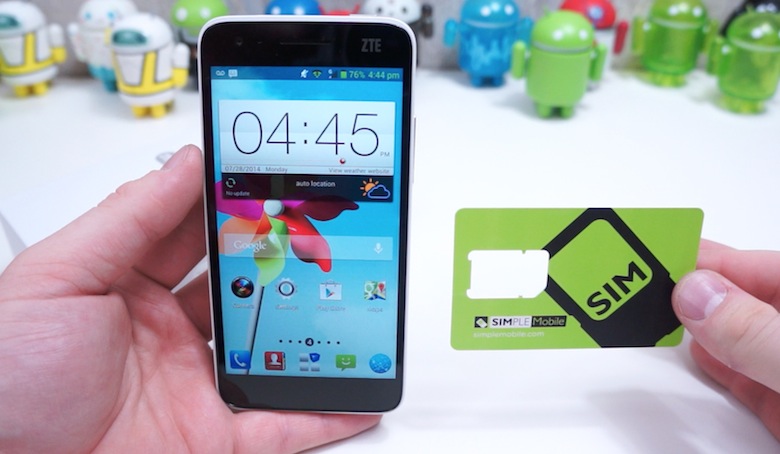 There isn’t a clean-cut answer for everyone. It ultimately boils down to how much data you’ll need, pricing, and which network has the best coverage where you will be using it the most. I can, however, break it down for you with some takeaways:

The thing you have to understand when taking the prepaid plunge is that you’re getting wireless services bought at wholesale prices, rebranded, and resold. Obviously, you’re not going to find anything comparable to postpaid plans for a fraction of the price. Unlimited talk and text are pretty much the standard, but 4G data is going to be throttled – from practically all MVNOs – between 1GB and 5GBs. The absolute most data you can get from a prepaid plan in the states is 6.5GB through Verizon’s ALLSET, and you’re going to pay a pretty penny for it – $45 for the base and $40 in data, or $85 in all.

If you set your expectations and curb your data usage, you will have no problem finding a prepaid offer that works perfectly for you.

So which is the best? It’s tough to narrow it down to just one MVNO or plan. But if I were to pick a blanket prepaid plan to recommend to the majority, it’d be Straight Talk’s $45 plan, mainly because practically any unlocked GSM or CDMA smartphone is compatible and it offers 3GB of LTE data before being throttled. I used it myself for several months and never ran into a single issue.

Did we miss a prepaid service you think should be on the list? Do you have a personal experience with some of these prepaid plans? Tell us about it in the comments below!