ZTE is apparently preparing to join the Snapdragon 835 flagship phone party with a mystery model likely to be dubbed Nubia Z17.
Published 01 May 2017, 08:14 EDT

Snapdragon 835 collaborators Qualcomm and Samsung seem to have managed to avert disastrous delays after all, with the Galaxy S8 and S8+ out and about as planned, limited Xiaomi Mi 6 sales also underway in China, likely to be followed by the Sony Xperia XZ Premium and HTC U 11 before long.

Google is working on a potential trio of next-gen Pixel phones with SD835 processing power as well, and then there’s ZTE. Unfortunately, we have no inside information to share on an Axon 7 sequel that’s probably around the corner either way, but a mysterious Nubia NX563J just paid Geekbench a quick pre-release performance-testing visit.

Already running Android 7.1.1 Nougat on the software side of things, the Z11’s presumed follow-up may see daylight in a matter of weeks. With an MSM8998 motherboard, of course, designating an octa-core 2.4/1.9GHz Snapdragon 835 SoC based on 10nm FinFET architecture. 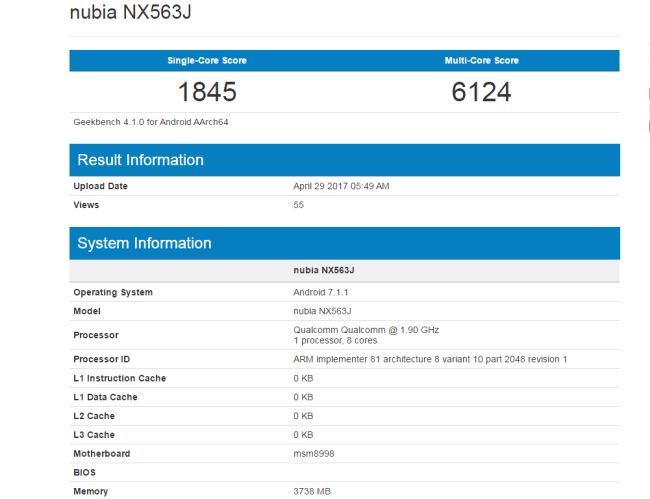 Odds are this won’t be called Nubia Z12 or even Z13, as ZTE’s sub-brand recently took the wraps off a Z17 mini packing Snapdragon 625 juice and 4GB RAM. Apparently, the “normal-sized” ZTE Nubia Z17 will feature 4GB RAM also, at least in a base configuration. Something tells us you’ll be able to bump that up to 6 gigs, and other ultra-high-end specs are definitely in the pipeline too. We just don’t know exactly what they are, where will the Z17 be launched, and for how much.