An extremely confusing benchmark appears to suggest the SM-G9600 model number designates a Galaxy S8 Lite of sorts rather than a Galaxy S9.
Published 13 July 2017, 04:07 EDT

What’s in a mobile device model number? Usually, you can tell a lot about a phone’s marketing identity, its target audience and even actual specifications by comparing the digits adopted in the pre-release stages with those designating existent products.

But OEMs sometimes like to be unpredictable and mix things up. For instance, Samsung followed the SM-G920 and 925, aka Galaxy S6 and S6 Edge, with a pair of flagships dubbed S7 and S7 Edge, or SM-G930 and 935, which made perfect sense.

This year’s Galaxy S8 and S8+ however skipped the logical SM-G94x denomination, using G950 and G955 aliases instead. Why? Tetraphobia, most likely, i.e. the same superstitious practice that called for OnePlus 5 branding rather than OP4.

Since 6 isn’t considered an unlucky number in any major culture, we obviously had every reason to expect the spring 2018 Galaxy S9 to carry the alternate SM-G960 label. But now we’re not so sure, seeing the “bad boy” produce lower CPU performance scores through Geekbench than the GS8. 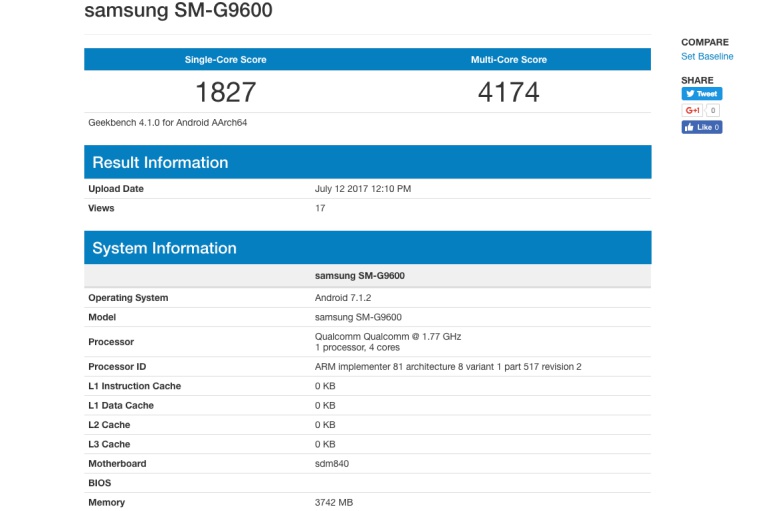 The weirdest part might be that this Samsung SM-G9600 prototype appears to pack an as-yet unreleased Qualcomm Snapdragon 840 processor (“sdm840” motherboard) with only four cores clocked at 1.77 GHz, not to mention a modest (by 2018 high-end standards) 4GB RAM.

As confusing as it sounds therefore, the SM-G960 could be a humbler device than the G950 and 955. Maybe a Galaxy S8 mini, Lite or something along those watered-down lines. Or perhaps this is indeed a super-early Galaxy S9 variant, tested for mysterious purposes while featuring an unfinished Snapdragon 840 SoC and mediocre RAM count. Also, Android 7.1.2 Nougat. All shall be revealed in due time.