Apparently, I have to install spyware on my phone in order to attend a Weird Al concert

If you enjoy supporting your favorite artists by attending their shows, watch out for the AXS ticketing app. It could be a nightmare!
Published 27 July 2019, 08:00 EDT

Some of you may already know about the AXS app that many concert venues and convention centers have started requiring that you use in order to enter the event.  I didn’t know about it until I bought 4 tickets to a Weird Al Yankovic concert online. I kind of assumed I would be able to choose to either leave the tickets at will call or print them out myself from a PDF.  It turns out, I was wrong!

Instead of a simple PDF QR code that I could print or save to my phone, after purchasing the tickets I was disappointed to see this screen:

Flash Mobile Delivery??  “To use these tickets, you need the AXS app.”  WTF??!  Why didn’t it simply email me a PDF like everyone else does? Why can’t it display my tickets in a web page?  For what reason do I need an app to use concert tickets?!

Now I like to consider myself a responsible netizen and technology aficionado, so I proceeded to do some research about this app before blindly installing it and giving it access to my phone and data.  It turns out, the AXS app has awful reviews and a horrible reputation. 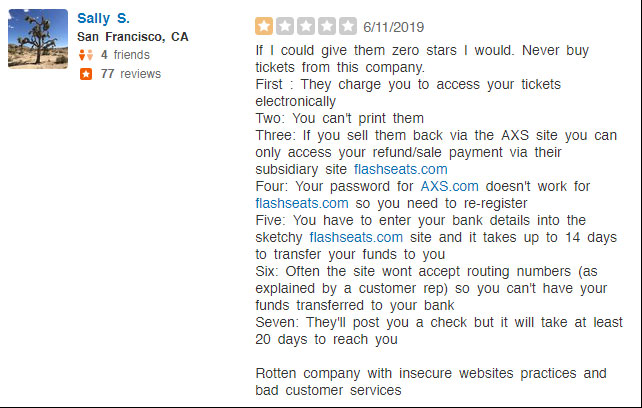 The company’s Yelp reviews are a solid one star… the lowest possible score. The reviews are filled with nightmare stories about AXS’s terrible customer service, dysfunctional app/website, and incompetence on AXS’s part. 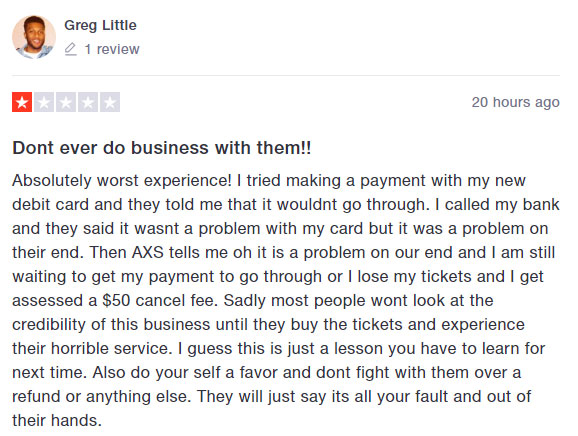 Another company reviews platform called Trustpilot is again filled with lowest-of-the-low negative reviews about the AXS company and ticketing service.

If you’re a gamer, you may be a fan of BlizzCon, a huge conference about Blizzard Entertainment’s video games. That’s going to happen in November of this year, and guess what… attendance requires the awful AXS app.  Twitter is very unhappy about it.

https://t.co/KKW6gCea2D
For Blizzacon 2019, you have to download AXS app if you want to attend. But don’t download it! It’s bad spyware!

Oh, by the way, it’s spyware 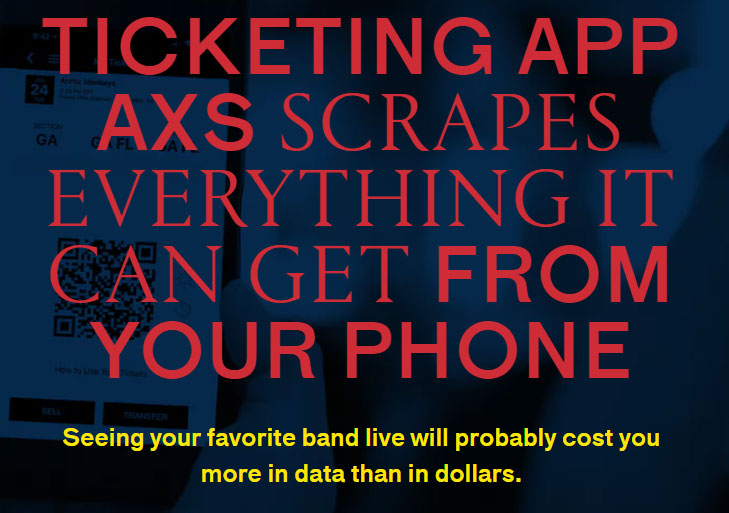 There’s an article on The Outline that goes into a lot of detail about the AXS app and how much data it’s designed to collect from your phone and subsequently share with all sorts of 3rd party companies for marketing, ad sales, and who knows what else. You can read about how the app scrapes your first and last name, precise location, how often the app is used, what content is viewed using the app, which ads are clicked, what purchases are made (and not made), a user’s personal advertising identifier, IP address, operating system, device make and model, billing address, credit card number, security code, mailing address, phone number, email address, etc. All of that data can be matched up to your other advertising profiles in other big-data collection companies like Facebook & Google in order to influence you in other ways… such as buying more stuff.

Some Reddit users have found that the app can be used to track your locations within a venue as well using Bluetooth beacons to promote discounts in a nearby food court or whatnot. The privacy-violating features are generally disguised as something that ads convenience, but the data collected can certainly be used for more nefarious purposes.

Other users on the Blizzcon forums think that it’s not that big of a problem since many many other popular apps do the same kind of thing and no one gives it a second thought.

How can you protect yourself?

In the 1980’s big banks realized that they could exert some control over society without going through politicians by connecting their networks and collecting purchasing data through credit card transactions. Today, tech companies are doing a similar thing on a much larger scale. Maybe they’ll use all of this information for the good of society as a whole… or maybe they won’t.

Personally, I still wanted to see that Weird All Yankovic concert at Forest Hills Stadium in New York. So I created an empty guest account on my Android phone with a new empty Google account that I could use to install the AXS app.  AXS already had my other spam email address and credit card info from purchasing the tickets, but at least this way, they wouldn’t get all of my contacts. Then I switched to the guest account when I got to the stadium, let the QR code get scanned at the entrance, and deleted the app shortly after. What’s strange is that the ticket scanning staff members at the door had to print out each ticket on paper as each person entered.  Why couldn’t I have done that myself?  Some venues and shows allow you to choose a different method of ticket delivery too, so be careful when you’re buying them and read the fine print!