What can auto makers do to better incorporate mobile technology?

A couple of years ago, Google and Apple both unveiled their latest mobile operating systems. No, I don’t mean mobile as in phones, I mean mobile as in cars. Since then, there has been a steady increase in adoption by auto manufacturers who are bringing this tech to the road. Last year, only a few car manufacturers were able to bring Android Auto and/or Apple CarPlay to their vehicles. This year, the list is much longer, and so it will go until not having a connected vehicle will be the exception rather than the rule. Connected vehicles are coming, do not doubt.

This is both a blessing and a curse though when you stop and think about it. The main problem with both of these interfaces is the interface itself. Both of these operating systems rely on in-dash screens which necessarily take eyes off the road. The road, for those of you who don’t drive, is where death awaits you. Which is why it’s important to keep your eyes on it, not your dashboard. 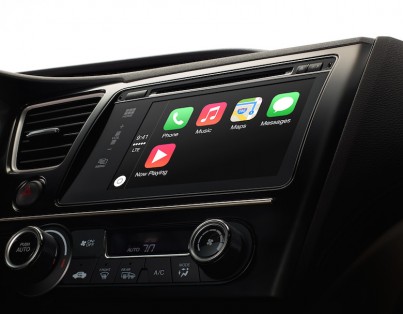 Eyes on the road

At a glance – and full disclosure: I haven’t used either system yet – it looks like Apple might be more off base here with CarPlay, since it replies on a big grid of icons to navigate it’s operating system. Android Auto is more of a tab/notification system, offering information at a quick glance, rather than forcing you to open a pretty icon to get the information you are seeking. But both operating systems require you to take your eyes off the road in order to process information on your dashboard, akin to your speedometer but with a lot more information than two (or sometimes three?) digit numbers.

So, since both of these systems seem to be flawed, I decided to participate in a little thought experiment on how both of these operating systems might operate better for the sake of you, me, and the poor baby in the stroller you may run down some day while checking Facebook on your dashboard.

Assuming that the visual interface is going to stay, automakers really need to start looking into and hard-core developing HUD technology. The heads up display, for those not familiar, is like having a screen on top of your windshield which could display relevant information to you without taking your eyes off the road. The concept has been used in other transportation technology for years, mostly built into helmets, but only started to show up in cars recently.

If the visual interface of CarPlay or Android Auto could be brought to a HUD, that would make it less dangerous to use. But, both Android Auto and CarPlay require a touch-screen interface. So maybe that won’t work so well. Maybe a combination of HUD plus Hololens-type clicking would solve that problem. I can’t see that being anything but a distraction while piloting a 2,000 pound box of death down the highway at 55 MPH.

Talk to me, Goose

Realistically though, the best solution would probably be some type of voice/audio interface which would enable to a user to issue verbal commands to the operating system to retrieve/display information. This is an area where the rise of bots and AI might make a huge impact. Memorizing a long set of commands to perform basic functions isn’t the greatest experience, so bringing in some AI to interpret your commands could go a long way. Some of the trouble there is that people would need to learn that the audible interface is actually there. That’s not necessarily something that would be discoverable.

We also run into the problem of legislation. Many states have laws on the books that prohibit drivers from utilizing in-dash or dash mounted screens while operating a motor vehicle. Other states have hands-free laws that require the use of a hands-free device for all calls. Still others prohibit mobile devices altogether in certain situations like construction zones. Since CarPlay and Android Auto are somewhere in the middle of mobile devices and in-dash screens, we’re going to have to figure out what’s cool and what’s not from these systems.

There’s a bumpy road ahead for adoption of car tech, no pun intended. The willingness of car manufacturers to so readily adopt the tech that Apple and Android are offering is both a blessing and a curse. Will we see drivers newly-empowered by their new technology, or will we see more accidents by drivers attracted to their pretty new screens? I have to think it will be a bit of both, but skewing more toward the Kenny Loggins Danger Zone. If the smartphone industry has taught us anything, it’s that this is likely a two-horse race, unless Pebble has designs on a car OS? Didn’t think so.

All that being said if CarPlay and Android Auto are to be running in our future automobiles, I for one am hoping that voice control is a much bigger part of their future than the screens on which they’ll reside.