Marshmallow up another 2 percent in August Android distribution, still lagging behind Jelly Bean

Marshmallow is spreading to new phones and tablets, but according to the latest distribution report, it’s still the fourth most popular Android flavor.

It’s certainly not surprising to still see the latest and, many say, greatest Android flavor savagely beaten by its predecessor in official Google share numbers for the week ending on August 1. Painful, sure, but not at all unexpected, despite 6.0 Marshmallow turning one soon, and 5.0 and 5.1 Lollipop (especially 5.0) sounding as reviled as the Great Plague for the vast majority of mobile users nowadays.

We can even understand 4.4 KitKat towering above build M, although the gap between the two is for all intents and purposes staggering. What’s most shocking and hard to swallow for Android aficionados however is no less than 16.7 percent of devices technically supported by Big G have been left stranded on a depressing Jelly Bean-decorated island. 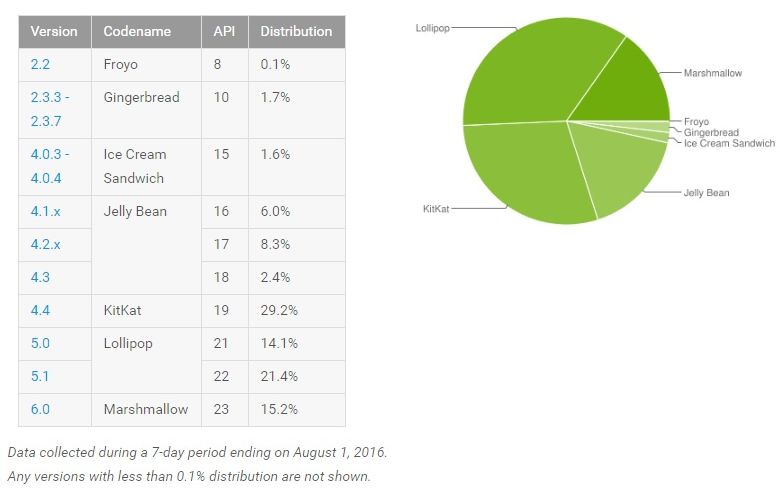 Meanwhile, only 15.2 percent run Marshmallow, up 1.9 points from early July, and double the May total. This is one sluggish climb to the top, even by the platform’s notoriously low standards, with 5.0 and 5.1 Lollipop combining for a dominant 35.5 percent share right now, and 4.4 KitKat following in second at 29.2 points. Worse yet, Lollipop actually managed to progress over the past month, albeit well within the margin of error, by 0.4 percent.

Brace yourselves, Nougat is coming, and based on recent history, it’s going to take a while to break into double-digit territory.