Notch haters will be ecstatic to see the LG V35 ThinQ rendered without any iPhone X-inspired screen cutouts, although that doesn’t make the unreleased handset original.

If you count the V30S ThinQ, LG has already unveiled two high-end smartphones so far in 2018, which is more than what other companies reportedly plan to release the entire year.

Believe it or not, there might be two additional LG flagships slated for commercial rollouts by fall, both part of the ultra-premium V family, also carrying “ThinQ” branding to highlight their advanced AI skills.

We’ve already speculated the LG V35 ThinQ could be the company’s AT&T-exclusive device due out “this summer” in lieu of the G7 ThinQ, and that very reasonable theory is supported by a purported visual leak of the (not so) mysterious handset.

AndroidHeadlines claims to have obtained a pair of high-quality renders from a “reliable” source, showing the Emma-codenamed phone in both black and gray paint jobs, with a so-called “premium glossy finish.” 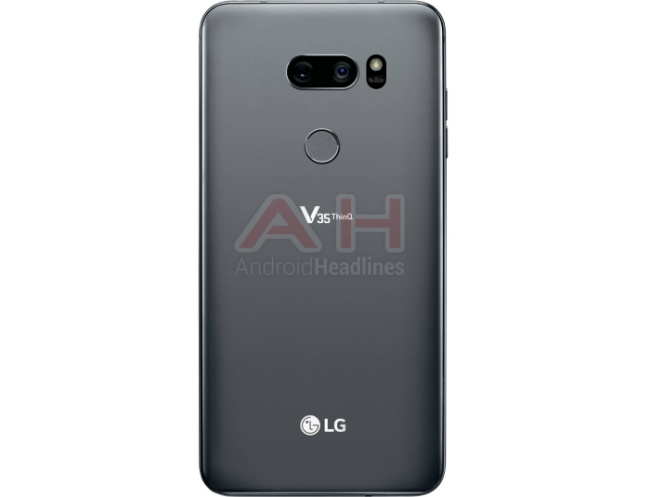 Typically, seeing an “all-new” flagship device resembling its predecessor so strongly would make a lot of people mad, but at least the LG V35 ThinQ looks set to snub the notch trend the G7 ThinQ so controversially embraced. Besides, you have to admit the V30 design just works.

That said, if a V40 ThinQ is indeed scheduled to arrive on the market mere months after the V35 ThinQ, which itself might launch shortly after the G7 ThinQ, you have to wonder if perhaps LG is trying too hard.

We obviously don’t know much about the V40 ThinQ, while the V35 ThinQ is rumored as a 2:1 6-inch OLED “FullVision” affair with QHD+ resolution, dual 16MP rear-facing cameras, a solid 80 percent screen-to-body ratio, 32-bit Hi-Fi Quad DAC, and an “emphasis” on AI, but with no side-mounted Google Assistant button in sight.