Within the wireless industry, AT&T earned top marks for customer care and is going after T-Mobile’s bragging about its Nielsen win.
Published 02 February 2017, 21:18 EST

With T-Mobile’s thorough bragging of its overall dominance in Nielsen’s customer satisfaction study done, AT&T is ready to lug its second J.D. Power Customer Care Full-Service Study win in just as many studies. And Ma Bell is firing at the Un-carrier for its mangling of data.

“Sure, everyone claims that they’re the best,” said Glenn Lurie, president of AT&T. “And they might hide some numbers of manipulate a chart to make themselves look better.” 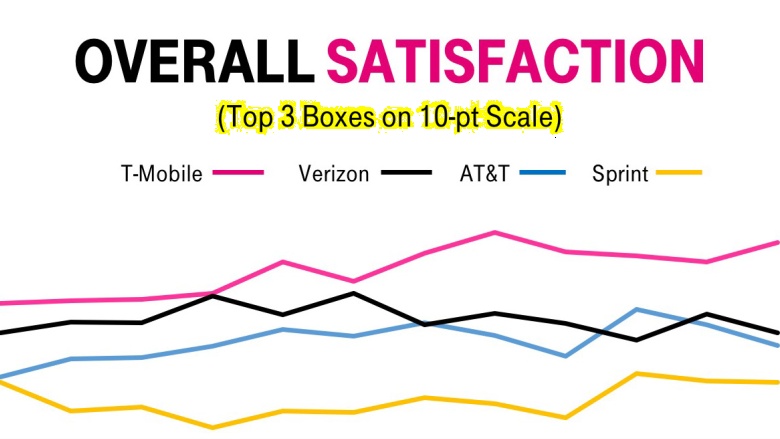 Taking a look at T-Mobile’s offered charts, we see that the data set the carrier used was limited to 1-10 rankings in the first few boxes for each category. Here’s the thing, though: these kinds of surveys have plenty of questions that can be sorted one way or another and not every question is pertinent to a category of performance being tracked. That said, the same data can be manipulated to support any point a carrier wants to make. We wish there was a little more transparency when it comes to studying these studies, but alas, corporations be corporations, right?

We can express the same doubts about J.D. Power’s data, too: 8.135 wireless customers in the US took part in monthly surveys from July to December last year. AT&T claims that its overall score jumped up by 7 points over the period and beats the industry average by 13 points. In the last four years, AT&T has earned the top ranking in five of these J.D. Power semiannual studies and second in three.

“There are a lot of so-called awards and surveys out there. But J.D. Power is the most respected and most significant,” Lurie goes on.

Boy, would it pay to have been any one of those 8,135 form fillers…

Today’s deals come from Amazon, and Walmart, with the Intel powered Apple MacBook Air, the Moto RAZR 5G and more devices on sale

Right now is a great time to snag Samsung’s budget flagship that offers everything from a 120Hz display to a powerful SoC and great cameras.