The as-yet-unannounced Asus ZenFone 5 Max is shaping up to be a respectable upper mid-range Android affair, based on a recent Geekbench visit.

Asus “only” unveiled three ZenFone 5 variants at MWC 2018 in Barcelona a couple of weeks back, compared to the half a dozen ZenFone 4 configurations made official roughly six months earlier, and slowly expanded across European, Asian and American markets in the ensuing months.

But you can probably bet the farm on the Asus ZenFone 5 family growing before long, possibly starting with a big battery-packing Max model recently benchmarked sporting some respectable mid-range features.

We’re talking a Qualcomm Snapdragon 660 SoC with eight CPU cores clocked at up to 2.2 GHz, up from the terribly modest Snapdragon 430 processor powering last year’s ZenFone 4 Max, and significantly faster than the SMD636 “platform” built into the “regular” ZenFone 5 too. 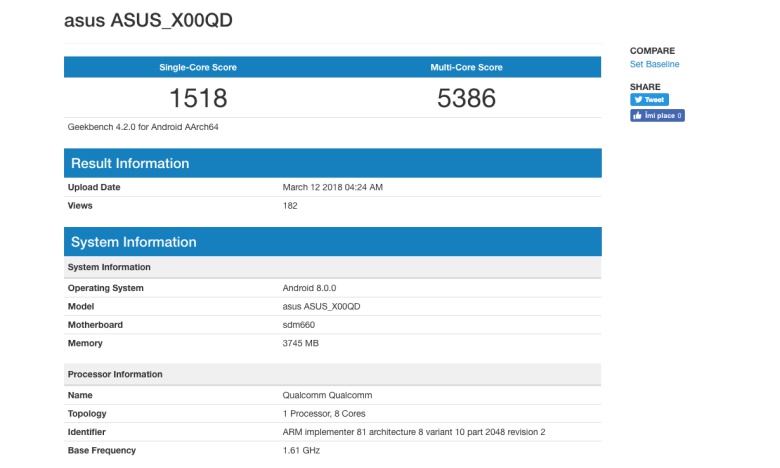 For once, this sounds like more than a battery powerhouse, also packing 4GB RAM, and already running Android 8.0 Oreo on the software side in a pre-release Geekbench visit.

Technically, the Asus X00QD is not explicitly listed as a ZenFone 5 Max, so it could end up carrying a different name when it hits stores shelves. A notch design is pretty much guaranteed either way, and there’s also gossip of a 5.7-inch screen with FHD+ resolution, as well as a fancy rear-facing dual camera setup. Of course, if all of this pans out, a substantially higher price point than $200 is to be expected.