Feeling a little envious of smartphones with 3GB of RAM? Plenty of recent flagships have already made the step forward to offering such memory capacity, models like the Galaxy S6. But even with 3GB becoming more and more common, you can still pick up a phone that puts you further ahead of the curve, with the arrival of the first 4GB models. ASUS stands out not just for being one of the first manufacturers to deliver Android handsets with such an excess of memory, but also because of just how affordably it’s doing so. After hearing about a launch in Taiwan earlier this month, we’re now about to see the ZenFone 2 descend upon Europe, with that 4GB option in tow.

ASUS France has been tweeting about the phone’s pending arrival, with sales set to start as of tomorrow. There you’ll pay just about 180 EUR for the ZenFone 2’s five-inch edition, with 2GB of RAM and 8GB storage. For closer to 250EUR you can step up to the 5.5-inch 2GB/16GB model, and at the top of the heap we have the big 4GB RAM 5.5-incher, with a 1080p screen, 2.3GHz SoC, and 32GB local storage. You’ll pay just under 350EUR for that premium edition.

Those prices are all a little higher than we saw when the ZenFone 2 came to Taiwan, but all things considered, they’re still pretty damn affordable; where else are you going to see a 4GB RAM smartphone selling for what works out to under $400?

Better still, there’s an introductory promotional offer that will net shoppers a discount on the 4GB model, bringing its price down closer to 300 EUR – not too shabby. 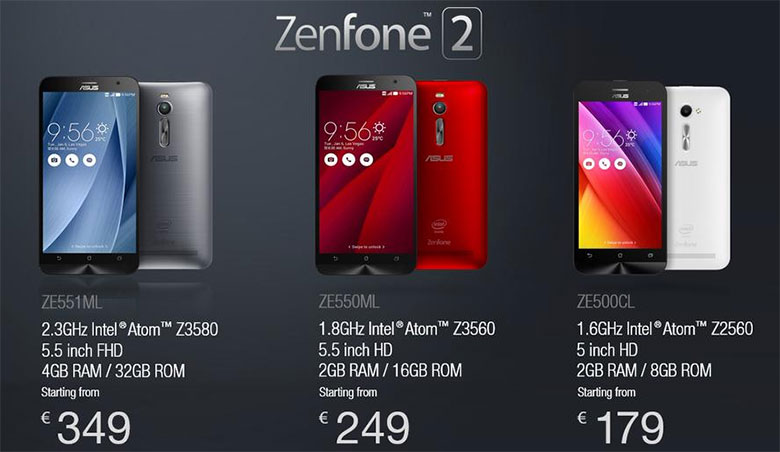