As more drama continues with the Apple vs. Samsung trial, you might remember the news last week of Apple’s sales team worried because of the threat that Android was becoming. Obviously those documents were just the beginning, and as the trial continues today, we’ve come across more documentation relating to the same topic, this time with some visual graphs that reveal how Apple is not taking advantage of the market growth.

According to the graphs, the biggest smartphone demand is actually coming from devices with bigger displays at a more affordable price, and Apple acknowledges that it doesn’t have a product for this market. Apple also manifests its worry over the fact that carriers aren’t happy with making business with Apple because of unfriendly policies and lack of alignment. Even more important, as the documents revealed last week, Apple continues to worry about how competitors are improving hardware and ecosystems.

Apple’s final document shows that the smartphone market grew by 228M units last year, and that it didn’t perceive any of this growth, mainly because the consumers in the sector were all buying smartphones bellow $300, and with displays bigger than 4 inches. Could this be the reason why Apple wants to launch a phablet this year with the iPhone 6? Time will tell if this is how Apple plans to counter attack, as the company documents show how that the company understands that it doesn’t have what consumers want lately. 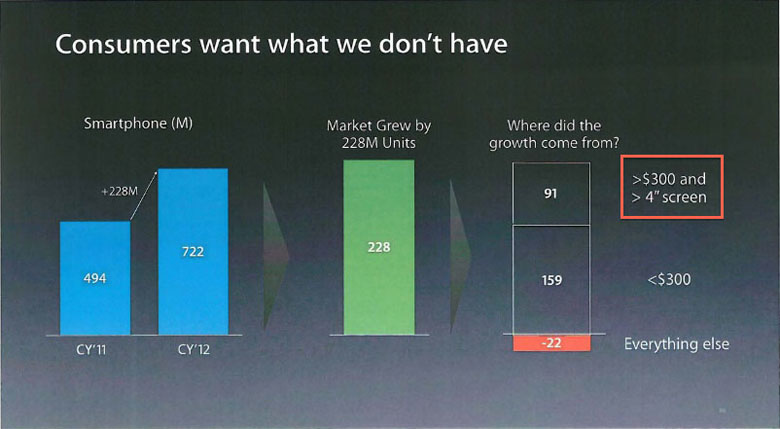 Samsung Galaxy S7 has been receiving quarterly updates with Android security patches after getting its last major OS upgrade in the form of Android Oreo.

Why would you want to run Gallium Linux on a Chromebook, when Chrome OS has Crostini Linux support built in? Read on for the answer.