Smartwatches can pack a ridiculous amount of tech into tiny spaces, and this is very much true for one of the latest wearables to hit the scene, the Apple Watch. We’ve already shared with you a teardown that documented the smartwatch’s construction, from the Force Touch screen to the troubled Taptic Engine. But that stopped short when it came to one all-important component: the S1 “integrated computer” that powers the wearable. Now we’ve got a chance to peek under the hood there, too, as a decapsulation attack reveals the silicon hiding within.

Unlike the system-on-a-chip that you’ll find in many smartphones, Apple takes things one step further with the S1, more accurately described as a system-in-package component. The difference here is that an SiP contains multiple physical chips all assembled together, allowing for quite a bit more flexibility with design.

We see the main processor, the watch’s 8GB of flash memory, 512MB of RAM, and the communication chips it needs for talking with the outside world. Those are joined by some power management components, including one just for the wireless charging system Apple went with. And while the irregular shape of this all may make the S1 look a little odd (especially in comparison to traditional SoCs), it’s what lets the S1 fit in those cramped Apple Watch internals. 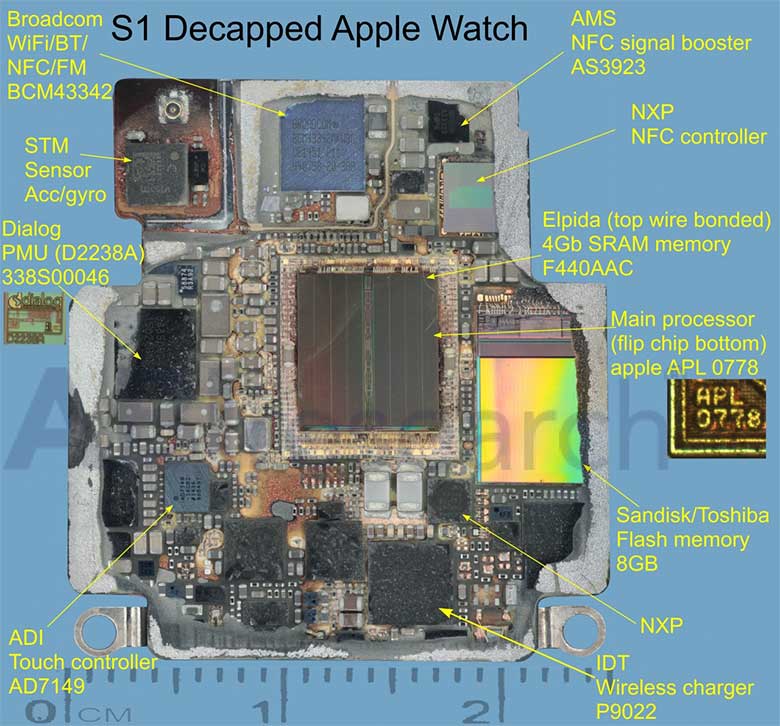 It will also have SpO2 Monitor feature to track oxygen saturation levels in the bloodstream.

Today’s deals include the 27-inch Apple iMac, the Razer Blade Stealth 13, and more products from Amazon and B&H Photo Video