Apple and Samsung now own 106% of the smartphone profits?

Even though Apple and Samsung are constantly attacking each other in the courtrooms, both companies do have two things in common. On one hand, both companies build smartphones with parts made by Samsung, and in the other, both companies own the smartphone markets at the moment. What’s interesting is when you have a look at exactly how much of the market these companies own, which according to a recent study, even exceeds the amount of profit available, once you consider that there’s no such thing as profits above 100%, right?

A new report by Canaccord Genuity claims that between Apple and Samsung, both companies own 106% of the global smartphone profits. Obviously the first thing that comes to mind, is how can you have a profit number that goes beyond 100%? According to the study, competing companies like HTC, Nokia, Motorola, & Blackberry are all losing money, and that would account for that extra percentage we’re still trying to find some sense into. According to the report, the company that makes the most profit is Apple, owning a 65% of the industry profits, while Samsung owns 41%. The study also mentioned that the reason why Apple is making more money is due to the device operating margins it has of 37% compared to Samsung’s at 22%.

Again, we’re still finding that 106% to be kind of impossible, not just because of it’s not a possible number in profits, but also because we know how companies like Lenovo dominate China. It’s far-fetched to consider that only Apple and Samsung are making money, but we’re sure they do own a big chunk of it. 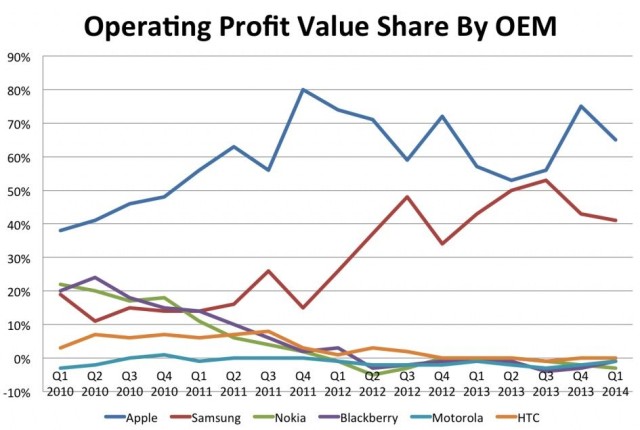 Via: Cult of Mac

The new Huawei P40 series is coming soon, and we have gathered the most important rumors in one place so you can get up to speed