Apple is eating Samsung’s market share even in South Korea

Learn more about how Apple is challenging Samsung’s market share even in South Korea, as new reports claim that the iPhone is growing fast in Asia

It’s regularly common for the citizens of many countries to show a certain degree of pride and nationalism for the products made in their respective territories. That has slowly changed though, as the whole concept of “Made In America” stopped being important in the US many years ago. You’d think that this would be important in countries like South Korea, and especially with Samsung’s world dominance of the smartphone market, but it seems to be slowly fading away.

Counterpoint Research has just revealed some numbers for South Korea, and according to the report, Apple has broken records, even in Samsung’s turf. Apple reportedly owned 33% of the market share between October and November, and Samsung remained with a 46%. Obviously these were the months when the iPhone 6 and iPhone 6 Plus launched, so that could have a lot to do with the growth in sales. What’s most shocking about these news is that the report claims that this is the first time that any foreign company earns more than 20% in market share.

Apple has done a good job in selling the iPhone 6 and iPhone 6 Plus over the last couple of quarters. Let’s see how long these records last. 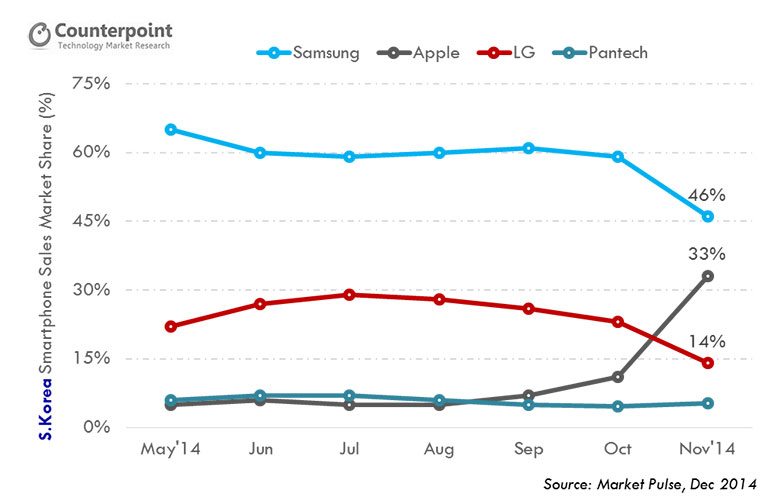