Learn more about Apple’s launch of iOS 8.1, which just went public for everyone. There are some significant enhancements coming, including Apple Pay.
Published 20 October 2014, 13:25 EDT

Apple’s event last Thursday was mainly about iPads and Macs, but the company did take some time to give us information on its new software updates. One of the major changes Apple is pushing to its mobile devices is iOS 8.1, which includes some very needed bug fixes, and even some new enhancements. Cupertino promised the update would reach iOS devices today, and the wait is finally over.

Apple has just launched its OTA update to iOS 8.1, and as long as you’re rocking any iPad after the iPad 2, or any iPhone after the iPhone 4s, you should be getting the update right this minute. The list of changes is vast, including several bug fixes to Wi-Fi performance, Bluetooth hands-free performance, screen rotation issues, Safari video playback, accessibility improvements, etc. One fix that was highly requested by iOS 8 users was the return of the Camera Roll in the photos app, and that has also made its way to the update. You’ll also notice that Apple is adding access to its beta of the iCloud Photo Library as well. The loop between the Mac, the iPad and the iPhone is also finalized for Continuity and Hand-off as of iOS 8.1, another highly-anticipated feature. Apple is also using this update to roll out Apple Pay in the United States, though keep in mind this specific Apple Pay update is only compatible with the iPhone 6 and iPhone 6 Plus at the moment.

Be sure to either hurry and download the update now, or be patient as Apple’s servers will most likely be jammed in the next couple of minutes. 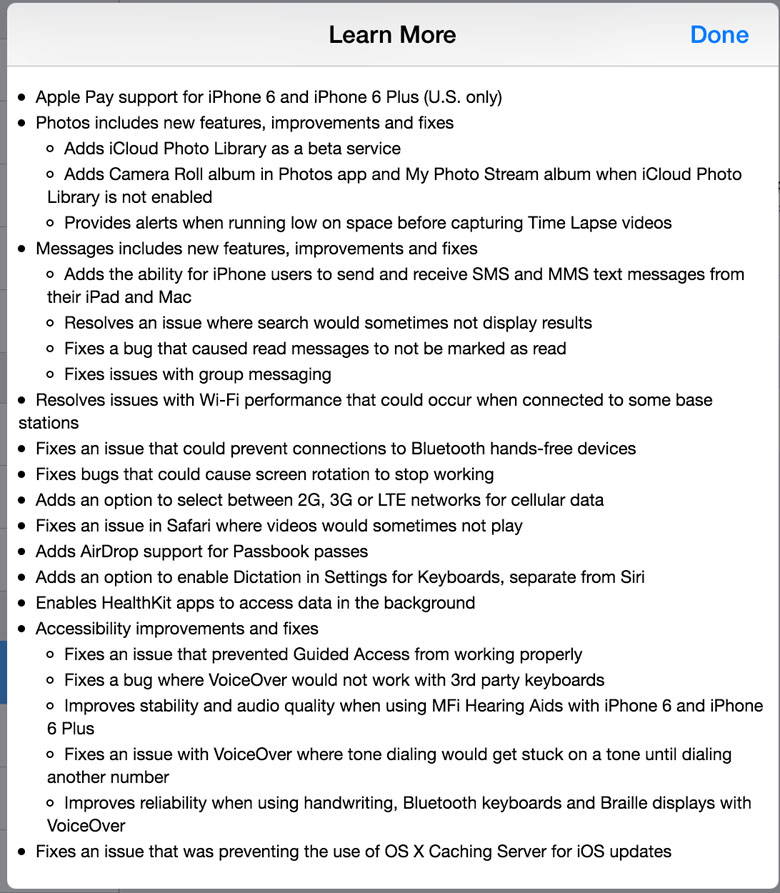