Apple Pay off to a good first month it seems

Learn more about the possible progress of Apple Pay during its first month in the market, as it seems that Apple is off to a very good start.
Published 22 December 2014, 14:14 EST

Even though Apple didn’t invent mobile payments, we all know that Cupertino is famous for arriving late at certain markets and making these take off. Google has struggled for years to make Google Wallet famous, and even if the service still exists, we rarely see any improvements over the already failed market strategy. Google’s failure in mobile payments, and the reluctance of certain retailers over Apple Pay made us skeptical over its possible success at launch, but it seems that there’s not need to worry.

Reports already claim that Apple Pay was able to claim 1% of the digital payment dollars within the month of November. The study reveals that 60% of the new Apple Pay customers were bold enough to use the service multiple times, compared to services like PayPal that only saw 20% of continuous adoption. The usage pattern also shows that customers used Apple Pay for in-store NFC payments 1.4 times each week, and that 66% of these users continued to use the service in subsequent visits. If you’re wondering which stores found more users of Apple Pay, well Whole Foods accounted for 28% of payments, while Walgreens followed as a close second with 19%.

Do you think Apple did a good job in figuring out mobile payments as well? Metrics tell us a lot, but we’d love to hear your thoughts in the comments as well. 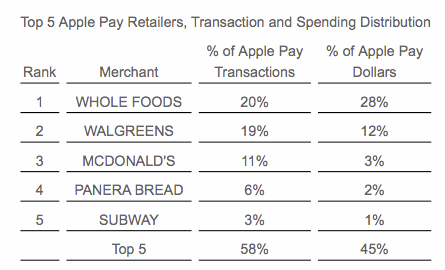