Siri could soon gain the ability to recognize whispers and whisper back in response to privacy-concerned users, according to a 2016 Apple patent filing.

Focused on making iPhones more technologically complex (and expensive) than ever, as well as truly independent smartwatches, relatively affordable iPads and crazy powerful iMacs, Apple may have neglected Siri’s progress over the past couple of years.

As such, it probably shouldn’t come as a surprise that the iOS, watchOS, macOS and tvOS-supporting intelligent assistant has started to lose ground to younger, bolder, constantly evolving rivals from Amazon, Google or Microsoft.

While not entirely original or groundbreaking, a new feature possibly eyed for Siri integration in the near future could help the AI return to the spotlight, at least for a short time. According to a patent application filed back in June 2016, but only published on USPTO’s official website yesterday, Apple is exploring a way for its digital assistant to provide whispered speech. 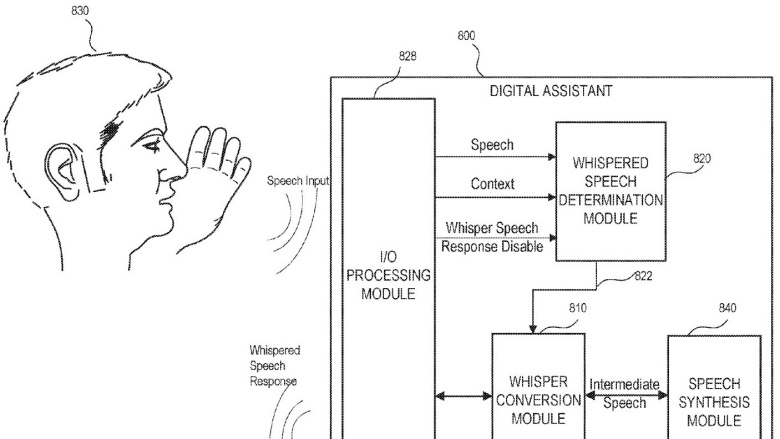 That would be particularly useful in conditions where speaking loudly is frowned upon or even altogether prohibited, like during a long studying session in a quiet library. Or while “attending a meeting in a conference room with other meeting participants.”

Protection of user privacy is a primary goal of this prospective Siri-enhancing technology, which could detect the time and place a whispered response to a voice command or question is more appropriate than a “normal”, loud or moderate reaction.

Basically, Cupertino wants to develop certain “systems and processes” capable of understanding speech input to identify soft-spoken commands. In other words, you’d whisper to Siri, and she’d suavely whisper back without you having to do anything else. Unfortunately, the world’s number two smartphone vendor files for so many patents every month that this particular one could already be long forgotten.