Get all the details on the Apple new iPad announcement, as the company’s event gets underway in California.
Published 22 October 2013, 14:08 EDT

Nokia’s latest announcements may still be fresh on our minds, but it’s already time to shift focus and check out the other big news of the day: Apple’s iPad event. We’ve been looking forward to these new tablets for months now, and it’s finally time to make them official.

In California this morning, Tim Cook took to the stage to get things started, taking a moment to reflect on the success of the new iPhone 5S and 5C, describing the launch as Apple’s biggest to date. Cook also had plenty of good things to say about iOS 7, claiming that Apple’s users “love the bold new redesign” and hundreds of millions are now using the updated platform.

From there, we took a little detour (at least, in terms of our mobile interests), getting into OS X Mavericks stuff. If the day ever comes when Apple pulls a Microsoft and its desktop OS starts bleeding into its tablet lineup, then maybe OS X will catch our attention, but today our focus is solely on this new iPad lineup.

After sitting through all the announcements of new Mac hardware, followed by software news, we finally got to the good stuff:

The new iPad is no “iPad 5” after all, but getting a new name – the iPad Air. 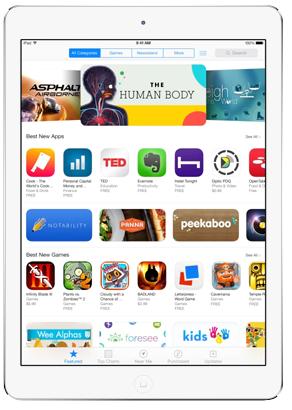 Just like the iPhone 5S, the iPad Air is powered by an A7 SoC, with the same M7 motion coprocessor. Earlier, we saw a measurement of 7.35mm for the tablet’s thickness – that turns out to be close but just a little off, and the real thing will measure more like 7.5mm thick. Weight sees a big cut, too, dropping to just a single pound.

Wireless speeds are enhanced with WiFi 802.11n support via MIMO antennas, and the tablet should enjoy a ten-hour battery life. Apple credits that to the A7 SoC, explaining, “the A7 chip is more efficient, the battery could get smaller without sacrificing battery life.”

Apple’s giving the iPad Air a five megapixel iSight camera, as well as an updated FaceTime front-facer with larger pixels for better light sensitivity. Color options will include silver/white and space gray/black. And of course, we’ve got those slimmer side bezels, iPad-mini-style.

Pricing starts at about $500 for the 16GB WiFi-only version; cellular support brings that up to $630. The tablet will ship all over the world, beginning November 1.

While the Air will replace the fourth-gen iPad, Apple’s keeping the iPad 2 around, selling for $400, with 16GB and WiFi.