You can get a second 3-month Apple Music trial for free if you receive a push notification on your phone like the ones we see here.
Published 09 February 2019, 19:00 EST

Apple is offering a 3-month trial for its Apple Music offering. You can use the service without any limitations, for free, during those three months. At the end of the trial period, you can continue using the service for your regular monthly or yearly subscription, or you can cancel, without being charged.

Several people are reporting Push Notifications landing on their phones to try Apple Music. What’s interesting, is that these people were at one point either Apple Music subscribers, or opted out before the trial period ended. What’s even more interesting is that Apple seems to offer a second 3-month trial to people who already took advantage of that.

Apple Music has managed to snatch a comfortable position on the market, but with heavy competition from Amazon, Google, and Spotify, the iPhone-maker is obviously doing everything in its power to get back its former users, or lure new users and lock them into a subscription.

Have you received Apple Music notifications like the ones below? Let us know! 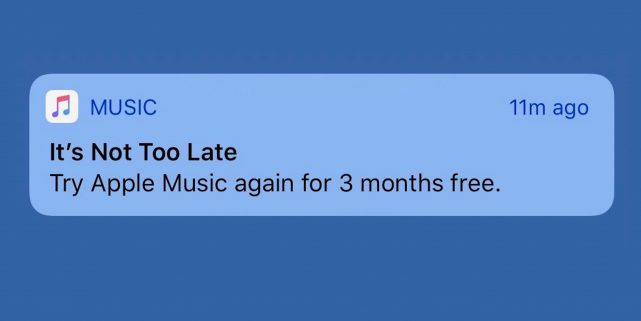 We’re showing you how to delete your WhatsApp account, as well as some pre-requisites that I personally recommend before you do so.

Google’s adding an entertainment hub to Android tablets that aggregates video content, game, and books, and is calling it Entertainment Space.

As per the new report, producing the 12.9-inch model’s new MiniLED screen has so far…