Apple’s iPhone X was the world’s top-selling Q1 2018 smartphone, followed by iPhone 8 and 8 Plus

Even if the iPhone X is indeed “dead” and buried, with its sales rate set to decay even further until those three sequels arrive in the fall, triggering the original’s early demise, it seems that Apple has every reason to be proud of the commercial performance of its first “all-screen” handset.

Not only did this help the Cupertino-based tech titan make some serious cash in the world’s largest smartphone market, reportedly outselling every other mobile device available around the globe between January and March 2018.

Strategy Analytics estimates a whopping 16 million iPhone X units were shipped worldwide during the year’s first quarter, while the iPhone 8 and 8 Plus completed the podium with pretty impressive 12.5 and 8.3 million totals of their own.

Believe it or not, Apple had the quarter’s fourth most successful handset as well, the iPhone 7, with the Xiaomi Redmi 5A following in fifth place, and Samsung’s Galaxy S9 Plus having to settle for a modest sixth. 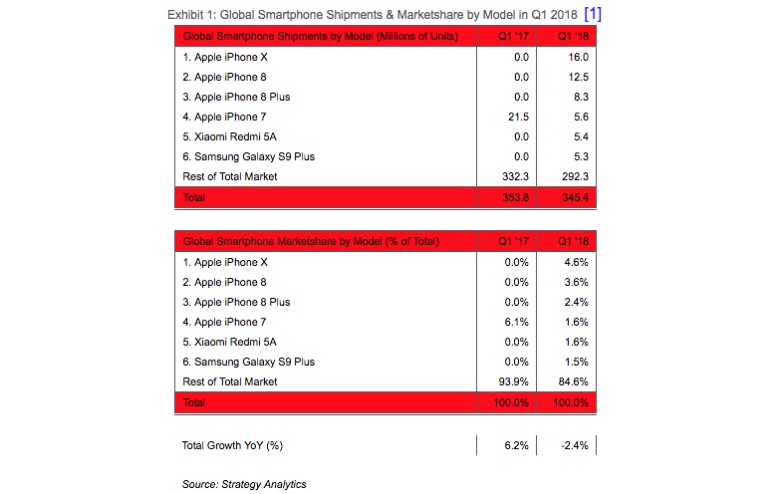 Of course, the GS9 and S9+ made their commercial debut close to the end of Q1, so the latter’s 5.3 million unit shipments are nothing to sneeze at. Meanwhile, we already knew Xiaomi killed it in India largely thanks to affordable new Redmi-series devices, but we didn’t expect the 5A to rack up 5.4 million unit shipments so fast.

Looking ahead, Strategy Analytics thinks the Galaxy S9+ has what it takes to become the world’s top-selling Android smartphone in the second quarter of 2018. But will the “Infinity Display” 6.2-incher be able to eclipse Apple’s always popular iPhones before new ones enter the ring? It’s obviously way too soon to tell.

OnePlus’ net revenue from the European market also went up by an impressive 286% in the first quarter of 2021.

Check out the latest deals on Android smartphones. We find great savings on the Samsung Galaxy Z Fold 2, the OnePlus 8 Pro and more